The powerhouse: America, China and the great battery war 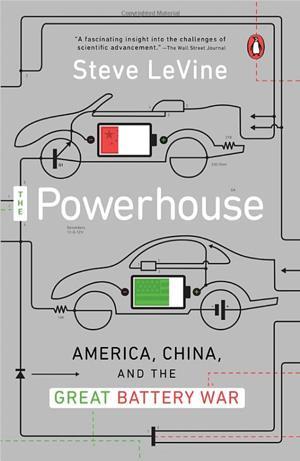 Before reading The powerhouse, I’d assumed the world of battery research was populated with straight-faced engineers, quietly refining their designs for the benefit of e-book readers and humanity alike. Steve LeVine describes an emotionally-charged world of fierce competition, corporate espionage and personal politics.

At the centre of the narrative is Argonne National Laboratory, the titular US powerhouse of battery development, from its Manhattan project origins and location on a hot dog manufacturer’s country estate to its current status as centre of excellence for energy storage. LeVine certainly does a good job of giving us a handle on its hugely influential residents whose work powered the great American achievements in battery technology. Insightful anecdotes punctuated by choice exchanges highlight the often bitter rivalry and intense pressure to outperform, with squabbles over who invented what a recurring feature.

Later chapters focus on the interconnected stories of Argonne’s recent bid to house the US ‘Battery Hub’ to challenge international rivals, and California startup Envia’s troubled partnership with General Motors. The latter is a cautionary tale of venture capitalism, intellectual property and delivering high-stakes science.

Focusing on human chemistry rather than battery science, The powerhouse was an accessible read, with moments of real insight. Yet there is only so much bitter rivalry one can handle – the continued one-upmanship was exhausting rather than exciting. Excessive detail on laboratory trivialities and business deals left me feeling that the book’s 300-odd pages could have been condensed into a more powerful AAA-sized read. By focusing on so many stories, seemingly without a clear narrative, it felt more like a series of interesting anecdotes rather than a story with a message for the future of battery development.

Fascinating, surely, for those well connected in the battery scene. But for those not on the research circuit, it may leave you feeling flat.