Where art and science meet 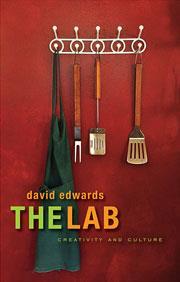 This book describes a special kind of lab which breaks down the traditional boundaries between arts and science, potentially creating a new platform for innovation.

David Edwards was trained as a chemical engineer and worked on the delivery of drugs such as insulin through aerosols. At the same time he started creative writing as a sideline, and this interest in the arts as well as science led in the early 2000s to conversations at Harvard about ways to achieve a creative fusion of art and science.

It was in Paris, where Edwards was partly living, that his ideas first bore fruit. In 2007 he founded Le Laboratoire where artists, such as musicians and designers, could work together with medical scientists on a variety of art-science installations. Some projects were basically educational and humanitarian in nature - such as an installation exploring the neuroscience of fear and healthcare for the poor - but many produced innovative products, such as breathable chocolate (from his aerosol background), microbiotic lamps to light African villages and plant-based air filters.

Edwards believes that this cross-pollination of creative ideas of artists and scientists, coupled with a willingness to take risks, could increase the innovative capacity of laboratories around the world - creating what he calls ’innovation funnels’ and ’idea translation labs’. Many idea translation labs already exist in Boston, Oklahoma, Dublin, Dhahran, Paris and other cities.

Art-science projects have taken place in The Lab at Harvard University, the Wellcome Collection in London and the Science Gallery in Dublin. Chemistry World (November 2008) described a creative initiative at the Institute of Contemporary Arts in London where Nobel scientists (for example John Sulston, Aaron Klug and Peter Mansfield) worked with artists to design installations that conveyed the inner meaning of their work to wider non-scientific audiences.

It is inspiring to read a book about a man who combines being a scientific researcher with an artistic visionary, coupled with a genuine concern for humanitarian issues around the world.