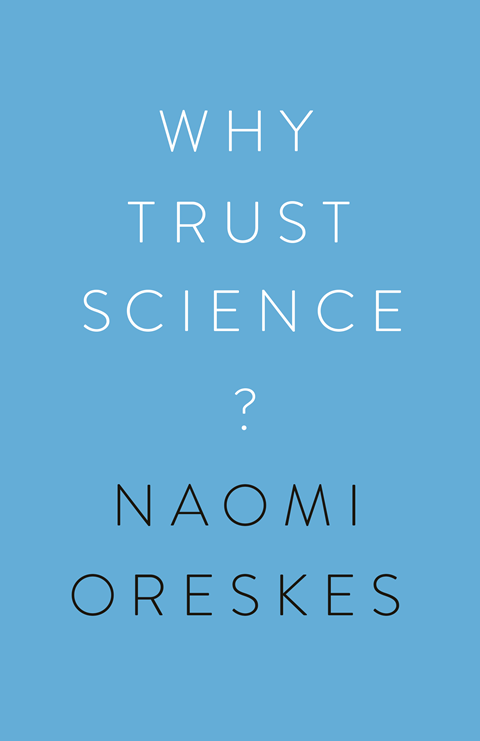 Naomi Oreskes is professor of history of science and affiliated professor of earth and planetary sciences at Harvard University in the US. The book is based on her 2016 Princeton University lectures on human values, and commentaries on these lectures from experts in related fields. As such, it isn’t light, easy reading. But don’t let this put you off, it is very much worth taking the time to read.

Oreskes is eloquent, insightful and bold. At a time where we are still confronted by climate change deniers and the anti-vaccine movement, and ‘the fragile status of facts – both scientific and social – is now so widely acknowledged that the Oxford English dictionary declared the 2016 word of the year to be post-truth’, it is easy to see why a book like this is so important. When I finished reading Why Trust Science?, I felt inspired and informed. I wanted to talk to people about it, as evidenced by the long list of people now waiting to borrow it.

Oreskes begins by discussing philosophical arguments relating to scientific understanding through history, building a convincing case for informed trust in scientific consensus. She particularly focuses on the idea of science as a social activity. The author then goes on to discuss the interaction between politics and science, how people’s personal interests can cause them to dismiss science and the damage done through campaigns of deliberate disinformation. Oreskes also makes clear the need for a diverse and open scientific community with ‘recognised and robust avenues for criticism’.

I enjoyed reading Why Trust Science? because it dismantled arguments I had previously been tempted to use myself. It surprised me with new ways of thinking. One of the book’s real strengths is that I did not feel it is arguing for blind trust in any scientific theory or activity. Instead, it provided me with a better understanding of why, when and to what extent we should trust science.

The books points out that one of the major arguments that people cite for their distrust a science is the fact that scientific beliefs change over time. As Oreskes puts it: ‘If scientists sometimes get things wrong – and of course they do – then how do we know they are not wrong now?’ To answer this, she looks at several examples where science got it wrong – such as the long-disputed evidence that hormonal birth control can lead to depression – and outlines lessons that can be learnt from these cases.

The commentaries that provided after Oreskes’ initial discussions are a great addition to the book. Their inclusion mirrors the criticisms and openness the author highlights as so important for science.

This thought-provoking, timely and comprehensive book is a must-read. I would strongly recommend it not just for those who find themselves frustrated by the current atmosphere of distrust in experts or in science, but for any policymakers, scientists, teachers and people who are studying – or are simply interested in – science.