Leanne Hart's passion for encouraging people into the chemical industry prompted her to apply to become its young ambassador. She tells Katie Gibb about her year

Leanne Hart’s passion for encouraging people into the chemical industry prompted her to apply to become its young ambassador. She tells Katie Gibb about her year

Leanne Hart’s career took a new direction when her manager left an application form on her desk. ’I filled in the form with my views of the chemical industry and how I could help promote it,’ she says. A few months later she found herself competing against other regional finalists to become the UK chemical industry young ambassador 2005. Each regional finalist was invited to become chair of their region for the Young Persons’ Network (YPN); Hart won and became the national chair. 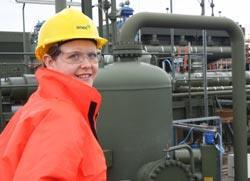 YPN is the young person’s arm of the Chemical Industries Association, the UK’s leading trade association for the chemical and chemistry-using industries. Aimed at encouraging young people into the industry and assisting their professional development, YPN welcomes anyone under 35 who works within the chemical industry. ’I’d have been a member beforehand if I’d known about it,’ says Hart.

Hart has a background in engineering, although she hasn’t always had an interest in the subject. ’When I was growing up in school.I didn’t realise that there were opportunities out there,’ she says. ’I thought that an engineer was someone who would come and fix the car.’ She developed an interest in the profession through work experience before studying chemical engineering at Loughborough University.

As YPN national chair, Hart first and foremost promotes the network to others. Although for her the opportunity to find out more about a career in the industry came though work experience, she believes there are still many young people missing out, a belief that inspired her to fill in the application form. ’It was mainly to show people that opportunities are available in the chemical industry, I’m quite passionate about that.’

One of the first events she organised as YPN chair was a kick-off meeting in the northeast, a region where the network had previously been poorly represented, to discuss promotional ideas. Hart has subsequently been involved in producing promotional materials and a huge number of events over the past few months, such as organising industrial site tours, innovation talks and events in schools and colleges to promote the chemical industry. She believes that YPN really makes a difference, especially with school visits. ’A young person going into a school can be very inspiring,’ she says, ’especially when talking about the things they do and places they’ve travelled to.’

On a national level, she has been involved in organising the annual two-day conference, an event aimed at getting together young people from all over the country. ’The whole point of the YPN, as the name suggests, is just to get young people in the industry talking, so our events are primarily networking events,’ she says. She has also conducted radio interviews, had media training, appeared on television, entered the House of Commons and met a large variety of people at dinners.

Hart combines this with her job at Amec, an international project services company, where she works on gas storage projects and a compression station to help secure the supply of gas to Britain. As part of Amec’s graduate scheme, Hart enjoys huge variety in her role, working on the design of projects both in the office and on site.

But with so many events to plan for the YPN, how does she find the time? ’Amec has been brilliant,’ she says, explaining that the company allows her to spend time during her working week on ambassador duties. ’I’d say it takes one day a week for organising events. It’s a big time constraint and takes over your life for a year, but it’s definitely worth it.’

Hart enjoys speaking publicly and networking with a variety of people, and says that the challenging role has allowed her to develop her communication and organisational skills. ’The opportunities I’ve had have just been amazing, I’ve met people and done things that I just wouldn’t usually get the chance to do.’

When her year as national chair comes to an end, Hart plans to complete her professional qualifications to become a chartered engineer. She then hopes to move into business development and take on a more challenging role, perhaps in management. ’I’d also like to make a difference to the company,’ she says. ’I think you should be passionate about what you do, tell people what you are interested in and don’t be too shy to fight for what you want.’