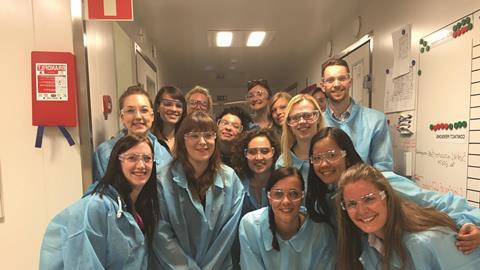 Three years after her first visit, Manisha Lalloo catches up with the graduates of AstraZeneca’s training scheme

In September 2013, AstraZeneca welcomed its first set of graduates to its Alderley Park site in Cheshire, UK, quickly followed by intakes at both its Swedish and US campuses. This was the start of the company’s graduate programme in Innovative Medicines and Early Development (Imed), launched to boost new talent at the organisation. The two-year programme offers science graduates three separate eight month rotations across the Imed team, providing a broad exposure to basic and applied scientific research at AstraZeneca.

Today, with a total of 95 graduates having being accepted across AstraZeneca’s UK, US and Swedish sites, the Imed graduate programme forms an integral part of AstraZeneca’s recruitment strategy.

In January 2014, Chemistry World met Lindsay and Kathryn, two of the first UK graduates to join the programme. Now, three years on, how have they found the experience?

Lindsay joined the programme having just completed a sandwich year at AstraZeneca as part of her degree, and had wanted to stay on to explore different areas of the pharmaceutical industry. ‘I did my placement year in analytical chemistry and I wasn’t sure if I wanted to stay in that area,’ she says. ‘It drew me in because I thought I would try out some different areas to help me decide what I could do further.’ 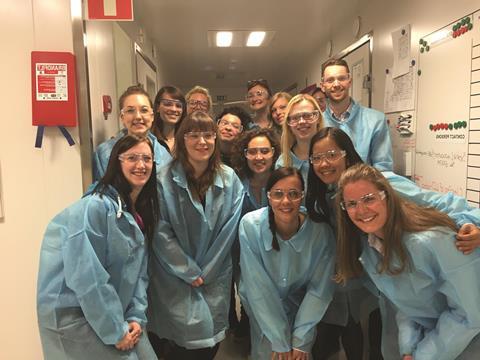 Kathryn felt similarly. She joined the programme in September 2013, to get a better idea of where her interests lay. ‘I saw this opportunity to get experiences in three different areas of drug discovery and find out what I wanted to do. I wasn’t positive on the exact career I wanted to do at that stage. I knew chemistry interested me but didn’t know exactly where I wanted to go.’

Both women used their time on the programme to explore different aspects of research offered at AstraZeneca. For Kathryn, this included a placement in medicinal chemistry, followed by a stint in computational chemistry and then a final rotation in early clinical development. This took her all the way from the lab where she made synthetic compounds, through to working on clinical trial protocols. Ultimately, it was the computational work that appealed most – and this is where her career has headed.

‘I really enjoyed exploring computational design methods and learnt a lot of new computational techniques. But one of the things that I found from that placement was that I wanted to go into more depth than I had time to do,’ says Kathryn. She therefore chose to do a PhD once she completed the scheme in September 2015. AstraZeneca part funds her PhD; today she spends half her time working at AstraZeneca’s new Cambridge site and half at Cambridge University. She has both an industrial and academic supervisor and hopes to return to a role in industry once her studies are done.

Lindsay, meanwhile, stayed in industry, joining Redx Pharma, a biomedical start-up also based in Alderley Park in Cheshire, in October 2015. ‘I’m an associate scientist in the chemistry department doing mainly synthetic chemistry and some medicinal chemistry and design,’ says Lindsay. ‘I was drawn to being part of a start-up company as I thought it would be good getting that variety after having worked for big pharma.’

Both women agree the breadth of experience offered on the programme helped them to decide on what career path was ultimately right for them. ‘When I started I was very interested in how we design compounds and the data analysis side but I hadn’t quite realised how I could get into that area, especially with the skills that I already had in my degree because I was very much lab based at that point,’ says Kathryn.

‘I think the main thing I got from the graduate scheme was that it helped me to decide what I wanted to do next,’ adds Lindsay. ‘I’m now in a job that I’m really enjoying because I’ve tried it out and tried out other areas so that was a big bonus.’

The programme seems to be most suited to graduates who want to stay in science but are unsure about the role they want. However it can also be useful for those who have a clearer idea of their future as Clare, another of the programme’s first graduates, discovered.

‘From the beginning, I knew I wanted to be a medicinal chemist,’ she says. ‘So I tailored the rotations that I wanted to do so they would complement my end goal.’ Clare had already completed both a sandwich placement and been a summer student at AstraZeneca. She selected placements that interacted a lot with medicinal chemistry and where she could gain skills that she could use back in her preferred role.

‘When you work in chemistry you have to collaborate with a wide variety of other departments,’ says Clare. ‘You have a more in depth understanding of the science your colleagues do if you’ve worked with them, and you can better understand the results they generate,’ she says. This is an aspect of the programme Lindsay also says helps her today: ‘Having had experience in different departments has helped because they all link together. It helps make you have a more rounded understanding of the whole discovery process.’

Clare stayed on at AstraZeneca once her two years were up, and now has a job as a medicinal chemist as she had originally hoped. However for those graduates currently on the programme a job at AstraZeneca afterwards is not a guarantee.

Of the 17 graduates who formed the first cohort, four are now employed by AstraZeneca. Clare was lucky that a role became available in medicinal chemistry on completing the programme. Although she had an advantage, having worked in the department before, Clare still had to apply for the job along with external candidates. Now working as a permanent employee at AstraZeneca, Clare has found that her time on the programme has provided her with other benefits too.

All of the graduates undertake three development modules on the programme, aimed at developing their soft skills. The modules take place across three of Astrazeneca’s R&D sites, and bring together the full global cohort of graduates. They focus on personal development, starting with skills aimed at helping to make the transition from academia to industry including personal effectiveness, time management and communication. The second module moves onto how to become a great scientist – focusing on areas such as stakeholder management, critical thinking and influencing. The final module focuses on what steps they want to take after the graduate programme in order to achieve the career they want.

However this type of personal development isn’t limited to the training. Clare says the rotational aspect of the programme helped to build up her contacts and to pick up new skills and knowledge quickly.

‘You work with a lot of different people, are put into situations that you’re not used to and as a result you learn so many different skills,’ she says. ‘You’re constantly moving around and consequently build up a lot of contacts. In my current role I can now connect with people that I’ve worked with in the past to discuss data or projects. It’s really useful having all those contacts.’

Those individuals that complete the programme appear to be in high demand. All of the original 17 cohort found positions after leaving, with one going onto do an MBA. And of those that undertook PhDs several felt that their extra experience helped them gain a place onto programmes that are normally quite competitive.

For Lindsay, Kathryn and Clare, going on the graduate programme seems to have been a good choice. However, as the programme’s first intake, there were inevitably some teething issues that needed to be ironed out as the programme evolved. As with many of these types of programmes graduates are not always able to get their first choice of placement for every rotation – although this often led to graduates finding themselves enjoying working in areas they otherwise might never have considered. When the programme launched it also offered graduates the chance to complete a placement abroad. Although two graduates went to America and one undertook a placement in China, this has mainly been phased out due to cost and a decision to refocus on the breadth of experience that can be offered within one country.

‘It was quite challenging the first couple of years, but the programme’s really gone from strength to strength,’ says Watkin. When the programme launched the team encountered resistance from some managers who felt that the graduates could not contribute much in just eight months. Those fears were soon quelled. ‘That noise went away within the first few months as the graduates have been contributing within about four to six weeks scientifically and that gets better with each placement,’ says Watkin.

This is shown by the overall number of different rotations that are offered on the programme. Whilst the first cohort of graduates had a limited number of placements to choose from the programme now has over 130 different rotations. ‘Demand for graduates in the business now significantly exceeds supply,’ says Watkin. ‘This has introduced an element of competition in managers who need to be offering really good placements that are really going to challenge and develop the graduates and attract them into working in the area.’

This demand is a result of the real impact the graduates have had on the organisation. As well as delivering excellent scientific research a number of them have been involved in publications or spoken and presented at external conferences, something that was never expected to result from the programme. ‘A lot of managers comment about how driven our graduates are, and how bright they are in addition to their fantastic scientific contribution,’ says Watkin who also comments on how the graduates have added to the cultural vibrancy of the site.

Following the launch of the graduate programme, which is accredited by the RSC, AstraZeneca has set up a network of early career researchers across all their sites – including graduates, industrial placement students and post docs. As well as running events such as leadership symposiums, the network also hosts social activities such as bowling or cinema nights, which has helped to build a community among early-career researchers at the company. Graduates on the programme are also offered additional support in the form of a mentor, who can offer advice on future career plans and act as a sounding board for issues they might not want to discuss with their line manager or team.

The graduate programme is a long-term strategy for AstraZeneca, who have since launched a second graduate programme, this time in its Pharmaceutical Technology & Development division. In Summer 2015, AstraZeneca Imed also announced a joint PhD programme with Cambridge University that funds nine to ten full time PhD students across chemistry, biochemistry and pharmacology. ‘It demonstrates our commitment for the science base of the UK,’ says Watkin. Alongside the company’s existing sandwich and summer placement schemes it has led to AstraZeneca significantly increasing its reputation as a graduate employer.

As a result the Imed graduate programme is very competitive, receiving well over 1000 applications for 20 positions in the latest round. And with numbers increasing year on year, it’s getting tougher and tougher to whittle down the successful candidates. However for those who do take on the challenge, say the graduates, there are benefits to be had, says Clare. ‘I’m so much more employable after the graduate programme than I was before, and not just as a chemist but for other jobs too.’

Manisha Lalloo is a science writer based in London,UK