John Goodby has discovered new forms of matter and invented new materials. Helen Carmichael speaks to him about his career 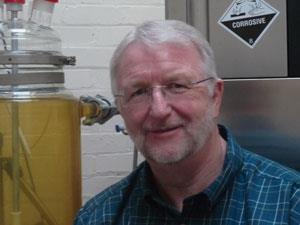 Goodby says that a wonderful schoolteacher – Mr Gunter – made chemistry seem easy and sparked his interest in the subject. At the time, he was encouraged to pick either art or medical science to study at university, but ‘I picked chemistry as a middle way,’ he says. Goodby’s liquid crystal research has enabled him to express his artistic side through cover art, exhibitions and art installations at the BA Festival of Science.

Goodby was led to liquid crystals by his wife, Ann, also a chemist. She prompted him to study for his doctorate with LCD pioneer George Gray at the University of Hull, UK. Little did Goodby realise that this would be the start of a lifelong friendship, with Gray taking the role of mentor and ‘scientific father figure’; a relationship that would launch him into exciting, uncharted areas of chemistry.

Under Gray’s ‘hands-off’ guidance, Goodby discovered new phases of matter including numerous hexatic and soft-crystal phases, resulting in an almost complete understanding of smectic (soap-like) liquid crystals. This led to new theories of matter that were used for the next 20 years, particularly those based on chiral materials. ’It was a lot of fun in those days – discovery, creation, innovation and competition were the driving forces; conversely today, innovation and creativity are expected almost on a schedule, meaning discovery can be incremental.’

Following postdoctoral studies at Hull, Goodby was invited to work at AT&T Bell Laboratories in New Jersey, US in 1979 – a hotbed of innovation. ‘Bell Labs produced around about a patent a day, consequently you were very quickly into invention,’ says Goodby. He stayed for almost a decade and his inventions contributed to the first room-temperature, bistable ferroelectric displays. And he continued to hunt out new states of matter. ‘In chemistry, this was a big era for chiral structures in liquid crystals,’ he says. ‘Trying to control the structure of chiral liquid crystals and their ensuing properties was the order of the day.’

Get excited by what you do to realise your dreams

Sensing the winds of change at Bell and aided once again by Gray, Goodby returned to Hull in 1988 to accept a readership in industrial chemistry. But just before he left, he wrote a paper on the twist grain boundary phase, which offered elegant experimental confirmation of the competition between chiral twist and layered structures, thereby producing lattices of dislocations in smectic phases, which were analogous to type II superconductors – an example of ‘a new form of matter being invented’ to confirm a theory.Nobel laureate and materials genius Pierre-Gilles de Gennes called it ‘a beautiful feat’ in his Nobel acceptance speech.

After becoming head of chemistry at Hull, Goodby moved to the University of York, where he holds the chair in materials chemistry. He is still just as excited about materials science and liquid crystals as ever. He predicts that ferroelectrics should lead to truly 3D switchable holograms ‘like Star Trek’, in the next decade or so, and that smectics could enable advertising displays that do not need electrical wiring. He is also pursuing biomedical applications: a liquid-crystal artificial bone with Smith & Nephew and notes ‘scores of clinical trials are under way’ on using ‘DNA sandwiches’ as delivery vehicles for gene therapy.

Goodby hopes to follow his mentor’s example by encouraging his students to ‘take responsibility for their research, and not to wait for my next instruction, but to innovate and create’. ‘Liquid crystals is a field where you can interact with all other disciplines, and you should take that opportunity. Keep talking to other people, and get excited by what you do to realise your dreams.’