There are over 50 male professors at the University of Botswana in Gaborone, and fewer female professors than you can count on one hand. This statistic is one that bothers analytical chemist Harriet Okatch, who has been teaching and carrying out research at the university for the past six years.

According to Okatch, family commitments mean African women – in all fields – can’t put in the overtime that would help them progress, but in the sciences, the problem is also about attitudes to women. ‘It’s because of the culture of what parents believe the girls are able to do,’ she says. ‘Then, once they’re in the field, you find the progression is the same as in other fields; whether it’s in sciences or social sciences, men progress up the ladder much, much faster than women do.’ 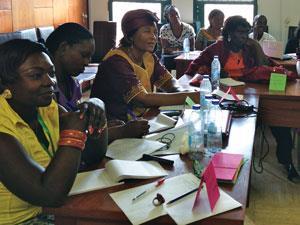 Resource problems compound the issue. Because of staff shortages, Okatch has to spend so much time teaching, or preparing to teach, that she can barely enter the lab to do the research that would help her break into the scientific arena internationally. But through a US-based organisation called Coach, operating out of the University of Oregon in Eugene, she hopes to work with a growing network of chemists across Africa to solve some of these resource problems and empower other women to progress in science careers.

Coach has already run workshops for more than 6,000 women in the US. Now its international arm, iCoach, is reaching out to developing countries. After seeing Okatch speak at a conference in Beijing in 2010, Coach board member and Oregon University chemist Geri Richmond arranged a meeting in South Africa, where they agreed to collaborate with the African Network of Analytical Chemists.

Okatch says she told Richmond that, in Africa, ‘science is really not a thing’ and Coach wouldn’t be able to focus on women scientists separately, as it had done in the past. Despite this caveat, Richmond eventually arrived in Botswana with Coach colleagues to run workshops for male and female scientists on grant writing and manuscript preparation. She is now working with Okatch on a proposal to develop cost-effective tools for monitoring drinking water quality.

‘Our goal is to develop networks between women scientists in the US and developing countries to help them advance their careers in emerging areas of science and technology,’ says Richmond. ‘Our focus is largely on water, energy and the environment, with the idea that if we can get them to move into an area of global importance that’s emerging, they don’t have to climb through the masses of people to get to the top of the career ladder as you would in an established field.’

Coach has been making steady progress elsewhere in Africa, starting chapters in Cameroon and Kenya, and running train-the-trainer workshops across North Africa. ‘When we were in Tunisia in March we ran several workshops,’ says Richmond. ‘In April, they ran the workshops again with local Tunisian women scientists, and they had over 160 women show up, standing room only, and [they are] begging for them to do more.’

In January last year, Richmond and Coach colleagues visited Kenyatta University in Nairobi, Kenya, where they gave a half-day workshop on proposal writing and publication. The team has since returned to offer support in leadership and negotiation skills. As a result, Jane Murungi – the first woman to teach chemistry at the university – has started a research collaboration with Clare Muhoro, a Coach member from Towson University near Baltimore, Maryland. Using Muhoro’s portable instruments, Murungi and her students analysed chemicals in the river Ruiru, which supplies water to local residents. ‘We are waiting for maps that will help us relate the levels of parameters measured with anthropogenic activities,’ says Murungi. ‘After establishing the levels of pollutants, we shall come up with ways of removing [them] using locally available materials.’ She hopes their results, along with Coach training, will help them obtain grants to map other rivers in the region.

The lack of instrumentation that prevented Murungi’s group from carrying out these tests themselves extends to many African chemists and chemistry students, says Richmond. Challenges range from basic instruments and services to relationships between the African nations. Back in Botswana, while Okatch struggles to get an internet connection to communicate with colleagues in the US, she is still hopeful that Coach will help connect chemists from the four corners of the African continent. ‘For some reason, within Africa, we are very hesitant to collaborate with one another,’ she says. ‘I look at my involvement with Coach as something that is going to be long-term, that will allow us to reach out on the continent to learn from and assist one another.’