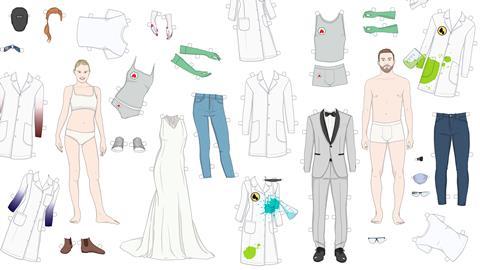 How to reinvent the lab coat

Is it time to ditch the white coats for a more modern look?

Protective clothing is, in its purest sense, as old as humans doing dangerous things. Toward the end of the 19th century, the lab coat as we know it gained prominence – and not because of scientists. Doctors used to wear black, as the colour was considered both fitting for the solemn nature of their profession, and its ability to hide dirt and stains. Thanks to the likes of Joseph Lister and his ideas about antisepsis, this went out of fashion and white became the colour of choice, appropriating the symbology of innocence, trustworthiness and cleanliness. And, practically speaking, it was – and still is – the cheapest colour available.

This has led to the lab coat becoming a potent symbol of learning. Today, the white coat imbues whoever wears one with an air of authority and knowledge in the eyes of most members of the public. This can be a powerful psychological effect, as evidenced in one 2012 paper that showed how simply wearing a white coat – and being told that it was like that of a doctor – led participants to score significantly better in cognitive tests. Yet the design of the lab coat hasn’t changed in centuries. Is this because there is perfection in simplicity, or because science has failed to move with the times? And, if we were redesigning the lab coat today, how would we do it?

‘I really believe smart textiles based on electronics will be surrounding us in our future labs,’ says Gerhard Mohr, a textiles researcher at the Joanneum Research Institute in Austria. He imagines a future where the elderly or infirm don’t get wound sores by lying on the same spot of their body, or health is improved by measuring ions in their sweat. Smart clothing incorporating electronic sensors will be with us within five years, he says, but his own work is remarkably even more simple than that.

Timothée is looking swish in a flame-retardant lab coat with sensor-equipped badge and smart safety specs. Give us a twirl, Timothée!

Mohr develops ‘smart textiles’, specifically colour-changing fabrics that could serve as warnings for a sudden change in the environment. Think of the pH paper you use for a litmus test. Now apply that to a washcloth, or a bandage. It might detect the presence of a spill in a dangerous colourless solvent, or the presence of a dangerous gas – and all with a universally understandable red or green warning code that works at all temperatures. Paired with relatively cheap opto-electric sensors – perhaps even smartphone cameras – it could give an even more accurate measurement.

Mohr isn’t alone in imagining better lab or clinical clothing. In 2017, pharma company Janssen ran a ‘Labcoat of the future’ challenge. A team from the Wyss Institute at the Massachusetts Institute of Technology, US, came up with proof-of-concept smart lab coats that can detect and respond to toxins and pathogens like Zika virus using synthetic biology. They say the tech can also be incorporated into gloves, hats, headbands, filters and respirators.

Previous technology has looked at RFID tags to limit access to certain areas of the lab, or trackable tags that can be used to trace a user’s journey around the laboratory. The latter has already been explored as a possible option for industry, creating virtual logs that can identify who accessed which station. However, research has largely strayed away from wearable electronics, such as batteries, displays and data storage, because of the inherent challenges of including them in textiles. Washing not only damages some electronics but might also leech harmful materials into a wound. And when you want to fold or iron your clothes, the inflexibility of some current electronic components is an obstacle. With smart textiles, you don’t need a battery or display and the colour stays until the situation changes (it’s also reversible). ‘This chemistry is available and widely used in varied fields – water quality control, medical analysis – what we are doing is integrating this specific chemistry into textiles,’ Mohr says.

This sounds a bit like the heat-sensitive Global Hypercolor T-shirts of the 80s, but at a more sophisticated level. The problem with that technology, Mohr says, was that it wasn’t permanent. After a few washes, the special colour changing dye itself was long gone – and with it the novelty of the T-shirt. Mohr’s group has covalently bonded a special indicator dye to the fabric, ensuring that it will endure.

One size does not fit all

Beau Wangtrakuldee, a chemist in Philadelphia, US, remembers the burn well. ‘I was following the proper dress code: covered from the neck down, closed tip shoes and a lab coat. But the methanol went through my lab coat, through my pants and burned my leg.’

The incident sparked a realisation: what a company or the institution provides to their employee does not necessarily protect them against the things they are working with.

‘If you look into lab coats in academia or industry, they’re usually made up of curtains of polyester. Yet a lot of chemists work with very potent solvents that would be able to penetrate through those fabrics – or those fabrics would get caught on fire if you had an explosive accident. And let’s not forget accidents are called that for a reason – you don’t know it’s going to happen.’

Miranda cuts a relaxed but professional figure as she wears a maternity-adapted lab coat, colour-changing gloves to indicate contaminants, and spill-resistant leggings

This, she says, is an understandable result of economics. ‘It’s cheaper for an employer to buy a lab coat that’s not made from chemical-resistant or fire-resistant material. But things happen that could cost a life. There is (better) fabric available, but the institution or company doesn’t see the injuries that occur when weighing up how much money to spend, and how spending just a little more might get a better lab coat that could protect lives.’

Her burn sparked a search for chemical and fire-resistant clothing, but what she found was few – and all designed for men. The stock lab coat is one built for a man and probably handed down across the lab for the years. It is not friendly to all shapes or sizes.

Wangtrakuldee decided to create her own: Amorsui, a supplementary ‘inner armour’ to wear under her lab coat. She now has two clothing lines, one chemical and fire resistant, another stain resistant for biochemists working with blood, urine and other biological samples. The latter have a double layer coating, both on top of and under the fabric, so the stain won’t go through and can be cleaned off without threat of the biohazard reaching the skin.

In the past decade, several women have done the same after one day too many wearing a heavy, ill-fitting lab coat. American doctor Leslie Latterman gathered a group of other female colleagues to design the Signature Lab Coat, which claims to be soft, light, wrinkle-free, stain-resistant and antibacterial. Separately, the PROcreations Maternity Lab Coat features a belt that can expand during pregnancy while the length of the coat and sleeves remains the same, avoiding a problem faced by women who have tried simply wearing a bigger coat but hit (literal) snags.

It’s easy to dismiss comfort and aesthetics but these are hugely important for both women and men. ‘Aesthetics can affect function,’ argues Wangtrakuldee. ‘Think in terms of the sleeves; fabric that won’t get in front of the thing that you’re working with. Most lab coats are usually men-sized and sleeves would have to be tailored. Pockets are really important as you’re working with different things.’

Wangtrakuldee says this can only help with health and safety compliance. ‘People want to wear something that they feel comfortable in and feel good in. If an employer is providing something that doesn’t quite fit for women it’s often too big, the sleeves are too long, it’s too bulky, it doesn’t allow you to do all the things that you need to do … it’s more likely that they won’t wear it. This could cause a lot of accidents that are or are not reported.’

Of course, the lab coat is also a last resort. ‘Protective equipment is, on one level, almost an admission of defeat,’ says Andrea Sella, a chemistry professor at University College London, UK. ‘[It means] you’ve tried all the other things to make sure that the awful thing doesn’t happen.’

Sella says we aren’t mindful enough about proper risk assessment so we focus our limited attention and money on the wrong things. He points to the organic chemist Victor Grignard, who insisted that everyone in his lab wore their wedding clothes to work ‘because that way, they’d be careful’. ‘I worry that if you focus on everybody wearing a lab coat, you overlook the fact that you’ve got over 100 litres of waste solvent that hasn’t been taken for disposal. If you have a fire – lab coat or no – you’ve got a major issue.’

One backlash about lab coats is their ubiquity. This gives opportunity for infection or dangerous chemicals to spread, particularly where protocol demands lab coats worn at all times, whether it’s appropriate for the situation or not. Is enforcement as strong around regular, safe, cleaning and maintenance?

There is also the threat of stereotyping, Sella adds. ‘A lab coat immediately leads to me being pigeonholed in a particular way. The whole Geek Chic movement is an intent to show the scientist as one of us. Yet I feel torn when I’m on stage or TV – you do stuff which is reliable and safe and the risks are low. And yet, you’re a scientist, you should really be [setting an example] wearing that lab coat … I just worry that the lab coat carries a sort of baggage and tribal visual associations that aren’t always to [science’s] benefit and we need to be mindful of that.’

The honest truth is, the lab coat is a stubborn thing. Few would argue it will never go away. And change, it seems, will be slow.

Wangtrakuldee and her peers remain in the early start-up stages of their business but unless there is a sea change in attitudes the hand-me-down lab coat is likely to remain the default lab apparel. Wearable tech has its potential, and while smart textiles are exciting, Mohr’s challenge lies in scaling up production – particularly with a textile industry where every step, from fabric-making to dying, is handled by a different company. Ultimately, unless the consumer demand is substantial, there is no driving force for change.

‘I think the lab coat is here to stay,’ concludes Sella. ‘Simply because you [can] take it off, put it on. And it is deeply symbolic, now even more so because of the branding element – you establish a tribal loyalty with your institution’s logo on it, which can be useful in helping students feel like they’re part of a family.’