Hybrid working is often touted as the best of both worlds: the social aspects of working physically alongside colleagues, plus the lifestyle benefits of working from home. But we only have one planet to live on. For people who now have a choice over how often they attend the workplace, it can be difficult to unpick how to work in the most sustainable way.

Take, for instance, the effect of hybrid working on energy used on heating. The engineering consulting firm WSP suggests, based on a study of 200 of their UK-based employees, that working from home in summer and in the office over winter is the most effective way to reduce carbon emissions. Their calculations suggest that having everyone heat their home throughout a chilly winter day produces more emissions than the combined emissions from everyone’s commute and the heating in the workplace.

But the actual impact depends on personal circumstances. If people are normally in your home all day and your employer has downsized its buildings to match the lower demand for workspace, overall emissions will be reduced – especially if you also drive to work. But other people will need to crank up the heating in an otherwise empty house, while their employers keep half-occupied offices warm. Result: an extra dose of environmental damage.

Then there’s the balance between hybrid working resulting in fewer emissions from commuting but increasing emissions from remote server use. Researchers at the MIT Energy Initiative calculate that an hour of videoconferencing can produce up to 1kg of carbon dioxide – burning a gallon of petrol produces around 8.9kg. So if you and your colleagues walk to work, it might be worth waiting until you’re in the office before having that catch-up. (Incidentally, a separate estimate by Mike Berners-Lee suggests the average email without attachments generates around 4g of carbon dioxide, adding fuel to the ‘should this meeting really have been an email?’ debate.) 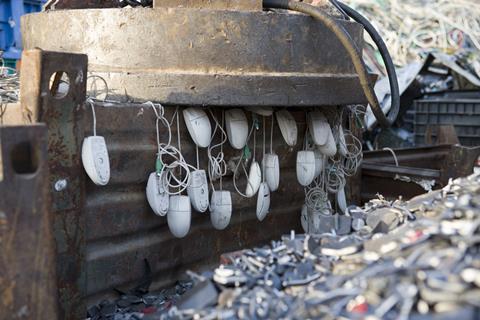 An infestation of mice at a rubbish dump

Apart from emissions, for some of us hybrid working requires lots of extra stuff, from duplicate keyboards and mice to new desks and chairs. On top of the resources consumed and pollution emitted during their manufacture and delivery, many of these items will still be present in landfill sites in hundreds of years’ time. And longer-term, lifestyle changes that emerge from hybrid working may affect people’s health, wealth and ambitions, each of which come with their own difficult-to-measure impact on the environment.

In most cases it would be too intrusive for businesses to fully quantify the environmental impact of hybrid working, as this is tightly interlinked with an individual’s personal life. However, employers can make it easier for employees to make sustainable choices. Hybrid working allows people to choose how they work best – there’s no reason why this should exclude choosing what works best for the environment.