Looking after children and your career

With the right support, a research career and childcare can be balanced – even in lockdown

Last year, Nida Rehmani was excited to attend a scientific conference in New York City – her first after the birth of her daughter. Her husband, also a scientist, looked after their 17-month-old daughter as Rehmani, who holds a PhD in biochemistry and works as a fellow at the thinktank Stem Advocacy Institute in the US, scurried from one hall to another to attend different sessions. Some of Rehmani’s excitement faded as she struggled to focus. ‘I remember hearing recurring false alarms [of the toddler screaming] from outside the hall,’ she says. These were probably the child’s giggles or mumbling, she reflects. But after every false alarm, she would check on her daughter.

Parenthood is hard for most people. A 2015 Pew Research Center survey of American parents found that more than 40% of women and 20% of men with children believed that parenthood had hampered their professional growth. However, the problem seems to be particularly acute among scientists. A 2019 study published in the Proceedings of the National Academy of Sciences found that, between 2003 and 2010, a staggering number of professionals – 43% of women and 23% of men – quit Stem jobs after having their first child.

The costs of parenthood 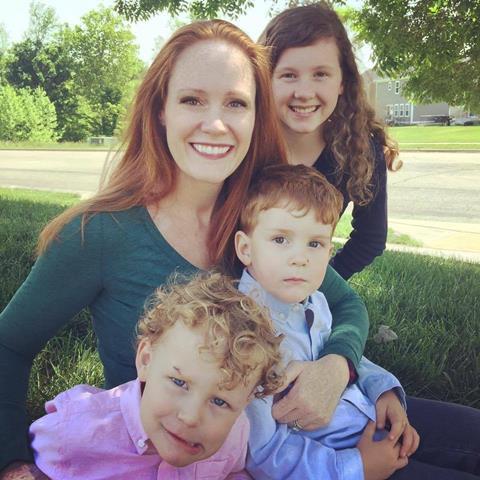 With a teenager and two five-year-olds to look after, Wendy Bohon’s productivity has fallen dramatically during lockdown

The publication output of female researchers plummets after they had their second child, according to a study published in PLOS ONE in 2019. That has been true for Emma Lane, a senior lecturer in pharmacology at Cardiff University, UK, who has two children under 10. ‘If you have a full time academic career, you have teaching and administrative responsibilities, and the research gets pushed to the spare time. Once you have children that spare time disappears,’ explains Lane. New parents may also struggle to find their former vigour at work. ‘The sheer exhaustion of having potentially been up all night with the children and knowing that you have to come in and deliver sensible teaching and be driven – that is incredibly challenging,’ says Lane.

Some anecdotal evidence – mostly from tweets by journal editors – suggests that Covid-19 lockdowns around the world may have disproportionately affected female researchers’ submission rates as they wade through new terrains of online teaching and homeschooling their own children. Wendy Bohon, a geologist and public outreach officer at Incorporated Research Institutions for Seismology in Washington DC, US, can attest to the extra challenges that lockdown brings. While she is able to do most of her work from home, the additional responsibilities of catering to the different needs of her five-year-old twin sons and teenage step daughter have compounded her difficulties. ‘I feel like I’m failing as a parent, I feel like I’m failing at my job, and my productivity is limited,’ says Bohon. Her husband is helping her with household duties, but his job structure is inflexible so that limits his domestic participation.

That’s not to say it’s only women whose careers are affected by parenthood. ‘The amount of time and intellectual effort that I am capable of putting into my job has necessarily diminished because I choose to spend time with my child,’ says James McKone, assistant professor of chemical and petroleum engineering at the University of Pittsburgh, US. ‘I now take vanishingly few late nights at work in favour of putting my daughter to bed.’

The need to spend more time at home also sees many scientist parents sacrificing travel and networking opportunities. In survey results published in JAMA Oncology in 2019, over half of female respondents – and one in three men – indicated that parenting responsibilities prevented them from attending conferences.

In 2018, 45 researchers formed a Working Group of Mothers in Science to publish a commentary piece on the difficulties faced by them in travelling to meetings. Providing financial support for child care costs and lactation rooms were among their top recommendations for conference organisers and workplaces in general. Parents may also benefit from the trend towards online conferences that has occurred due to coronavirus, allowing them to attend talks without leaving home.

Having support at work and home can help parents manage childcare and research ambitions. Computational plant biologist Anna Matuszyńska’s publication output hasn’t suffered despite two children. For Matuszyńska, who works at Heinrich-Heine University Dusseldorf in Germany, the support from her partner has been critical. ‘At the end of the day it will be them you come back to and with whom you share the workload,’ she says. ‘No university support programme can fix what doesn’t work at home.’

As a single parent, Chandrima Home, an ecologist who works as a grants adviser with the Wellcome Trust/DBT India Alliance, builds support networks on the go. While doing field work on domestic dogs in a village in Lahaul and Spiti in northern India, Home developed a close acquaintance with the villagers and found among them a dedicated person who looked after her daughter while she was out in the field. ‘He learnt everything (like changing diapers) and really looked after my daughter like his own,’ says Home. 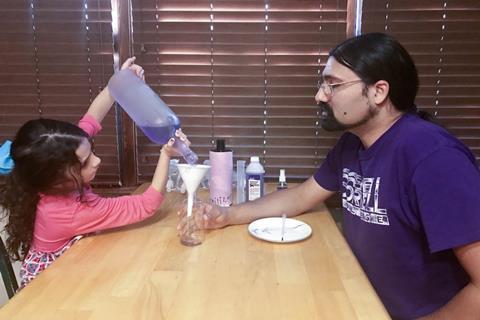 Jai Shanata, an associate professor of chemistry at Cornell College, in Mount Vernon, Iowa, US, says it’s important to choose a campus that fits your needs. Shanata and his wife, a faculty member at the same college, chose a small town because they wanted to avoid a long commute. The decision also has allowed them to integrate their six-year-old daughter into their work life seamlessly. One February weekend ‘we each had office hours, I brought my daughter in on Saturday, she brought her in on Sunday,’ says Shanata. ‘That meant the other person could focus on their work [that day].’

Shanata and his wife have been sharing childcare responsibilities during the pandemic lockdown. From mid-April to mid-May, Shanata had fewer teaching responsibilities than his wife, so he took it upon himself to provide practical science lessons to their daughter, helping her make a hand sanitiser and teaching her the chemistry behind it. She has found isolation particularly hard, so she’s also been writing letters to all of his wife’s students. But parenting in lockdown is much more challenging than normal, Shanata says, ‘in part because I have no expertise or training or background in teaching first graders. I teach college students.’

Sometimes, you have to be willing to ask for certain rights and privileges at work. When Bohon’s twins were babies, she often had to pump several times a day to adequately feed them. The lactation room wasn’t particularly close to her office, so she had to negotiate with the building manager to provide her with a small private space for expressing milk. ‘It wasn’t that he was hostile to it, he just had never been confronted with it,’ says Bohon, who was a postdoc at the time.

Parental leave is also important for making pregnancy and the post-birth period stress-free for parents. Matuszyńska took a one-year maternity leave after her first son’s birth and an eight-month-long leave after her second – getting paid 65% of her net average salary, in line with German standards. But parental leave laws vary across the globe – in the US there is no mandatory period of paid leave, though some states and institutes have their own parental leave entitlements – leaving many parents to negotiate with their employers for the time off they need. Bohon recommends that scientists who find themselves in this position reach out to people in similar situations and advocacy organisations such as 500 Women Scientists, of which she is a member. ‘If you’re denied maternity leave … we can start to ask that institution questions that an individual scientist can’t ask,’ says Bohon.

Bohon also encourages parents to take a cue from the Working Mothers in Science Group and publish their demands in journals. ‘Scientific societies are made of scientists, and scientists respond to journal articles, citations and evidence-based claims,’ says Bohon. ‘So when you have a group that organises, compiles evidence and puts forward articles in ways that are recognised, understood and respected by their communities, I think it has more traction.’

Not everyone returns to full-time academic work after starting a family. For Bohon, the decision to switch to a career in science communication was partly influenced by children. ‘I didn’t have the mobility that a lot of people have, because I had three kids and a partner,’ recalls Bohon. ‘I wanted to be close to my family and my husband’s family so that we could have some family support. It offered a better balance to be in science communication,’ she says.

For materials scientist Melanie MacGregor, a temporary switch to part-time work in 2013 helped her continue her postdoc while raising two children under the age of three. ‘I worked part time for just under a year, and this helped with juggling the mummy and researcher responsibilities, primarily by lifting off some of the guilt one may face when leaving early to attend doctors appointments, baby gym and so on,’ says MacGregor, now a senior research fellow at the Future Industries Institute, University of South Australia.

McKone says that scientist parents have to develop their own picture of what happiness and success look like. The research community, he says, tends to reward professionals based on numbers – the number of papers you publish, the number of grants you bring in, and the number of students you mentor. ‘That is pretty disadvantageous to parents because faculty members without children are almost always going to be able to put up bigger numbers, simply because they can spend more time doing the job,’ says McKone. ‘You have to be your own authority with respect to how much is enough, because the broader community is always going to be telling you more.’

Luckily for McKone, his employer is extremely supportive of scientists with families – not only did he get four weeks of paid parental leave, the university also extended his tenure evaluation period from five to six years.

‘I’m a much happier person doing less research and having this child that I love than I would be if I didn’t have this child and I was doing more research,’ he says.