This year’s Nobel prize in chemistry – awarded to Brian Kobilka and Robert Lefkowitz for their work on GPCRs (G protein-coupled receptors) – recognised the importance of GPCRs in developing our understanding of cell signalling. The ubiquity of these receptor proteins, and the multitude of processes they control, has also brought them recognition from those in the drug discovery business: more than a quarter of all marketed drugs act at a GPCR. But rational drug design has been severely hampered by a lack of structural information. This is now starting to change.

Start-up company Heptares Therapeutics focuses exclusively on GPCRs. The company was spun out of the Medical Research Council’s Laboratory of Molecular Biology in Cambridge, UK, in 2007, based on the science of Chris Tate and Richard Henderson. Since then, it has brought several drug candidates into preclinical development.

As chief scientific officer Fiona Marshall explains, Tate and Henderson discovered a way to engineer increased thermal stability into GPCRs by introducing mutations. ‘Prior to this, all the work on GPCR drug discovery was done with the receptors still in cells,’ she says, which makes it difficult or impossible to apply many of the standard techniques and methods normally used on soluble targets. Heptares’ modified GPCRs remove that limitation, says head of chemistry Miles Congreve: ‘Once the GPCRs have been stabilised, they become easier to handle and can be used for biophysics experiments and protein crystallography.’ 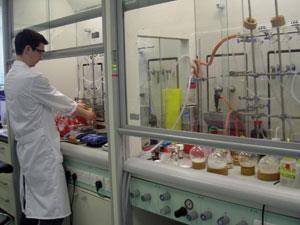 Many GPCRs in different families can be stabilised in this way, but rather than becoming a technology service company, Heptares was always determined to discover drugs. Early success in the first project, to discover an adenosine A2A receptor antagonist, led to a larger fund-raising round in 2009, enabling the company to grow from 8 to 30 employees, and to move into its current facility on the Welwyn Garden City Biopark.

This saw several new internal drug discovery projects begin, and further projects were added in partnership with pharmaceutical companies, notably Takeda and AstraZeneca. The company now has 60 employees. ‘Almost all are bench scientists, with about half working on protein engineering to purify the GPCRs and obtain x-ray structures,’ Marshall says. ‘The other half is the real drug discovery “engine” – medicinal and computational chemistry, plus pharmacology.’

With the structural and biophysical data from their stabilised receptors, the discovery team use fragment screening and virtual screening to find hits, says Congreve. ‘We have an array of about 5000 fragments, which we screen using direct binding methods, and then elaborate and optimise them into potential drug molecules. Because GPCRs are a family, it’s possible to learn how ligands are binding in [one GPCR], and apply that knowledge to another.’

As they learn more about the target, they use the principles of multiparameter optimisation to make atom-efficient lead molecules. The in vivo models and pharmacokinetic studies are then outsourced to ultimately deliver a candidate drug. The medicinal chemistry team now numbers 12, with a similar-sized group of external scientists. ‘We work with Oxygen Healthcare (now Piramal) in India, plus Sygnature in Nottingham, and other companies on a bespoke basis,’ Congreve says.

Senior scientist Steve Andrews explains that as they run matrix teams, he’s a lead chemist on three different projects, including one of the alliances. ‘Day-to-day, I’m in the lab making new molecules, but I’m also involved in the management of outsourced chemistry,’ he says.

All the chemists are well versed in structure-based design, using modelling and a 3D projection suite to study the binding sites. ‘We go through iterations using our structure–activity information,’ Andrews explains. ‘Most of the chemists are involved in that, and I also spend a lot of time designing the molecules and their synthetic routes, as well as doing lab chemistry.’

For the company’s first project, they partnered with Shire at the preclinical stage, but in future the plan is to take programmes through to the clinic in-house, and then bring in partners for the expensive late-stage trials. Recently, a development team has been set up to take Heptares’ muscarinic M1 programme (a GPCR involved in the central nervous system) into clinical trials for treating Alzheimer’s disease.

The company is also looking at biotherapeutics. ‘Some diseases where GPCRs are involved are well suited to antibody therapeutics, particularly cancer and some inflammatory diseases,’ Marshall says. ‘We have generated proof-of-concept data, and have a collaboration with MedImmune on antibodies at GPCRs.’

So far, everything has gone according to plan, Marshall claims. ‘If you go back and look at what we told the investors at the start of the company – getting structures, using them for drug design and making breakthroughs in difficult targets, we’ve achieved that. We’re very optimistic about the future.