Overcoming severe injuries in a lab accident in 2016, she has returned to science in a leadership role and is about to become a mum 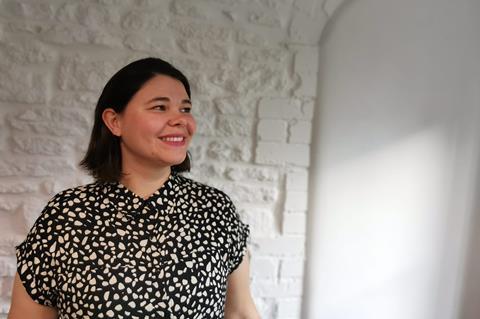 Six years after a horrific lab accident in which Thea Ekins-Coward lost an arm, she has moved forward and is thriving. While her lawsuit against the University of Hawaii at Mānoa and her supervisor remains pending, Ekins-Coward is now the chief scientific officer of Industrial Phycology (I-Phyc) – a water treatment supplier in Bristol, UK – and is pregnant with her first child.

The youngest of four children, Ekins-Coward grew up on the Isle of Wight, off the UK’s south coast. The summers there were glorious, she recalls, with lots of time at the beach, on bikes, and fossil hunting. Dyslexia made some aspects of school challenging, and she was always creative – making art and going with her mother to see art exhibits.

‘Throughout my A levels I hedged my bets, taking a mixture of creative and scientific subjects,’ she recounts. ‘It wasn’t until I was 18 and really had to decide a direction for university that I decided to study marine biology due to my affinity for the sea.’

Ekins-Coward believes that her dyslexia and creative background has helped her scientific career, having long ago forced her to acquire the skills of patience and problem-solving that are key for a researcher.

When she graduated from Newcastle University, UK, with a degree in marine biology in 2008, the field of algal research was gaining a lot of traction. ExxonMobil soon invested $300 million (£227 million) in biotechnology research to help develop biofuels made from algae. Ekins-Coward decided to stay at Newcastle to pursue an interdisciplinary PhD, which led her to take several diverse postdoc posts in bio-remediation and process intensification of the UK water industry. This research involved using new technologies for carbon capture, investigating aquaculture waste as a bio-coal feedstock and producing high-value products from marine resources.

Change in an instant

‘An academic career is as much about tenaciousness as it is about skill,’ she says. ‘Many of my postdocs were short-term, intense projects requiring deliverables to be completed in mere months, due to the funding available.’

It was around 2010 when she met her wife, Amy, who was an undergraduate at Northumbria University at that time. They got married in 2014 at Whitley Bay Lighthouse, surrounded by seals, and were the first same-sex couple to be featured in a UK wedding magazine.

‘We thought we were going to have a civil partnership, and then during that year the law changed that we could legally be married,’ she recalls. ‘So, we were one of the first same-sex couples to actually have a legal marriage.’

They moved to Hawaii in 2015 for Ekins-Coward’s visiting postdoc at the University of Hawaii at Mānoa. ‘We were able to make friends quickly and I used to go surfing and hiking with people I had met on Meet-up, while Amy volunteered with the charity Hawaii Literacy,’ she recounts.

But everything was ruined the next year by a lab explosion that occurred when she was transferring hydrogen, oxygen and carbon dioxide into a low-pressure gas tank to make a growth medium for cells. The blast resulted in the amputation of her dominant right arm, among other injuries.

‘If there is one thing the last six years has taught me, it’s that life can change in an instant,’ Ekins-Coward tells Chemistry World. ‘Being an academic is as much an identity as it is a career; we don’t get paid much and we spend many long hours working due to our commitment – I felt like I had lost everything at 29 after being so independent.’ She had an identity crisis. Feeling devastated and lost, she and Amy moved back in with her parents on the Isle of Wight. She spent a long time relearning some basic tasks, like dressing herself and writing.

Returning but burning out

Eventually the couple moved back to north-east England, where they had a lot of friends and work contacts. Ekins-Coward took temporary work on receptions, and some short-term roles doing administrative tasks.

In 2018, she re-entered academia. Newcastle University was a natural choice, because a return to the lab had to be in an environment she knew, with people she trusted. Johanna Gascoyne Owens, who heads up research funding development at the university, helped get her some money through Newcastle’s equality, diversity and inclusion (EDI) programme. This meant that Ekins-Coward could access the university library, talk to supervisors, and get help writing scholarship funding applications.

From there, she procured a very short-term postdoc working on a desk-based study, and then began a collaborative postdoc between Newcastle University and North Carolina State University, US in early 2018. She and Amy even moved to North Carolina for a month.

‘I was working very hard during the week developing a method for creating algal biocomposites,’ she says. ‘It was a large task to take on, learning how to adapt to a lab environment, working internationally, and on a short-term high-demand project.’ By the end of the project, she was completely burnt out and very ill.

Deciding that it would be best to leave academia and science altogether, Ekins-Coward began working as an administrative assistant again while figuring out what to do next. She considered becoming a coffee roasting expert, a distiller and a food innovator. Because she planned to leave science, she initially balked when a professional acquaintance, Dan Murray, contacted her out of the blue to ask her join the science team at I-Phyc, the company he founded that treats wastewater with micro algae.

An offer you can’t refuse

‘I refused him many times – I had experienced so much stress and been through so much trauma, I honestly could not see myself returning to the field,’ she says. But the more they talked, the more excited Ekins-Coward became about I-Phyc, which has developed a process that exploits the ability of microalgae to quickly scavenge large amounts of phosphate from wastewater. She started there as a senior scientist in 2019 and progressed to chief scientific officer the following year, after establishing several critical methodologies for the company. Ekins-Coward is currently the only woman there in a senior leadership role.

While she can’t share anything about the terrible incident at the University of Hawaii because her lawsuit is ongoing, various investigations revealed equipment design and safety failures, as well as serious lab safety deficiencies at the university. Ekins-Coward says the incident turned her from an adventurous, fun loving, exuberant person into a shell. She still struggles with phantom pain, chronic pain and PTSD. ‘Nothing is more important than lab safety,’ she says.

As a disabled person, Ekins-Coward feels like she has constantly had to be a pioneer – both in the lab and as she handles impending motherhood. She hasn’t had much luck finding guidance for people who have suffered strokes, limb loss or have adaptive needs and want to prepare to become parents. She’s trying to figure out if she should write to an MP, rally a petition, or take other action to get the standards or support that she needs.

But her biggest message is that you can prevail, be persistent, and carve your own path, even past significant obstacles. ‘It doesn’t make it easy, and it doesn’t make it right, but you can still be successful.’