Many students struggle to learn and use scientific terminology. But until recently, deaf students who use sign language have not had the words for even a basic scientific discussion. Thankfully, this is changing with initiatives such as the Scottish Sensory Centre’s British Sign Language (BSL) Glossary Project, which has introduced over 1000 scientific terms into sign language.

Each entry provides a BSL sign for a maths or science term. The glossary is unique in that it also has video clips of definitions and lab movies in BSL, which are accompanied by English translations. The project is aimed at deaf school students who use BSL and want to learn scientific signs, as well as teachers, communication support workers, interpreters and parents.

The project’s organisers are the University of Edinburgh’s Audrey Cameron – a trailblazing chemistry teacher who was the first deaf person in Scotland to obtain a PhD – Gary Quinn, a deaf linguist from Herriot Watt University and Rachel O’Neill, a lecturer in deaf education at Moray House School of Education. Since 2007, they have worked with a group of 16 deaf scientists and sign linguists, collecting and developing new signs for the glossary project. 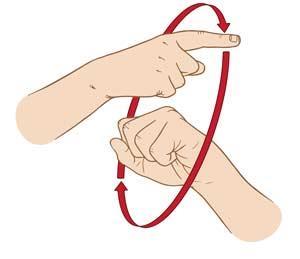 This either means finding a word that already exists (as was the case for ‘nocturnal’ and ‘tension’) or using information about a concept together with the principles of BSL to generate new terms (like ‘enzyme’ and ‘exothermic’). Sometimes signs are modified after they have been tried out on a wider group of BSL users.

According to Cameron, the impetus for the new scientific terms was the Scottish Qualification Authority’s decision in 2004 to offer exams in BSL for deaf students, allowing questions to be both asked and answered using signs. ‘However, most students, teachers or interpreters do not know a lot of the signs for scientific terms,’ Cameron says.

But the project is designed to do much more than merely coin new words, says Quinn. ‘The difference … is that we have definitions, which are very helpful for pupils’ understanding.’ He explains that this is the project’s principal objective – creating a cognitive tool to support learning and to overcome some of the barriers deaf students face in the classroom (see box). ‘The main aim of our project is to put the scientific concept over to the child,’ he says, ‘not just to allocate a sign.’

For example, while a student could communicate using initialised signs – simply spelling out a word – this is less helpful, says Cameron, because it doesn’t show the concept of the term visually. Examples of the team’s developments in this area include terms like atom, electron, proton and nucleus.

‘We’ve seen people using the letter “e” and circulating round to represent exothermic and endothermic reactions, but these look the same,’ Cameron continues. Instead, the team developed exo- and endo- signs that show the heat loss and heat gain visually. 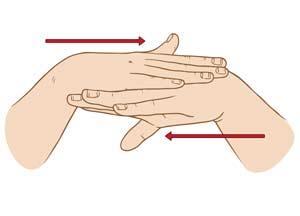 Fingerspelling is still the only option for specific chemical names, but families such as alkane, alkene and so on do have unique signs.

Cameron adds that all the terms in each family of signs (for example, chemical reaction, physical change, non-reversible, catalyst, reactant) share a common base sign, which helps the learner to understand the concepts. ‘We know that the signs are accepted when we see deaf people using them at school or work.’

BSL was recognised as a minority language by the UK Government in 2003, and is used by around 120,000 people in the UK, according to the British Deaf Association. It has its own grammar and syntax, which are not strongly related to spoken English. ‘The BSL glossary has focused on STEM [science, technology, engineering and mathematics] subjects because we recognised that deaf BSL users sometimes had the signs, but they were not being used by teachers or support workers because of the lack of contact between the deaf community and school staff. We also recognised that BSL had not been used in educational contexts since before compulsory schooling began in the UK, so the language often did not have the technical terms associated with science and maths,’ says O’Neill.  The need to develop technical terms is an issue shared with other minority languages in the UK such as Gaelic and Welsh.

‘We would like to see staff fluent in BSL working with signing deaf children, and parents having access to the glossary in BSL and English so that they can help their children with homework,’ O’Neill continues. 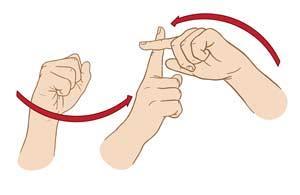 Globally, there is no common ‘international’ sign language, and versions used by different countries also face the same lack of science-related signs. US universities, for example, are developing scientific sign language terms for American Sign Language. Cameron and Quinn have taken their project on the road to publicise the project and encourage scientific sign language development beyond Scotland. Aimed at deaf young people, they have visited locations around the UK, and as far afield as Rio de Janeiro in Brazil.

So far the project has focused on school students, and the team admits that more terminology will need to be developed to cater to scientists at advanced stages in their careers: ‘As a deaf scientist, I worked with interpreters at presentations,’ Cameron says. ‘This was difficult because the interpreters had to understand the science before they could interpret, and at postdoc level that was way beyond what technical vocabulary exists in BSL.’ However, she also offers role models such as Mark Fox, a deaf chemist at the University of Durham, UK, who ‘produces hundreds of papers’ with his team in highly technical English.

For deaf children who make it through to university at the appropriate time with their age group, employment prospects are very good and similar to the wider hearing population. However, this group is much smaller than the proportion of hearing children who go straight on to university. ‘We have recent research evidence to show that these university students often have other socio-economic advantages and confidence from their family to support them through difficulties. So more deaf students than expected go into further education or training,’ says O’Neill.1 The prospects for this group are bright, but there is still a long way to go to offer a truly inclusive work and learning environment: many deaf young people are unaware of the UK government’s Access to Work scheme for example, which could provide equipment, BSL interpreters or note-takers for meetings at no cost to the employer. ‘For those in training programmes, there is very little understanding from employers about the issues deaf employees face,’ O’Neill says. 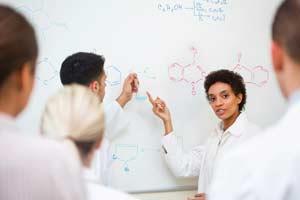 Following group discussions can be ‘a nightmare’

Delayed language abilities, and as a result general knowledge, are common for those who have been deaf from an early age. Deaf children often have a very restricted technical vocabulary and extremely delayed reading levels because their early development focuses on learning to speak, rather than on learning to sign from others fluent in sign language.

According to Rachel O’Neill, deaf students enjoy lab work: ‘It is visual and there are clear procedures.’ However, there are many challenges: poor acoustics in labs, difficulties with participating fully in group work and support staff (for interpreting or note-taking) who may not be confident with scientific concepts. ‘Classroom discussions are particularly difficult for deaf learners,’ O’Neill continues, as lip reading in a group with no visual clue as to who is speaking is ‘a nightmare’.

Finally, a great deal of modern learning relies on pupils’ ability to search the internet independently. ‘Knowing what terms to put into a search engine depends a great deal on general knowledge and on deep knowledge of word meaning, both of which are difficult for many deaf pupils,’ O’Neill says.

For those learning in a school with particularly good resources, deaf children often have high expectations for STEM subjects, sometimes supported by a science or maths specialist who is a teacher of deaf children. ‘Deaf pupils who go through these schools receiving good quality in-class support often do very well in further and higher education.’

1. Mariela Fordyce et al, Post-school transitions of people who are deaf or hard of hearing, The University of Edinburgh, 2013