Julian Braybrook has a suspicion that many people are unaware of the role of UK government chemist. As the new man in the job, he is determined to change that. 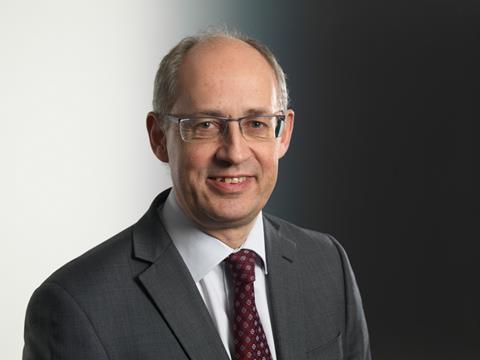 ‘There is an opportunity to really get out there and make the role of government chemist more readily understood and to build its advisory component,’ he says. Braybrook took up the position on 1 June 2018, while also continuing his day job as director of measurement science, health science and innovation for the national metrology laboratory at LGC, the Laboratory of the Government Chemist, which was privatised in 1996.

Braybrook has already been asked to provide official advice on food matters. He is now bracing himself for Brexit. ‘Do we know what the government chemist function will look like post-Brexit? The answer is no, not yet.’ But he has a gut feeling that his role could expand to become more international rather than Europe-focused. ‘It could potentially lead to a lot more work for the government chemist,’ he suggests.

Braybrook is the 15th government chemist since the role was created in 1909 to ensure that LGC could work independently of the Inland Revenue and the Board of Customs and Excise. Today, the role is appointed by the Department for Business, Energy and Industrial Strategy (BEIS). As a referee analyst, he or she resolves disputes over analytical measurements – mainly in food and feed cases – backed by LGC’s dedicated team of analytical scientists. The role also involves promoting analytical science and technology and advising the government on policy, standards and regulation.

The government chemist typically sees around 10–20 referee cases per year, with a view to resolving issues away from court. A common case involves aflatoxins, poisonous chemicals produced by certain moulds which are sometimes found in nuts and seeds. ‘There is a big sampling issue, but assuming you can get the sampling right, then the analysis is really quite straightforward,’ Braybrook explains.

The advisory part of the job is ‘much broader and more about where chemical analysis is potentially going to be used for regulation or standardisation purposes,’ he says. ‘It’s really to make sure regulation is as sound as possible … it’s like being a chemical measurement champion.”

Braybrook is particularly keen to expand the government chemist’s advisory function. For example, he would like to boost support for a broader range of government policies and to respond to more consultations in relevant areas. ‘Although I am an analytical chemist, I have done quite a lot of work where chemistry interacts with biology. I can bring a different element to that advisory role and a different set of partners and parties, which should help the government.’

One of his first tasks as government chemist was to provide advice to the UK Food Standards Agency on a proposed amendment to regulations dealing with food contact materials. If passed, this would have seen a 90% reduction in the permitted migration limits for bisphenol A (BPA). Braybrook advised that industry may face costs when complying with the new limit because of a need to validate methods with these lower detection limits.

The road to the laboratory

Braybrook studied chemistry at the University of London, UK, before completing his PhD at the University of Cambridge, where he worked on contrast agents to highlight the gut during imaging. ‘I had to use chemistry to get the magnetic material though the stomach, with its low pH. One way was to coat it and when it hit the pH of the gut, the coating fell off and exposed the magnetic material which would give you the contrast for imaging purposes.’

Together with the other researchers, Braybrook would run evening experiments, taking it in turns to work overnight. ‘At the time, it was so exciting,’ he recalls. ‘It was relatively new to embed that into a clinical environment. While we were there the first whole body scanner went into Addenbrooke’s [hospital]. It was a really interesting time.’

After his PhD, Braybrook came across a job advert for LGC. When he arrived for interview, he discovered that the other candidates were out-and-out materials scientists and began to doubt whether he would get the job. However, his experience of applying research to clinical situations stood him in good stead. By the early 1990s, Braybrook had become a business manager at LGC, which involved establishing relationships with EU officials and organisations in the private and public sector. Later, moving into consumer safety, he chaired UK and European chemical standards committees for childcare articles and became an expert for chemical matters for European mechanical standards committees.

The government chemist term is fixed at five years, with the possibility to renew for a second term. Braybrook is still working out the ‘precise mark’ he wants to leave, although he is certain that he wants to make people aware of what the role entails – and how they could benefit from closer interaction with his team. ‘The role is better known within government, but there is still room for improvement. I have a team behind me that can span quite a lot of technology areas – so if you’re looking for advice on something, you could well use the government chemist.’