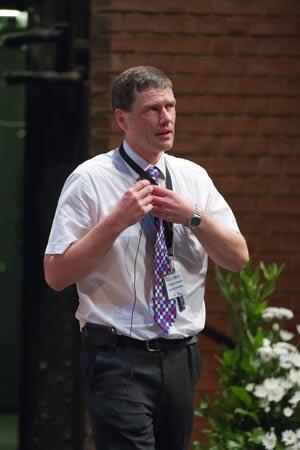 This autumn, Stephen Ashworth’s career will come full circle. His fascination with the Royal Institution Christmas lectures as a child kick-started his interest in science communication, which has taken him - and a car boot full of demonstration equipment - around the UK and on an 11,000km tour of South Africa. In October, Ashworth will give his popular ‘kitchen chemistry’ show at the Royal Institution for the first time. ‘I’m really excited about that,’ he says.

Ashworth is currently a reader at the University of East Anglia in Norwich, UK, where he spends about a tenth of his working time on science communication activities. The rest is spent teaching undergraduates and carrying out various university administration tasks. Ashworth, however, hasn’t entirely turned his back on his research interest: high resolution laser spectroscopy. ‘I help other people with their research, doing calculations and analysing data,’ he says. Laser spectroscopy first caught Ashworth’s eye as an undergraduate at the University of Oxford, UK. He then stayed at Oxford for a DPhil.

Next, he followed the well-trodden path of young UK researchers and completed a postdoc in the US, at the Joint Institute for Laboratory Astrophysics and National Institute for Standards and Technology both in Boulder, Colorado. This was followed by three years at the Max Born Institute for Nonlinear Optics and Ultrashort Pulse Spectroscopy in Berlin, Germany. Ashworth then returned to the UK to take up an Engineering and Physical Sciences Research Council (EPSRC) research fellowship at the University of Bristol.

It was during his time at Bristol that Ashworth started to dip his toe into science communication. First, he attended an EPSRC funded two-day workshop in Cardiff on communicating science to other audiences. Then, a few months later, he was awarded one of the first EPSRC public engagement grants. This allowed Ashworth to put together three demonstration lectures related to his research field. ‘I had just put everything together for the first lecture when I moved here to UEA,’ he says. Next, Ashworth needed an audience. He decided to plug himself into a network that already had regular speaker-based meetings: the Women’s Institute, better known as the WI. What he hadn’t reckoned on was having to do an audition. ‘All their speakers go through an audition process,’ he explains.

Passing his audition with flying colours, Ashworth’s first gig was to replace a speaker scheduled to give a talk on hats who was unwell. ‘Someone came up to me at the end and said: “much better than hats”,’ jokes Ashworth. After this glowing start, Ashworth found himself becoming more and more in demand for his science communication skills. ‘It sort of snowballed,’ he explains. Soon school children were treated to his shows.

And, as so often is the case, serendipity played a role. In 2007, during a meeting with a South African research collaborator, Ashworth happened to mention his science communication sideline. This led in March 2008 to him giving chemistry demonstrations at Scifest Africa, an annual, weeklong national science festival held in Grahamstown, South Africa. Ashworth has been back nearly every year since and is now on the Scifest Africa advisory committee.

It was through his partnership with Scifest Africa that the kitchen chemistry concept was born in 2011. The idea is to use materials that are often found in the home, or are easily obtained from most supermarkets, pharmacies or hardware stores. ‘In South Africa there’s a real demand for this sort of thing,’ he explains.

In 2013, Ashworth spent three months driving around South Africa giving his kitchen chemistry show, a handful of other demonstrations and workshops for teachers. ‘I spent 100 days there, drove 11,000km, did more than 120 events and spoke to just over 10,000 people.’ It was a definite highlight of my career so far, he adds.

Since then, Ashworth has found an even more efficient way of reaching out to large numbers of people - through massive open online courses (Moocs). In 2014, he ran his first Mooc that followed his Kitchen chemistry ethos: 9000 people signed up and over 1200 completed the majority of the course (less than 10% of people typically complete a Mooc). He also writes a column describing chemistry experiments that can be done in the home for The Mole, a bimonthly RSC publication aimed at students.

Ashworth also helps shape the wider science communication landscape within the UK as a member of the RSC’s outreach working group. This committee offers advice on anything the RSC’s outreach team is involved with, from awarding grants, to competitions, to providing resources and practical support for science communicators. He performs a similar role at the Institute of Physics, and also oversees the chemistry events at the British Science Festival each year in his role as recorder for the British Science Association’s chemistry section.

‘My science communication work started off very focused and then it’s broadened out,’ he explains. ‘I have a dining room at home stuffed full of boxes with equipment in that I take out to do my range of different shows.’