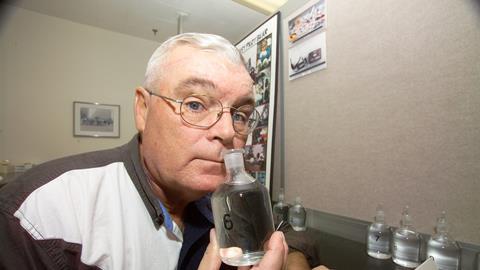 Nasa has a volunteer panel of 25 people whose job is to smell items before they are sent into space. The mainstay of this group is George Aldrich. After 45 years on the panel, Aldrich’s nostrils have completed more than 900 odour tests for the agency (his closest rival has only reached the 600s). It’s a role that’s earned him nicknames ranging from ‘Nasa’s Chief Sniffer’ to ‘Nostrildamus’.

Aldrich is not a chemist and never attended university – he joined Nasa’s White Sands Test Facility in New Mexico in 1973, straight after graduating from high school. ‘My dad worked out here, and he called me and said they were looking for five temporary hires,’ Aldrich recalls. He immediately quit his job to take one of these provisional posts, before becoming a fireman guard for the site. It was his fire chief, who belonged to Nasa’s first odour panel, that got Aldrich into the smelling business at the tender age of 18. ‘He told me about it, since I was young and healthy, and said it was a great thing to do for the astronauts,’ Aldrich adds.

In space, you can’t just open a window

The idea saw Aldrich move to Nasa’s molecular desorption and analysis lab at White Sands, which assesses potentially hazardous materials, components and systems. As astronauts are in a ‘closed loop’ environment where air is recirculated, the delicately-balanced environment could be upset by a smell that is toxic or overwhelming: in space, you can’t just open a window. In the 1970s, the Russians had to abort a space mission shortly after lift-off because of a bad odour inside the space capsule; Nasa doesn’t take any chances.

Nasa uses humans to do this odour testing – as opposed to relying on dogs or so-called ‘electronic noses’ – because they are the best predictor of how something will impact an astronaut. ‘If you subject [dogs] to an odour, they are not going to be able to tell you what it smells like,’ Aldrich says. And while electronic noses can identify specified chemicals, they can’t report something leaving a bad aftertaste in the back of their throats, or blistering the inside of their noses, he adds.

If you subject [dogs] to an odour, they are not going to be able to tell you what it smells like

To prepare for odour testing, Nasa places the material that it intends to launch in a glass desiccator and heats it to around 49°C for 72 hours, then lets it cool. Next, the agency selects five people from its odour panel to smell the samples. First, a nurse inspects their noses and throats to ensure that they don’t have a pre-existing condition that could cause them harm or affect the test, like a raw throat or bloody nose. Then the sniffing begins. 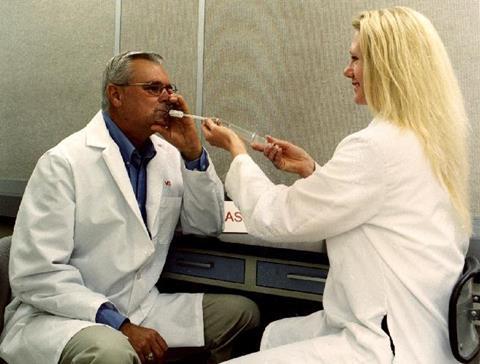 George Aldrich has participated in more than 900 odour tests

‘We just come in, one at a time, and we are subjected to the gas of that material three times,’ Aldrich says. Each of the panel members then rates the smell on a scale of zero (undetectable) to four (revolting). Any material that scores over 2.5 fails the odour test. ‘We report back to the customer that it is slightly over the threshold for odour, but if it is very important for that object to fly, it might fly anyway. Or, they might try flying something else that might be less toxic.’

Once these odour tests are completed, the nurse returns three hours later to recheck the participants’ noses and throats to determine whether the material caused adverse effects.

All of this volunteer work is separate from Aldrich’s official role, which is to conduct toxicity testing on objects before they go into space. Almost everything is checked, down to the toxicity of shaving creams and gels used by the astronauts.

Aldrich’s team uses a flame ionisation detector to calculate analytes in the gas stream, and then shoot the gasses through another gas chromatograph that has a mass-selective detector. This breaks the chemicals apart to produce a spectra that can help identify and quantify the chemicals present – important because of Nasa restrictions. For example, the agency prohibits anything from launching into space that contains more than 20ppm of carbon monoxide, or more than 5000ppm of carbon dioxide.

Once they have a problem up there with odour, I think they might change their mind…

Each item is then assigned a toxicity – and, once again, it will not fly if that number is too high. Aldrich often sees the items again: if they pass, they go on to face the odour panel.

Aldrich remembers that his nose was a lot busier in the days when Nasa was still flying its space shuttle fleet, during which Aldrich averaged almost three odour tests per month. Once, he felt he was likely to break 1000 odour tests. Now, with Aldrich only participating in eight to ten odour tests a year, it feels like an elusive goal.

‘The requirements have just changed a little,’ he says. However, even nearing retirement, Aldrich insists his olfactory abilities will remain on standby in case the panel’s workload picks up again. ‘Once they have a problem up there with odour,’ he adds, ‘I think they might change their mind.’