Sending her experimental polymers into space was a career high for Lenore Rasmussen. But space is just one part of the story, Nina Notman finds 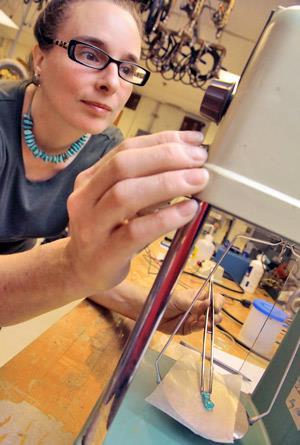 This summer, electroactive polymers designed by US entrepreneur Lenore Rasmussen are spending three months on board the International Space Station (ISS) to test their radiation resistance. Rasmussen has been working on them for 12 years in the hope of one day improving prosthetics and robotics. If they pass this latest test, they could also find application in space and during nuclear disasters.

Rasmussen grew up on a farm dreaming of becoming a vet, but during her undergraduate degree scientific research stole her away. A year into a biology PhD, a family catastrophe triggered another change in career direction. ‘A cousin who remained on the farm had a very bad farming accident,’ she explains. Concerns that his leg might be amputated led her to examine available prosthetics. ‘I didn’t like what I saw for the leg, but I really was disappointed with what I saw for the hand. They were either mannequin-type hands or very functional metallic ones,’ she says. ‘I felt we could do better than that.’

A move to chemistry

Rasmussen wrote up her biological work for a master’s degree and moved onto a polymer chemistry PhD programme at Virginia Tech. In 1992, her husband’s job caused the family to relocate and again she walked away with a master’s degree. Three years teaching at a community college was followed by two years of polymer research at Johnson & Johnson. Rasmussen then returned to her PhD programme, arranging to do most of her lab work at nearby Rutgers University. To compensate for the drop in salary, she became a consultant patent specialist two days a week. Her main client was Union Carbide. ‘I did technical and patent searches for the inventors and their attorneys there,’ she explains. ‘I also did patent searches for people at Rutgers and some small companies.’

Once she had completed her PhD, Rasmussen continued with her consulting work while maintaining her quest towards a prosthetic with human-like motion in the basement of her house. ‘I was zapping everything I could get my hands on,’ she explains. She was looking for a polymer that reacted to electrical stimulation in a similar way to human muscles.

In 2003, Rasmussen launched a start-up company called Ras Labs. Her breakthrough came in 2007, when an experiment that went wrong led to a polymer that contracted when attached to an electrode. The early polymers bent when zapped, but contraction is better for human-like motion.

Rasmussen has juggled a lot of plates to support her research, keeping up her patent work, doing contract chemistry work for others in her lab and teaching university graduate courses to supplement small research grants. She is now about two years away from getting her first product to market: a shape-morphing polymer designed to line the socket of prosthetics in order to ‘maintain a comfortable fit throughout the day’.

An autonomous, human-like hand with actuation will take another four to five years she predicts. ‘What I’m trying to do is create human-like grasp which is both gentle and firm at the same time,’ she explains. ‘It’s an oxymoron.’ In contrast to the traditional, metal-based, mechanical approaches with cables, pulleys and motors, Rasmussen’s hand will make use of her polymers, jointed links, a small amount of wire and a battery pack. This unique approach has brought her work to the attention of robotics researchers. ‘If we’re able to develop a human-like grasp in a streamlined cost-effective manner, it would be a game changer in the robotics community as well,’ she explains.

In 2013, she entered MassChallenge, a global business accelerator that offers both funding and practical support. One of the competition’s partners that year was the Center for the Advancement of Science in Space (CASIS), the organisation that coordinates research on board the ISS. Rasmussen’s polymers, known to be resistant to extreme temperatures, impressed two former astronauts on the judging panel. ‘Two of the judges said: “Wait a minute. If you can get this to be radiation resistant, and you can go down to basically absolute zero, this could also be used for deep space travel.”’

Tests using a gamma radiation source at Princeton University enabled Rasmussen to select additives and coatings to prolong radiation resistance in space. Now, 32 different versions are stuck to a wall at the far end of one of the ISS’s nodes. Once back home, she will compare them with the control versions in her Massachusetts lab. Radiation resistance is also of interest for Earth-bound robotics, she explains. ‘During a nuclear disaster, for example, you need a robot that can go in and perform human-like tasks such as turning knobs and pushing buttons.’

Rasmussen describes this project on the ISS as the highlight of her career so far. ‘I’m still pinching myself. I am such a space junky. I wish I was up there with my samples.’