All part of the service

Simon Hirst, founder of contract research organisation Sygnature, is the 2016 Chemistry World entrepreneur of the year

Many chemists cite an inspirational teacher as having driven their love of chemistry. Not so this year’s Chemistry World entrepreneur of the year, Simon Hirst – it was his uncle. ‘When I was 11, he sent me a chemistry set he’d put together himself,’ Hirst says. ‘It was full of exciting things like pieces of camphor, and I was totally hooked.’ 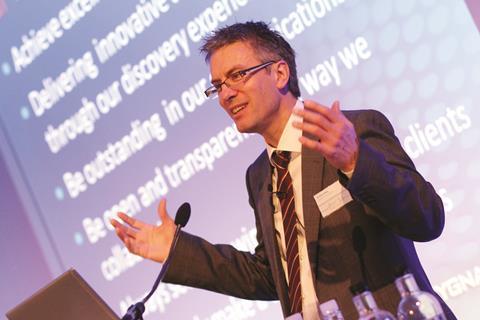 Simon Hirst founded Sygnature, which has grown from four chemists to a staff of 150 across various service areas

His dad built him a lab in the loft the next year. ‘Predictably, a couple of years later I had a pretty significant fire in there,’ he says. Amazingly, this wasn’t the end of his home chemistry exploits – his dad simply built another lab in the garage at the end of the garden. ‘He was incredibly supportive, given that he was a farmer and had no background in science,’ he says.

Hirst’s life in the more traditional lab started with a degree in chemistry at the University of Nottingham, UK, and he stayed on for a PhD with Ray Jones before heading to the US in 1988 for a postdoc with former University of Oxford vice-chancellor Andrew Hamilton (now president of New York University, US). Hamilton was then a new academic at the University of Pittsburgh. ‘He was overflowing with ideas and enthusiasm, and I spent a fantastic two years in his lab there,’ Hirst says.

He then followed the well-worn path back to the UK and the pharmaceutical industry, joining what was then Fisons in Loughborough in 1990. This became Astra about a year later, and just before the merger with Zeneca in 1999, Hirst departed for pastures new, at US-based OSI Pharmaceuticals (which was acquired by Astellas in 2010).

‘I was still based in the UK, but spent a lot of time travelling over to the US,’ he says. ‘In those days, it was a hybrid between a biotech and a service company – collaborating with a lot of other pharma companies – and was very innovative in the way it did things,’ he says.

A desire to return to the east Midlands led him to CombiPure, a tiny start-up just outside Nottingham, in 2002. ‘I was there just under two years, and that is where I made the transition from bench scientist to management – within six weeks of joining I was made managing director,’ he says. ‘It was a very entrepreneurial environment, and I learned a lot about collaboration and the importance of communication, which has been invaluable.’

Hirst left CombiPure to start Sygnature in 2004, taking four of his colleagues with him. The idea was to build a world-class chemistry services company, initially based around that small group of medicinal chemists. But the big question he faced was where to get the money needed to start the business. 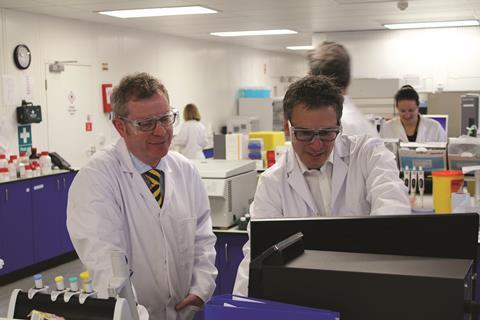 Hirst made the transition to management at start-up Combipure. He’s still involved in projects at Sygnature, but doesn’t do much lab work

‘CombiPure had been funded by business angels, and I found that made managing the business quite complicated. I didn’t want to go down that route with Sygnature,’ he says. ‘However, I knew I wouldn’t be able to convince larger investors to back us, so I had to find a way to set up a business without any investment at all. None of the textbooks tell you how to do that.’

Hirst persuaded a couple of potential customers to pay for three months of their services up front, allowing them to take a short-term lease in the newly completed BioCity campus on the former Boots research site in Nottingham, where there was lab space ready to move into. He even managed to lease a mass spectrometer, using his house as collateral. ‘That took a bit of explaining!’ he says.

Remarkably, he says, the company was turning a profit within six weeks of beginning operations in October 2004, and soon looking to recruit further scientists. Hirst also took on a part-time finance director, Julie Ebbitt. ‘She was a management accountant with experience in business operations, and helped to create credible business plans we could deliver on,’ he says. ‘It might seem strange for a science start-up that employee number two was a non-scientist, but it made perfect sense to me. There’s no shame in identifying where you need help.’

A third, non-executive, director – John Slack – joined a few months later. ‘He was an experienced pharmaceutical scientist I’d worked for at OSI, and who had previously started and sold Aston Molecules,’ Hirst says. ‘He is to this day a great sounding-board and mentor. It’s unusual for a small company to get a non-executive director on board so early, but I think that’s a mistake – there are many people who can assist you growing your business, and this is a great way of gaining that assistance and expertise.’

Sygnature has continued to grow, both by organic expansion and by strategic acquisitions. ‘We were completely focused on medicinal chemistry at the beginning, but we created a bioscience group after AstraZeneca closed its site in Charnwood,’ Hirst says. ‘We also have a growing computational chemistry group, and in January last year we started a drug metabolism and pharmacokinetics  [DMPK] group. We now have 150 staff. There are 80 scientists (mostly PhDs) in the chemistry group, about 30 bioscientists, seven computational chemists and a DMPK group of nine.’

In 2015, the company embarked on another venture, by backing in a protein purification and X-ray crystallography group being spun out from AstraZeneca’s Alderley Park site. Sygnature is a major investor in this business, Peak Proteins, and Hirst says it provides one of the puzzle pieces he felt was missing from the company’s operations.

The current client list runs the whole gamut from very large pharma companies to tiny biotechs, with about a half of them UK-based, and a third in the US. ‘Small and medium biotechs are our largest customers,’ Hirst says. ‘It’s partly because they don’t have the time, resources or people to build their own capabilities. They set out with outsourcing and collaboration in mind.’

When Sygnature was set up 12 years ago, he says, development activities were outsourced by big pharma, but not early stage activities like medicinal chemistry and drug discovery programmes. ‘I was always convinced it would follow the same path as the development activities, and it would become normal to outsource this work,’ he explains. ‘Big pharma has taken quite a long time to reach that position, but this change in the industry has been our opportunity for growth, and I believe it is one of the reasons we have been so successful.’ 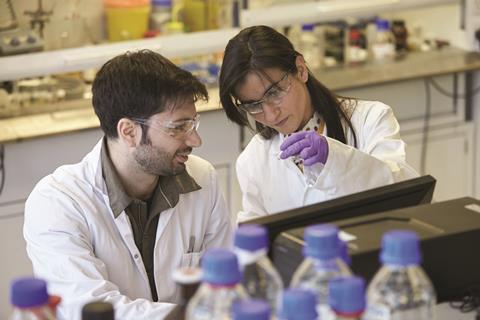 Many of Sygnature’s employees came from big pharmaceutical companies, but the company is now looking at training the next generation of researchers

The changing industry landscape also enabled Sygnature to recruit experienced chemists. ‘To be successful, we had to recruit people with good experience, and that meant recruiting from big pharma,’ he says. ‘Convincing people to leave their relatively safe environment for a little start-up was tough in the early days. But we had some key successes, and as big sites closed, there was a flood of really excellent people coming out of pharma companies.’

The future will see another recruitment change, Hirst claims, as there will be fewer scientists coming out of big pharma. ‘We will have to take on the role of training and developing people straight from university, teaching skills in drug discovery and collaboration ourselves,’ he says. ‘We’re working with people like the Royal Society of Chemistry’s EnterprisePlus scheme to look at ways of doing this.’

All of the company’s shares are still held by its employees, and it is debt-free. ‘There are pluses and minuses, of course,’ Hirst says. ‘It does limit growth to the rate at which revenues can be generated, but it’s not held us back too much – we have grown by about 250% in the past five years.’

And that growth means that early next year they will move into a new building on the BioCity Nottingham site. ‘Nottingham City Council is paying for it as they were keen to keep us in the city, and BioCity will manage it,’ he says. ‘We will be the anchor tenant, taking 65% of the building. It will ensure we will continue to have room to grow under one roof, which is important to us. Our philosophy is to be integrated, with chemists, biochemists and DMPK people all together in the same labs. It’s incredibly important to get communication working properly between scientists so ideas are shared. Breaking into silos is a retrograde step.’

And, having been involved in the building’s design, it is modelled around their workflow. ‘The space we are taking will allow us to grow to more than 200 people, with room to grow to about 300 in time,’ he says.

Over the years, Hirst has relished learning to combine chemistry and drug discovery with the business side. ‘All four of the chemists who originally started the company with me are still with the business, and an integral part of what we do,’ he says. ‘Some of our early recruits are now quite senior, and essential to our continuing journey. It’s been an exciting ride.’

For the first couple of years, he managed to combine working in the lab with running the business, but as it grew this became impossible. ‘Chemistry is still what drives me,’ he says. ‘I love it. As soon as I get up, I’m thinking about ongoing projects. I’m just sad that it’s impossible for me to work in the lab any more. However, this business always has exciting new challenges!’