A stint in a US chemistry lab is a rite of passage for many academics. Sarah Houlton talks to the chemists who went to the labs of opportunity 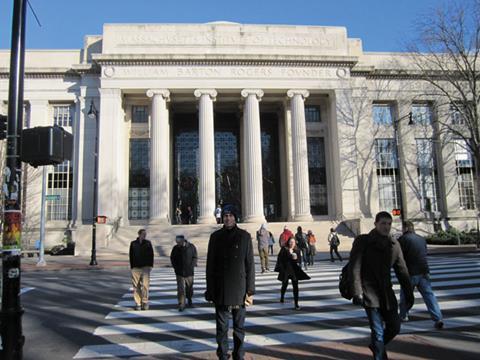 Whether you plan a chemistry career in academia or industry, living and working in a foreign country is a great way to expand your scientific horizons. And with so many great chemistry departments to choose from, and no language barrier for English speakers, a lot of chemists choose to head stateside for a PhD or postdoc.

Anyone moving to the US for work faces some hurdles. You need a social security number (SSN), which requires an address; but finding somewhere to live without an SSN can be tricky. A credit card is almost essential, but it can be difficult to get one without US credit history.

The tax system is also complex. Postdocs may be tax-exempt for two years, depending on the source of their income, but there might be a big back-tax bill if they stay longer.

And, of course, a visa is required. Typically, a PhD student or postdoc will have a J-1 exchange visitor visa. It’s fairly expensive – currently $160 (£93), plus another $30 for delivery.

However, once the practicalities are under control, the opportunities for scientific advancement and cultural enrichment are significant.

University of Oxford graduate Nessa Carson is in the first year of a PhD at the University of Illinois at Urbana–Champaign. As an undergraduate, Carson spent three months at Illinois for a summer internship and was keen to return.

The application process was different from the UK, Carson says, with no formal interviews. ‘I wrote a personal statement and sent it to colleagues I’d met during my internship to check,’ she says. ‘They told me to write a storyline of my life rather than the UK-style focus on academic achievements.’

Carson has a bursary from the university, and pays her tuition fees through teaching. In her first semester, she taught a general chemistry course to first-year undergraduates. ‘I had 100 students split into four groups, and I’d run through the professor’s lectures. That took about eight hours a week, plus preparation,’ she says. ‘Last semester, I did lectures for an online course. That was more enjoyable as I was teaching organic chemistry.’

Carson expects that after another year as a teaching assistant, she will switch to a research assistantship, allowing her to focus solely on lab work for the remaining three or four years of her PhD.

David Macmillan also headed to the US for his PhD back in 1991, and is still there, now as a professor at Princeton University in New Jersey. As an undergraduate in his home town of Glasgow, he was keen to see the world, and as a summer student at ICI in Grangemouth, conversations with colleagues who’d studied in the US convinced him to head west.

‘I picked 10 professors out of [the Journal of the American Chemical Society] and wrote to them,’ he recalls. ‘Only one replied – Hal Moore at the University of California at Irvine. He encouraged me to fill out an application form, and I was accepted.’ On arrival, Moore gave him carte blanche to pick a group, and Macmillan chose Larry Overman.

The US five-year PhDs are two years longer than the UK, but that didn’t dissuade Macmillan. ‘When you’re 20, both seem like an unbelievably long time!’ he says. He enjoyed his time there so much he claims Overman practically had to escort him out of the door after six years, when he moved to Harvard for a postdoc with Dave Evans. 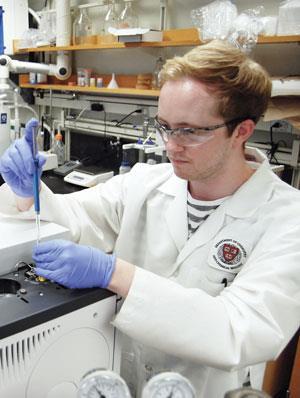 While it’s unusual for Brits to head to the US for a PhD, Macmillan says the opportunities, and the demand, are there. ‘People would love to take Brits for graduate school, but they don’t apply,’ he says. ‘This is the first year in 16 running a research group that I have had British PhD students.’

Macmillan also points out that while funding is limited for foreigners to postdoc in the US, both US and non-US students compete equally for PhD studentships.

The path from UK PhD to US postdoc is much better trod. Euan Kay was looking for wider experience, both chemically and geographically, after his undergraduate, PhD and postdoc years at the University of Edinburgh. ‘I wanted an academic position, and a postdoc helps you take that next step on the career ladder,’ he says. ‘I also wanted to move into another area of chemistry, so I combined the two and took a postdoc with Moungi Bawendi at [the Massachusetts Institute of Technology] in 2008.’

Stephen Wallace also started at Edinburgh and, following a PhD in Oxford and a postdoc at the University of Cambridge, is now working for Emily Balskus at Harvard University. ‘There is a perception in chemistry that a US postdoc is normal if you want to go down the academic track, but that’s not what brought me here – it really was the research, and the chance to learn some new science,’ he says.

Rob Paton was also looking for wider experience. After completing degrees and a fellowship at Cambridge, he headed to UCLA in 2009 to work with Ken Houk. ‘It was a great opportunity to work with a world leader in computational organic chemistry, and also experience a large research group of about 40 people,’ he says.

Ellie Beck also did her first degree and PhD at Cambridge. She wasn’t looking for an academic career, but felt a US postdoc would help her find a job in industry. ‘I’d met Harvard’s Eric Jacobsen, and spoke about my research,’ she says. ‘I contacted him about the possibility of a postdoc, and he said yes.’ She started there in 2008.

The first challenge for potential postdocs is securing funding. Wallace was awarded a Marie Curie fellowship from the EU, so is there on his own money. The application process was pretty onerous, he says, and after two years in the US he is expected to return to his ‘home’ institution – Cambridge – for a year.

Kay’s postdoc was funded by a fellowship from the Royal Commission for the Exhibition of 1851. These fellowships, of up to three years, are normally given to UK-based postdocs, but exceptions are possible. Of the cohort of seven starting last year, one is currently in the US.

Paton took another route: he was a Fulbright AstraZeneca scholar for his year at UCLA, and Beck gained a scholarship directly from Harvard University. And if you offer a particular skill that a group leader is looking for, they may even find the money to pay you from their own funds. 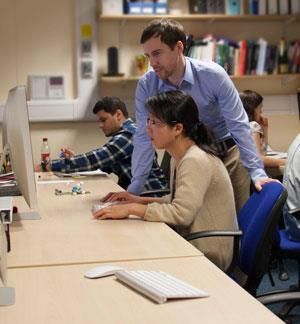 Tales of US postdoc life often include scare stories of slave-driving supervisors demanding seven-day weeks and 14-hour days. But in reality, few are like that. ‘Everything I’d heard about Jacobsen was positive, and I didn’t want to go somewhere where crazy hours were expected,’ Beck says. ‘[Jacobsen] assumes everyone will work hard, and doesn’t feel the need to set hours. There’s group pressure if you’re not working hard enough, and I worked just as hard in the UK.’

Wallace, though, admits he knew there was a lot of hard work ahead. ‘Six days a week, 12 hours a day is expected,’ he says. ‘That’s fine – it was made clear to me beforehand, and since I love what I’m doing, it’s like being paid to do a hobby.’

For those who dream of forging an academic career in the US, the tenure system affords six years to establish yourself. ‘They give you huge amounts of resources and funding to launch a research programme – $1–1.5 million is not uncommon,’ Macmillan says. ‘Many people don’t want to go for it for fear of failure, but even if you don’t get tenure, there are still excellent jobs to be had.’

Others, such as Beck, choose to leave academia, but stay stateside. ‘I applied in both the UK and US, and got a job as a medicinal chemist at Pfizer in Groton [Connecticut],’ she says. ‘With the changes in the company, I moved back to Cambridge, Massachusetts, where I am now. My husband was working here, so we were lucky – it can be quite hard coordinating two careers, particularly in the current job market.’

But many prefer to return home once their US tour is up – Kay’s plan was always to return within two years. ‘While my wife and I were happy in Boston, I might have had to take a job anywhere in the US to get that foot on the ladder,’ he explains. He’s now a Royal Society of Edinburgh Fellow at the University of St Andrews, where he’s been since January 2011.

Paton also returned and is now an associate professor at Oxford. He says his US experience made his application stronger. ‘It increased my international network, and there is a lot of value in having US connections, such as journal editors and conference organisers,’ he says. ‘Experiencing different styles for running groups also helps you decide how you want to run your own.’

Words from the wise

Kay advises anyone considering the trip to go with an open mind, and be ready to embrace the differences. And Paton counsels potential postdocs to look for their own funding, to have more freedom in choosing a group.

Macmillan’s advice is simple: just do it. ‘It’s an adventure, and you should have a lot of fun,’ he says. ‘The world is so small these days it’s easy to go back and forth. Working in the US will really help you expand your horizons.’