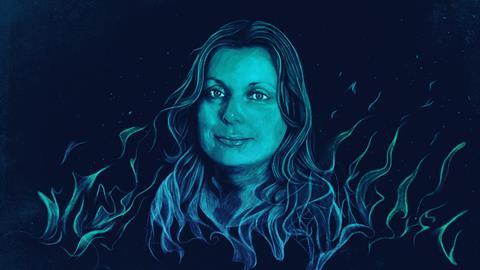 In situ with Angela Russell

Angela Russell is a professor of medicinal chemistry at the University of Oxford, UK, where her group works on the development of small molecule therapeutic agents for the treatment of degenerative diseases. She has co-founded two successful spinout companies and was awarded a 2021 Harrington UK Rare Disease scholarship in recognition of her work on developing a therapy for Duchenne muscular dystrophy.

My dad trained as a scientist and was always very enthusiastic about science when I was young. I remember lighting methanol on the floor of the garage as one of our earliest experiments!

I had a really inspirational teacher during my A-levels. When I was thinking about applying to university, he took the time to talk to me about his research. As he described his experiments, I could predict the experiment that he would do next. I guess at 17, that really flips something in your brain and I felt that this was something that I could do, that there’s something in my brain that makes me think like a scientist.

I thought very long and hard about whether I wanted an academic career. Originally I had thought that I would just like to focus on research but I realised that I also really enjoy teaching. I loved being able to nurture the talent of the next generation coming into science, alongside the opportunity to think about research and move forward to answer new questions. That combination I found really potent.

For 20 years now we’ve worked on a rare neuromuscular disease called Duchenne muscular dystrophy. We were there at the very beginning and the research has evolved so we were able to take a drug to trial. It didn’t ultimately work but I’m proud that we did it and that we bounced back from the failure. Instead of giving up, we’ve been able to generate next-generation molecules that overcome the problems with the compound that we took into the clinic. So I hope it’s not the end of the story yet!

If I achieve nothing else in my career, I want to cure Duchenne. I would like to bring a drug to the clinic that genuinely works and gives sustained benefit to those patients. More broadly than that, the work on Duchenne inspired us to think more generally about degenerative disease and how maybe we can stimulate these regeneration responses, not just in muscle, but in all sorts of other tissues in the body. I think that this could be really transformative to medicine in the future.

I think knowing where you want to go is probably one of the biggest secrets behind creating a successful research spinout. When we set up the first company, it was very clear that a potential exit was that we could be bought by a bigger company who would acquire our assets. We hoped that by working together with a bigger company, we could progress those drugs into the clinical pipeline, and that’s exactly what happened.

We have to not be afraid of failing because that encourages you to be bold. We face failure at all levels, all the time, all of us. But as scientists we need to then be able to come back from that, and actually build for the future. Embracing that is really important.

The biggest challenge that I faced in my career was Covid, particularly those months and months when the schools were out. Going from an hour lesson in phonics or maths to a six-year-old, to then talking to my group about a research paper, or finishing off a research grant, then back to teaching English. It was tough trying to balance so many different demands. I think if I hadn’t previously learned how to be disciplined about managing my time, that would have been even more of a struggle.

There’s still a gender imbalance at the highest levels in research institutions, particularly going from postdoc to first independent position. And I think we have to tackle this in recruitment and by creating a more inclusive research culture. At the graduate access level, the Chemistry in Cells doctoral programme at the University of Oxford announced that we were going to anonymise our applications for gender identity, gender and ethnicity so there could be no implicit bias whatsoever. And what we found was remarkable: We moved from about a 70:30 gender split to 50:50 in our application pool and this remained consistent through to the number of people that we shortlisted and the number of people who were awarded places.

If I wasn’t a research scientist, I think my alternative calling would have been a chef. I love cooking for my family, and as my children are getting a little older, sharing this with them is lovely as well. My son has a particular proclivity for cooking and loves baking and creating things in the kitchen.

I think interacting with your family is the best way to de-stress and just say, okay, I can forget the things that I’ve been worrying about, the things that are keeping me awake. I can just indulge in my family. It’s good for them and it’s good for me. I’m also an avid reader and my daughter loves reading as well so we’ll often read together.