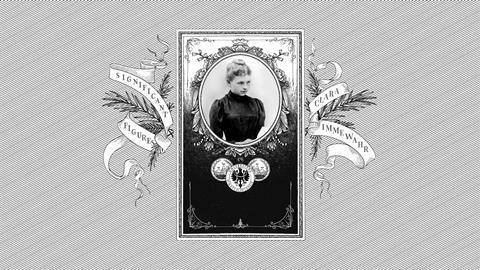 Clara Immerwahr – out of her husband’s shadow

The tragic story of the chemist best known as Fritz Haber’s wife might not be as clear cut as many believe, finds Bárbara Pinho

In 1901, the German Electrochemical Society held its annual conference in Freiburg with a significant difference – for the first time ever, a female scientist sat in the room. Her name was Clara Immerwahr, the first woman to hold a doctorate degree from the University of Breslau. The event turned out to be the place where Immerwahr started to settle her scientific path. It was also where she met someone who, according to some, would soon threaten her career: her future husband and future Nobel laureate, Fritz Haber.

Clara Immerwahr was born in 1870 in a small province close to Breslau (now Wrocław in Poland). During the second half of the 19th century, Breslau became a centre for science, culture and business, and its Jewish community was the third largest in Germany. The Immerwahr family belonged to the Jewish middle class, wealthy yet humble in their lifestyles and manners. Immerwahr’s father was a PhD chemist who worked as an agronomist and co-owned a store in Breslau. Amid values such as modesty and simplicity, the Immerwahrs valued education for all, both boys and girls. But the German educational system wouldn’t make things easy for Clara Immerwahr.

‘It’s very impressive that she was willing and able to take this difficult path into the domain that was dominated by male scientists, academics. The hurdles that she had to overcome were immense and essentially unimaginable, incredibly humiliating,’ says Bretislav Friedrich, research group leader at the Fritz Haber Institute of the Max Planck Society in Germany. Friedrich works on molecular physics, but he and his colleague Dieter Hoffmann have written several articles, papers and book chapters about Clara Immerwahr.

What Fritz has gained during these last eight years, I have lost

As Immerwahr was not allowed to attend German high schools, she attended a women’s college Höhere Töchterschule in Breslau. The school would ‘provide a basic education for young women that was compatible with their social status and to prepare them for their “natural purpose”; that is, as companions of their husbands, housewives and mothers’, Friedrich wrote in one of his papers. Even though this was not Immerwahr’s wish (she wanted to be a scientist like her father), options were scarce. To complement her education, she had a private tutor during the summer and graduated in 1892, at the age of 22. Afterwards, she entered a teacher’s seminary, not her ideal choice but one forced by necessity. Again, this was the only type of institution offering higher professional education to women. Even with such a degree, however, Immerwahr would remain ineligible to attend a university. To qualify for higher education studies, she had to attend private lessons and do a special exam. In 1896, she passed it and was finally admitted to the University of Breslau. Still, her opportunities were far more limited than those of her male peers.

Women were not then legally admitted as university students in Prussia; they could only attend lectures as guests. Even this option was difficult because women needed permission from faculty professors and administrators. Nevertheless, Immerwahr took it. She was accepted and eventually found a professor who helped her boost her scientific career. His name was Richard Abegg.

‘She was fortunate to have come across someone who was very supportive of her and paid very little heed to the various restrictions that he was supposed to operate under at the time,’ Friedrich says. ’Abegg later became her confidante and some of the critical things that we know about her marriage, we know thanks to the letters they exchanged.’

She was a reliable partner in the laboratory, conscientious and competent, who did research that mattered at the time

Abegg was a chemist and lecturer at the Chemistry Institute of the University of Breslau. He became Immerwahr’s supervisor after sparking her interest in physical chemistry, then a relatively new field and one he relished. In particular, her work would focus on solutions chemistry, revolving around ‘connections among solubility, degree of dissociation, ion concentration, osmotic pressure, and electrochemical potential,’ Friedrich wrote in another paper. She performed experimental investigations of the elements cadmium, copper, lead, mercury and zinc and of their salts to expand an empirical base to assess the elements’ electroaffinity. She published three papers, an erratum and a supplement covering this topic. ‘This field is pretty old hat now. The work she was doing does not seem to have contributed to the conceptual framework of physical chemistry. It did not start any new directions of research,’ Friedrich says. ‘But she was apparently a reliable partner in the laboratory, conscientious and competent, who did research that mattered at the time when she was doing it.’

Finally, after a hindered journey, Immerwahr defended her PhD thesis on the solubility of heavy metal salts in December 1900, becoming the first woman to do so at the University of Breslau. The year after, she attended the German Electrochemical Society’s annual conference in Freiburg, where she reunited with Fritz Haber, an established German chemist.

Some speculate Haber and Immerwahr had already met in a dancing class in 1885 and so the conference in 1901 may have been a reigniting of their relationship. They got married later that same year. Margit Szöllösi-Janze, the biographer of Haber and Immerwahr, described this wedding as the end of Immerwahr’s science career and for valid reason: after marrying Haber, she would never again conduct research of her own.

But Immerwahr certainly tried. She couldn’t go back to the lab, but she conducted public lectures about the chemistry and physics of the household in Karlsruhe, where the couple lived. The couple had no substantial wealth back then, so household chores occupied most of her time. She was still confident that the scenario would change one day and that she would return to the lab. In a letter she sent to Abegg, Immerwahr wrote, ‘once we become millionaires and will be able to afford servants […], I cannot even think about giving up my [scientific work].’ Unfortunately, with the birth of their only child in 1902 and Haber’s heavy focus on his burgeoning career, Immerwahr’s dream of going back to making science kept moving further away. She wrote to Abegg later on, in 1909: ‘What Fritz has gained during these last eight years, I have lost, and what’s left of me, fills me with the deepest dissatisfaction.’

Not long after, the first world war began. As a proud German citizen, Fritz Haber moved to support the German army, becoming a consultant to the Ministry of War and leaving his family many times during the conflict. In 1915, under his guidance, the German military launched more than 168 tons of chlorine gas over Allied troops in Ypres. The successful attack would earn Haber a promotion, and a celebratory party in his hometown. Shortly after the celebration, in the garden of their house, Clara Immerwahr held Haber’s gun against her chest. She pulled the trigger, taking her own life. Their son found the body.

The sad ending of Immerwahr’s life has inspired many documentaries, books and films about her. Across all of them, there’s the message that Immerwahr killed herself because she was a pacifist who was incapable of coping with the idea of her husband using science to commit mass murder. After reviewing all the available letters and documents from Immerwahr’s life, however, Friedrich and Hoffmann found no evidence to back such claims.

‘I think people believe the distorted and fabricated accounts of [Immerwahr’s] life, work and legacy because this is what they are familiar with. The distortions and fabrications have received quite a bit of publicity through numerous dramatisations,’ Friedrich argues. He also mentions that the pro-peace, antiwar and feminist discourse around these claims created an ‘irresistible image of Clara’ that was most probably not true. Friedrich and Hoffmann believe that her suicide was perhaps due to her deep dissatisfaction with life, and the recent deaths of Abegg and her best friend.

Clara Immerwahr was born in a time when finding a seat in academic auditoriums was nearly impossible for women. After much perseverance, she still found her place, only to lose it later on to the path her personal life would take. When asked whether Immerwahr’s life would have been different had she not gotten married, Friedrich admits he does not know. ‘One can look around and consider, for instance, the case of Lise Meitner. They [Immerwahr and Meitner] were members of the same circle in Berlin. The fact of the matter is that Lise Meitner never married. And I think some scholars are of the opinion that this was one of the enabling factors for her scientific career, that she was able to be 100% dedicated to her work in the lab.’

We may never understand the reason behind Immerwahr’s suicide and what scientific discoveries she could have made had she had the chance to conduct her own research. Despite the many uncertainties around Immerwahr’s life, there’s still one clear fact. She earned her PhD with an incredible effort, and neither marriage nor suicide can erase that.

Bárbara Pinho is a science writer based in Porto, Portugal