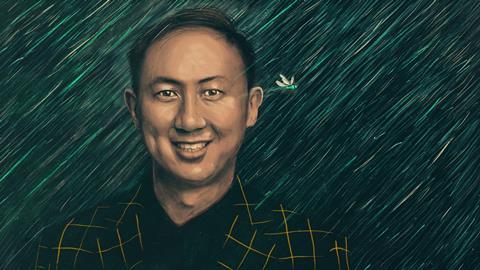 In situ with David Hu

The fluid dynamicist on playing chess, bringing science to the public, and the beauty in everyday life

David Hu is professor of fluid mechanics at the Georgia Institute of Technology in the US. Among numerous high-profile studies, his ‘laboratory for biolocomotion’ has revealed how dragonflies avoid raindrops, the viscoelastic nature of ant assemblies, why mammals take 21 seconds to empty their bladders, and how wombats make cube-shaped faeces. Hu is a joint recipient of two Ig Nobel prizes.

My wife tells me I have more bikes than any person she knows. I have this fascination with timescales – when you’re on a bike, you see the world zooming past. It’s a totally different feeling than if you’re on the ground. Cycling speeds things up, but in a lot of my research, we slow things down.

I’ve got a son who’s nine, and a daughter who’s seven, and they’ve been inspirational to me. They’ve totally changed my lifestyle. I started as a professor when I was single, living in apartments… fast forward 10 years and I’m basically cleaning all the time, because they leave piles of breadcrumbs and hand marks everywhere. Its influenced my research – we had a whole series of papers on cleaning. If I hadn’t changed my son’s diapers, I wouldn’t have discovered the law of urination.

I play a lot of chess. I consider it to be the cheapest form of babysitting – we can pay $50 and my children will have an 18 hour tournament over the weekend. Inevitably, instead of waiting for them, I’ll end up playing too. It’s like a sport, because the games are four hours long and you have to be able to concentrate. And the stress goes up and down. They put heart-rate monitors on professional players and showed that for the really good ones, their hearts don’t change. But for me, when I’m being beaten by a seven year old, my heart is racing.

My father would take me on fishing trips. He was a chemist, and so we’d just be talking about fishing lines, and he would start explaining how nylon works. We couldn’t have a normal conversation without him mentioning polymers or carbon – he knew chemical structures for everything. There was no world outside of science because he’d just naturally bring it up. I think that gave me this idea that science was everywhere from the very beginning.

‘There are moments when you wonder if your life is real, or if it’s just some big joke’

People ask me the strangest questions. We gave a talk on our defecation paper and someone whose kid was reading this nature magazine – Ranger Rick – said, ‘My kid was reading something about cubic faeces. Your model is all about cylindrical faeces. How can you modify your model to make it cubes?’ Of course, I had absolutely no idea how to answer this question. Luckily we found a great collaborator in Australia who studies wombats, and he sent us one through the mail. We opened the intestines up and there were these cubes inside. There are moments when you wonder if your life is real, or if it’s just some big joke.

If I had to choose a last meal, it would be my mom’s dumplings. She makes them by hand. My dad has always been a big gardener – he’d grow squash and they’d mix it with pork, egg and mushrooms, and put it in these skins. Then you steam them and it keeps all the juices in. I’m starting to get hungry just thinking about it.

My kids really like Miyazaki’s Studio Ghibli movies – he often has weird animals, which I like too. Half his movies are people not doing anything. He always has scenes with people eating, or putting on their shoes in weird ways that show how kids really put on their shoes. He puts lots of everyday moments in the movies, but makes it look beautiful. I think in some ways, that’s what science does too – it makes everyday life seem really beautiful when you break it down into parts.

I train my group how to work with the press. Every time we write an article, we make a whole press kit with all the funny things that happened in the paper, a website, downloadable PowerPoints. We try to interact with the public, and we put an inordinate amount of time into it. A lot of PIs would consider this a total waste of time. But making your work more relatable brings people in. It’s fun, and when more people are asking the students questions, it makes them feel good about their work.

We always try to take a beautiful, sometimes disgusting image that sums up a whole paper in one image. I really like doing that. My rationale is that when I’m retired, I’m not going to want to write math, but I will want to look at some pretty pictures. I want the elephant urinating, the wombat cubic faeces, the fried rice – I want to have this weird Addams Family-type scrapbook of all these things.

Everyone thinks science needs to be serious. But a lot of things that inspire people are the everyday things they can remember and talk about. A lot of people think that studying things that people can understand is wasting money and wasting time. But there’s really fascinating stuff there. There’s lots of interesting physics that’s not at the nanoscale and not at the cosmic scale, but just the scale of toys and balls – chaos theory was based on toy-size experiments. And the public reaps the benefits – people are intrigued by this stuff, and it leads to really interesting science.