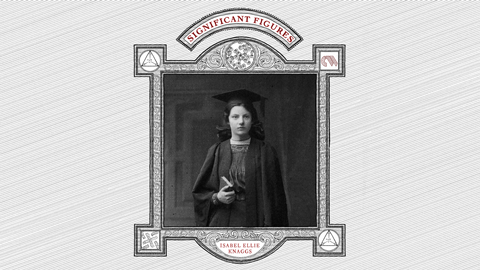 Ellie Knaggs’ claim to be the first to use x-rays to prove carbon’s tetrahedral bonding in molecules has been overlooked, finds Andy Extance

Carbon’s tetrahedral bonding is a central pillar of modern chemistry, yet the first person to ‘see’ it in organic molecules using x-ray crystallography is barely known to many chemists. In 1929, Isabel Ellie Knaggs published her x-ray derived structure of pentaerythritol tetraacetate, correctly interpreting the shape bonds around the atom at its centre took on.1

But that’s not how history has recorded things. Instead, an International Union of Crystallography newsletter gave the credit to Japanese chemist Isamu Nitta for using x-ray crystallography to confirm ‘the anticipated tetrahedral coordination in methane derivatives’.

Nitta and Knaggs had pursued the question separately in the 1920s and 1930s, according to Bart Kahr of New York University in the US. Knaggs confirmed the tetrahedral shape ‘first and more completely’, Kahr believes. She went further in trying to place the side chains attached to the carbon atom, and proposing atomic models, he wrote in the paper where he first highlighted Knaggs’ claim.2

Kahr explains that Knaggs’ success came because she paid close attention to prior findings. ‘By the time Knaggs did her work, the tetrahedral coordination of carbon had been established beyond a shadow of a doubt by Emil Fischer and many others,’ he says. ‘Her work was more like icing on the cake. Seeing it in an x-ray structure was a big result, more for x-ray crystallography than for structural chemistry I would say.’

Ellie Knaggs was born in 1893 in Durban, South Africa, where her English father had moved to relieve his suspected tuberculosis symptoms, Knaggs’ niece Elaine Mayer explains. Ellie and her sister Marjorie, Mayer’s mother, moved to England to live with their grandfather and his wealthy fourth wife after their mother died in childbirth. Their new guardians ‘really were ahead of their time in terms of education’, says Mayer.

The Knaggs girls attended the North London Collegiate School, where mathematician Sophie Bryant was head. Bryant would have been a striking role model. She the first woman to receive a first class honours Bachelor of Science degree and the first to receive a Doctor of Science degree in Britain – and among the first women to own a bicycle. Riding in Bryant’s tyretracks, Ellie Knaggs studied chemistry at Girton College, not then a full part of the University of Cambridge. At the time, female students could study and sit the university exams – but still not receive a degree. She would graduate with a PhD from Imperial College London in 1923, beginning the scientific adventure she would continue throughout her professional life.

Knaggs immediately joined William Henry Bragg at the Davy–Faraday Laboratory of the Royal Institution. Her application form can still be found in the Royal Institution archives. It specifically says that her three day-a-week research project would build on her PhD work producing crystal structures of carbon compounds with the formula CX4. But many of Knaggs’ studies would also involve potentially explosive nitrogen-rich materials – possibly related to what Mayer calls her ‘secret war work’. For example, she is probably best known for discovering that the azide groups in cyanuric triazide are linear.3

Crystallography entails a great deal of mathematical analysis, nowadays performed by computers. In Knaggs’ time, it involved analysing spots formed on photographic films by x-rays diffracting off atoms in crystalline materials. To interpret chemical structure information from the spots’ positions requires very difficult calculations. In their efforts to output the right structures, scientists need to work out which formulae to apply. The choice depends on the symmetry in the crystal, which in Knaggs’ time was usually only partly known, or completely unknown. Successful results therefore depended on choosing molecules that offered some kind of clue – and then getting their symmetry right.

Knaggs knew that Bragg and his son Lawrence had determined that diamond comprises a tetrahedral carbon framework in 1913. Yet the idea that carbon atoms in discrete molecules were also tetrahedral, although widely accepted, had not been confirmed with x-rays. In 1925, Knaggs tackled the molecular carbon question in the explosive pentaerythritol tetranitrate. Her calculations only produced reasonable structures if the central carbon’s bonds were arranged tetrahedrally.

Studying pentaerythritol tetraacetate, Knaggs also found a tetrahedral arrangement , first communicating her results in ‘a private communication to the Council of Girton College’ in May 1927. In 1928 a German group published a pyramidal structure for pentaerythritol tetraacetate. In rebutting them in a Nature paper before publishing her full structure Knaggs asserts that ‘the carbon atom plays the part expected of it’, meaning it was tetrahedral.4 She makes ‘the first unequivocal statement derived from x-ray data that a methane derivative has tetrahedral coordination as far as I am aware’, Kahr writes.

Yet when T H Goodwin and R Hardy from the University of Manchester returned to refine Knaggs’ preliminary model in 1938 they were dismissive.5 Acknowledging that she had corrected the previously published space group for the crystal, they wrote that ‘no good purpose would be served by discussing’ her molecular structure. Kahr thinks that this is ‘hardly sporting’, as x-ray diffraction was a fast-moving field and much had changed in 10 ten years. ‘Denigrating someone else’s work to elevate your own is a strategy that should not stand up to scrutiny,’ Kahr adds. ‘The collective dismissal of the work of Ellie Knaggs succeeded.’

Nitta, meanwhile, published work on pentaerythritol’s crystal structure in 1926.6 But he didn’t commit to whether its central atom is tetrahedral or not. Instead, he partly follows the lead of previous scientists who had suggested an incorrect symmetry for pentaerythritol’s crystals. He uses his own data to narrow down the symmetry to just two options. But he concludes that ‘these data may not be sufficient to decide’ upon the symmetry that would yield a tetrahedral structure.

In the influential textbook Fifty Years of X-ray Diffraction, however, Nitta gives a different impression. Going by the shape of pentaerythritol crystals, he writes, he chose a symmetry ‘which enabled the central carbon atom of the molecule to conform with the tetrahedral distribution’. Looking back at Nitta’s papers, Kahr discovered that he hadn’t actually decided on the right symmetry until 1937.7 In that paper Nitta writes that ‘there is no other x-ray investigation yet imparted which confirms the presence’ of tetrahedral carbon atoms in organic crystals, overlooking Knaggs’ work.

Her absence in the discussion is conspicuous

Research from Geoff and Marelene Rayner-Canham from Memorial University of Newfoundland, Canada, made Kahr aware of Knaggs’ contributions. The Rayner-Canhams have reconstructed women’s roles in the early years of x-ray crystallography. In their book Chemistry Was Their Life, the Rayner-Canhams cite crystallographer Helen Megaw, another Girton College alumna, who wrote an obituary for Knaggs in 1981. Megaw described Knaggs as a ‘kind and gentle person, rather shy’. ‘She attended scientific meetings, but did not put herself forward,’ Megaw says.

Mayer agrees that Knaggs was definitely ‘not an extrovert’. Among many fond family recollections, she proudly remembers going to a Royal Institution public lecture with her aunt as a child. Mayer moved to Sydney, Australia, in 1954 and Knaggs would ultimately follow in 1977, when she started showing signs of dementia. ‘My sense is that Aunt would have been deeply disappointed and angered but not surprised,’ by Nitta’s actions, she says. ‘Perhaps she did not even know the full extent of the scientific theft. Above all she would be protective of her rare position and privilege in working at the RI, which was her life and which she had earned all on her own and against the odds.’

Meanwhile, Kahr suspects that Nitta was aware of Knaggs’ findings, but found them inconvenient. ‘Her absence in his discussion is conspicuous,’ Kahr says. ‘Gracious authors don’t write as he did. Science is a shared practice.’