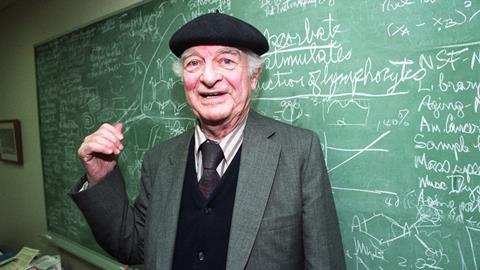 Rules devised by double Nobel prize winner Linus Pauling describing the preferred crystal structures ionic compounds adopt are more like loose guidelines, chemists in Belgium have discovered. Janine George, Geoffroy Hautier and colleagues at the Catholic University of Louvain tested the five rules against 5000 oxide structures. They found that just 13% satisfied four of the five rules, a fact Hautier describes as ‘shocking’. ‘These rules, despite being taught in every chemistry textbook, have a much lower predictive power than one would think,’ he says.

Pauling developed the rules in 1929 by connecting his unrivalled knowledge of both inorganic crystal structures and the underlying bonding theories. Hautier notes that some exceptions had already been found, and the rules improved on that basis, although they’re often still used in their original form.

Pauling’s five rules have been used for decades to rationalise the crystal structures of ionic compounds.

Hautier and colleagues work on methods for predicting new materials, and had sought to build on Pauling’s rules. ‘We started realising that they had many exceptions and that no real statistical assessment of these rules had ever been made,’ he explains. The researchers have developed software that automatically detects the coordination geometry of shapes that atoms form around each other in crystals, and the connections between them. ‘Combined with the easy access to a database of crystal structures, this enabled us to scale up the assessment of the Pauling rules to an unprecedented level and to perform a truly statistical benchmark of these rules,’ Hautier says.

Five rules to rule them all?

Radius Ratio Rule: ‘The coordination number of the cation is determined by the radius ratio of cation and anion.’

Electrostatic Valence Rule: ‘In a stable coordination structure the electric charge of each anion tends to compensate the strength of the electrostatic valence bonds reaching to it from the cations at the centres of the polyhedra of which it forms a corner.’

The Sharing of Edges and Faces: ‘The presence of shared edges, and particularly of shared faces, in a coordinated structure decreases its stability.’

The Nature of Contiguous Polyhedra: ‘In a crystal containing different cations those with large valence and small coordination number tend not to share polyhedron elements with each other.’

The Rule of Parsimony: ‘The number of essentially different kinds of constituents in a crystal tends to be small.’

Of the five rules, ‘by far the worst performing’ is the first, which relates the coordination number of atoms neighbouring a cation to the cation’s radius, says George. The second, which relates the charge of an anion to the charge of the connected cations, also performs ‘quite badly’. The third and fourth rules, which deal with the connections of coordination environments, ‘have an intermediate level of performance’, George adds. ‘The rule that works the best is the fifth – the rule of parsimony – stating that simpler structures are preferred.’

Anubhav Jain from Lawrence Berkeley National Laboratory in Berkeley, California, says that perhaps Pauling should have listed his rules backwards. ‘In particular, rules that try to minimise the overall electrostatic energy, as opposed to local electroneutrality or hard sphere interactions, seem to get an overall pass as they have a clear correlation to the overall crystal energy,’ he says.

The Louvain team will now try to update the rules using machine learning, George says. ‘This work might also ultimately show if Pauling’s intuition was correct that coordination environments and their connections are the adequate descriptors, or features, to predict the crystal structure of a material,’ she observes.