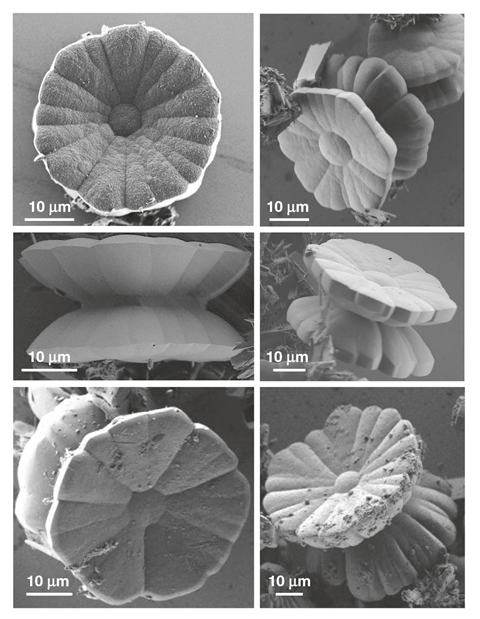 Yo-yo constructs produced from a simple chemical solution are a new type of crystal that have a particularly unusual structure.

The crystals are formed from two concave discs attached to a central axle. From the side, the discs look like flowers with clearly defined petals. These flowers have a slight spiralling arrangement, meaning that the yo-yos have a chiral structure. Despite their complex shape, they are single crystals – confirmed by x-ray crystallography.

The yo-yo crystals are made from achiral components – they’re grown from a solution of copper nitrate and a pyridine-based organic ligand. The mixture forms a continuous network, with four ligands making a propeller-like shape around each metal centre. The material initially forms achiral, cylindrical crystals. However, after aging these cylinders for two days, they spiral out forming the green yo-yo-like precipitate.

This helical structure means that the material possesses chirality at both the molecular and macroscopic levels. Each porous crystal is enantiopure, despite precipitating from a racemic mixture.

The crystal structures belong to the highly unusual P622 space group. The Cambridge Crystallographic database, which recently logged its one millionth structure, only contains seven other examples of P622 structures.