In situ with Molly Stevens 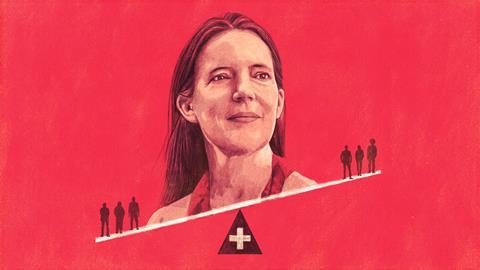 Molly Stevens is professor of Biomedical Materials and Regenerative Medicine in the Department of Materials and the Department of Bioengineering, and the research director for Biomedical Material Sciences at the Institute of Biomedical Engineering at Imperial College London, UK. Her work uses highly interdisciplinary approaches to drive improvements in biosensing and regenerative medicine, and has led to translation via spin-out, industrial and non-profit partnerships. In 2020, she was elected a Fellow of the Royal Society.

My first degree was in pharmacy. It was really appealing to me because it had so many different subjects in one. In a way, my preference would have been medicine, except I was put off by the idea of having to spend five years in a university. I thought that was too many years. It’s so ironic, because I’ve been in a university most of the time since.

After my degree, I worked in a lot of different areas in hospitals. And then I went travelling for an extended period, particularly in Southeast Asia. While I was travelling, I decided that I wanted to do a PhD, mainly as an intellectual challenge. I chose single molecule biophysics because it sounded really difficult. It was really fun – it was very fundamental. I learned an enormous amount.

At the end of my PhD, I had a strong motivation to work on something where I could see the outcome directly helping people. I went to a conference abroad that was a Millennium celebration that had many different topics in one conference. I walked past an open door and saw a very striking picture on the screen of this little boy that had a liver disease. I went in and Bob Langer was giving a talk. I thought it was so amazing that you can work on developing science from great scientific principles, and that it can be so applied towards helping people. The minute I saw his talk, I knew that I wanted to do a postdoc with him. And thankfully, he took me.

In my group, I have a combination of both fundamental and applied work. I still find it very interesting and motivating to look at the mechanisms behind the work we do, but I also like to see how we can marry those up with the end applications and push them forward. You can do both, though most groups choose one or the other. We all have a lot of opportunity to shape science in the directions that we’re most interested in.

Our society is tremendously unequal, and there really should be a lot more done to help with healthcare access across the globe. I think that engineering is one of the ways that we can help with that problem. Of course, many other sectors of society need to help too, coming at it from different directions.

Having travelled a lot myself in the developing world, I find it really rewarding that I can work on issues that could also impact poorer people within our populations. We are thinking about how we can use principles of bioengineering, materials science and chemistry to design new types of biosensing approaches that are not only really sensitive, but also able to work in more remote settings and at price points that can make sense for those settings. For example, we’re working a lot now with diagnostics that can be read by mobile phones. Even if people don’t have access to healthcare centres, they might have access to mobile phones, and that’s a way of enabling those people to get access to care.

I have an incredibly collaborative lab. We’ve got people from all over the world and from many different disciplines, so from surgeons, to chemists, to cell biologists, to engineers and physicists. I believe strongly in teamwork. By bringing those skill sets together, I can foster a very creative environment. I think it’s so important for people to feel enthused while they’re at work and to feel supported, and to feel that their colleagues are going to be friends for many, many years to come.

Having people in the group that are not only great scientists, but also wonderful human beings, is hugely motivating, and it’s what makes my job fantastic. Making sure that they do well once they leave the group as well is so enjoyable. It’s very different to producing papers, but I think just as important.

I am a very social person, and I also spend a lot of time with my three kids. Even though I live in the city I’m also a big outdoors person. I’m not at all materialistic. I love camping and hiking outside and things like that. I run multiple times a week, however busy I get it’s a constant in my life.