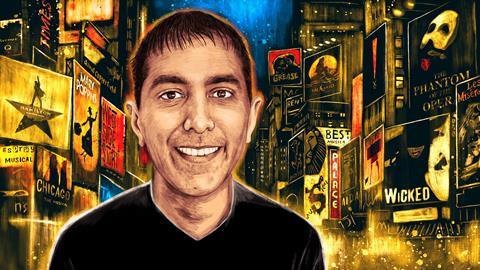 In situ with Neil Garg

Neil Garg holds the Kenneth N Trueblood endowed chair in chemistry and biochemistry at UCLA. Alongside his work on organic synthesis, he has developed a number of innovative ways to communicate research to students and the wider public. He was speaking to Katrina Krämer.

Neil Garg holds the Kenneth N Trueblood endowed chair in chemistry and biochemistry at UCLA. Alongside his work on organic synthesis, he has developed a number of innovative ways to communicate research to students and the wider public. He was speaking to Katrina Krämer.

The number of hobbies I have has steadily declined as I’ve had more children. I have four, including two three-year-olds, identical twins. I try to spend most of my free time with my kids.

I love to watch movies. I used to work at a Blockbuster video store many years ago, and my wife studied film. We always enjoy watching movies. Most recently, more than anything, I watched Game of Thrones.

I like to go hiking. I have two favourite trails in the Los Angeles area. One is Switzer Falls, and very close to that is a place called Mount Disappointment, which is not disappointing at all. Whoever discovered it thought they were climbing to the highest area and they brought all this camera gear to take photos. When they reached the top of this mountain they realised there was another point very close by that’s just slightly higher. Nowadays there’s a trail that connects the two peaks.

My family and I do all kinds of vacations, but I personally enjoy cities the most. For example, we did a trip to New York City and saw some Broadway shows, Hamilton and Wicked. I went to college in New York, so it’s always nice to go back there. Our other favourite place is Lake Tahoe.

I have too many favourite foods. I love barbecue, especially things like burgers or steak. On sabbatical in Texas, I developed a fondness for Texas barbecue and something called the Gut Pak, but it’s really not good for you, very meat- and fat-heavy. I also love tacos.

Growing up, I don’t know if I really knew what I wanted to be. I had a little bit of pressure from the family to become a medical doctor. Trying to accept that notion, I was interested in psychiatry. When I started college I took a psychology course. It was interesting, but I didn’t do so well academically. On the flipside, when I was taking chemistry classes I enjoyed them and I did well in them.

We typically rely on slides to present chemistry. We use a laser pointer, we’re constantly pointing to chemical structures and explaining the thought process behind what we’re doing. Giving a TEDx talk was a very different style: 20 minutes, 100% facing the audience. Your slides are just to accent the main talking points. It’s almost like a show compared to a lecture.

I’m not one of those people that has a specific routine for coming up with ideas. One of my biggest problems is my brain is always turning. I do a lot of thinking on planes, just staring out the window. And I hate to say it, but at conferences, especially during lectures. Some of the talks are really great and inspiring, and might prompt an idea. Then there are other times when the lectures are not so intriguing, and I’m not paying attention at all. Instead, I start doodling some of the things that we’re working on and try to come up with solutions to some of the problems that we have.

I think there’s an overall issue with scientific literacy or lack thereof. Organic chemistry has the reputation for being a scary subject, but I think most people don’t have any idea what it is. It’s a problem that has been around for a long time, and it’s up to us chemists to try to address that.

One of the major problems in society is the reputation of chemicals in general. It’s more often that you’ll see something negative about chemicals in the media than something positive. My kids and I wrote a colouring book that was prompted by one of them asking me if there were bad chemicals in our food. I was thinking ‘Where does a four-year-old get this impression that it would be a bad thing if there are chemicals in her food?’ To me these outreach projects are almost hobbies, but they also do something good for my field, and, hopefully, something good for society and the community at large.