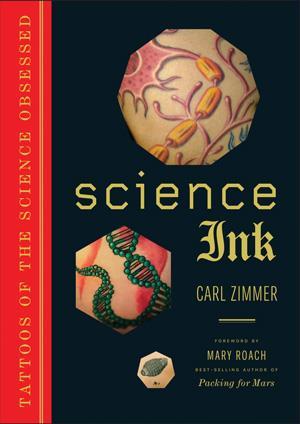 I admit, I was perhaps an obvious person to review this book. I have tattoos and enjoy finding out more about the science and safety behind them. The idea of a scientific tattoo has occurred to me in the past, but unlike the subjects of Carl Zimmer’s book my tattoos don’t relate to the little research I did, nor to my allegiance to the field of chemistry. If I’d taken the idea further, though, I myself might have featured amongst the scientific tattoos collected in Science ink.

Zimmer is honest from the outset that he has no tattoos himself. But, as he describes in his introduction, he noticed a couple of scientists who had scientific tattoos and wondered if it was a wider trend (which it is). After collecting submissions to his online blog and posting tattoo after tattoo, along with a short post about the person and their body art, Zimmer has now turned his archive into a book.

The book is split into thematic sections. The length of the text accompanying the photographs varies, but each story tells the reader something about what and who they are looking at. Of course, when I first received the book I made straight for the chemistry section, where I found plenty of chemical structure diagrams in a variety of styles. Perhaps inevitably, biological molecules predominate, but there are also huge organic molecules that took up somebody’s PhD study and the electron diffraction pattern of a titanium alloy.

Flicking through the pages, I kept being drawn from one story to the next. Before I knew it, hours had passed. This is a coffee table book but it easily draws you in. An image that meant so much to somebody that they got it permanently painted onto their skin: it’s that story that fascinates me. It might be a molecule from grad school, an equation, or, in one instance, a graph from a father’s paper on the skin of his son.

Science ink collects personal, permanent statements of what matters to scientists. Even if you might not choose the same medium, you will recognise the intent and might even learn something along the way.

Purchase Science ink: tattoos of the science obsessed from Amazon.co.uk