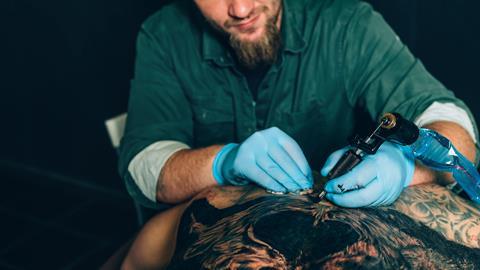 The European chemicals agency (Echa) has proposed restricting the use of some 4000 substances – some of them hazardous – found in tattoo inks and permanent make-up. Echa is also considering limiting the concentrations of some inks already in use. Some inks are already banned in cosmetics, or classified as carcinogens or skin sensitisers.

The proposals come in response to concerns that while more people are getting tattoos – as many as 24% of 18–35 year olds may have one – there is not enough data on the composition of inks and any impurities they contain, and no commonly accepted analytical methods to examine them. As it’s so difficult to assess exposure levels in people who’ve had tattoos, Echa says that ‘the only way to manage the risk in the case of receiving tattoos is to limit the presence of unwanted substances in tattoo inks’. It has worked on the assumption that any substance not considered safe for use on human skin, is not safe to be applied under the skin.

The Joint Research Council, Europe’s scientific advisory arm, identified polycyclic aromatic hydrocarbons, some of which are known carcinogens, primary aromatic amines and heavy metals in ink samples that were analysed. Primary aromatic amines are used to make azo colourants, which have replaced colourants based on toxic heavy metals, such as lead and mercury. According to the report, ‘this development coincides with an increase in reports of adverse reactions to tattoo inks and thus, poses a challenge for their regulation and risk assessment’.

The agency has proposed two restriction options for all the chemicals that are of concern, that vary in terms of the concentration limits of active ingredients, but which will prevent any substances exceeding the limits being put on the market, or being used. A centralised database is also proposed, which it says might address an ‘acute’ issue of counterfeiting of inks identified by some US manufacturers.