This month sees the UK's Diamond Light Source open its doors to bands of researchers eager to make the most of its synchrotron radiation. Susan Aldridge investigates what Diamond has to offer

This month sees the UK’s Diamond Light Source open its doors to bands of researchers eager to make the most of its synchrotron radiation. Susan Aldridge investigates what Diamond has to offer 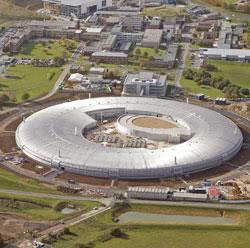 The UK’s biggest science investment for 30 years, the Diamond Light Source, opens this month on the Chilton/Harwell science campus in Oxfordshire and promises to bring huge benefits to the chemistry community, allowing the structure and dynamics of matter to be investigated in more detail than ever before.

Diamond produces extremely intense and high quality synchrotron radiation in the form of ultraviolet, visible, infrared and x-ray light, from the acceleration of electrons; put simply, the facility can be seen as a series of ’super-microscopes’ with applications in chemistry, materials, structural biology, food science, and environmental studies.

The UK Government has provided 86 per cent of the funding for Diamond through CCLRC (Council for the Central Laboratory of the Research Councils), and the Wellcome Trust has stumped up the rest; 40 per cent of the facility’s use will be for medical research. The Diamond project is also supported by an impressive infrastructure including a new Medical Research Council research complex for chemistry and life sciences and a membrane protein lab funded by the Wellcome Trust and run between Imperial College London and Oxford University. UK academic institutions take priority as Diamond users although EU scientists also have access under the EU Framework programme. Ten per cent of users will come from industry.

Under phase I, a ?260 million investment has paid for the buildings, the synchrotron and the first seven beamlines (experimental stations). A further ?120 million is dedicated to phase II of the project’s development, which will involve opening a further 15 beamlines.

UK prime minister Tony Blair visited Diamond shortly before its completion and spoke warmly about the investment: ’This new world-class facility shows the importance this country attaches to science and scientists. Our future prosperity rests more than ever on the hard work and genius of our scientists and how we harness their research to deliver improvements in all our lives. This is exactly what the Diamond Light Source will help us achieve in many fields, from developing new drugs to tackling climate change’.

The UK built the world’s first dedicated synchrotron in 1981, at the CCLRC Daresbury Laboratory in Cheshire. There are now around 50 other synchrotron facilities around the world.

Daresbury has been the location of much ground-breaking research, including the discovery of the structure of the foot and mouth virus.

In 1993, Diamond was conceived as a ’next generation’ synchrotron facility for Britain. The plan is for it eventually to replace the synchrotron source at Daresbury when the facility comes to the end of its natural life in 2008.

Research and development on Diamond began in 2002 and the project has come in on time and on budget. ’Our team has achieved so much since the company was formed in 2002,’ says Gerhard Materlik, Diamond’s chief executive officer. ’From five employees and the tough mission to build and bring Diamond online, our workforce now numbers around 270.’

Situated in Grenoble, France, the European Synchrotron Radiation Facility (ESRF) brings together 3500 researchers a year from 18 European countries. The UK contributes 14 per cent of the ESRF’s €74 million (?50 million) budget (2004 figures). Top contributors are France (27.5 per cent) and Germany (25.2 per cent).

Synchrotrons are divided into high, medium and low energy, depending upon the energy of the electrons in their storage rings: 6-8 GeV, 3 GeV and 1.5-2 GeV respectively. ESRF is high energy, Diamond medium, so experiments at the two facilities can complement one another. ESRF carries out research in many areas including life sciences, archaeology, nanomagnets, and metals.

Electrons travel at around the speed of light around the 561 metre storage ring which lies at the heart of Diamond; they are accelerated and focused by arrays of powerful magnets called insertion devices. These magnets generate extremely intense and exceptionally pin-pointed synchrotron light - at least 10,000 times brighter than that available at Daresbury, and 100 billion times brighter than a standard laboratory x-ray tube.

From the storage ring, the radiation enters one of the beamlines - a work station consisting of optics, experimental and control set-ups that allow specific research projects to be carried out with the synchrotron light. 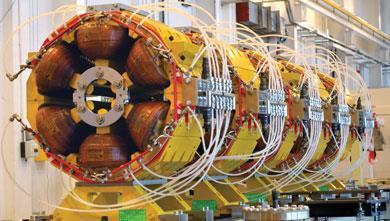 Each beamline is dedicated to a specific kind of work; multi-purpose stations involve complicated changes in optics between experiments. Beamlines will be added at a rate of two to four a year until an occupancy of 30 to 35 work stations is reached, although there is the capacity to host 40.

Three of the seven phase I beamlines are dedicated to macromolecular crystallography and will determine the structures of complex biological molecules - work of great relevance for the pharmaceutical, biotech and speciality chemical sectors.

The materials and magnetism beamline will look at the atomic structure of electronic and magnetic materials, again important for speciality chemicals, as well as for electronics, photonics and magnetic storage research.

There is also an extreme conditions beamline, where the behaviour of materials at very high temperature and under intense pressure can be investigated, generating knowledge for a range of industrial applications and geophysics.

In the microfocus spectroscopy beamline, sub-micron x-ray beams will be used to map elements and compounds within complex inhomogeneous materials, often through x-ray absorption spectroscopy.

Finally, the nanoscience beamline will image structures to resolutions of a few nanometres using x-ray photoelectron spectroscopy. This will help to develop sensors, catalysts, medical devices, optoelectronic, and electronic systems.

There is also a non-crystalline diffraction beamline, which is part of Phase II but which will be commissioned around the middle of this year; this will be used to study large complex structures such as viruses, polymers and colloids.

Nick Terrill, principal beamline scientist on the non-crystalline diffraction work station, is developing a range of techniques to investigate polymer surfaces, thin films, and colloids, with applications including food technology and environmental research. For example, he has been looking at ferric oxide particles that are produced in water treatment and act as sponges for cadmium, a powerful pollutant. ’The small angle beam allows you to see things that you could not on an electron microscope,’ he says. ’We are able to use more dilute samples and get more information with faster and fewer repeats.’ 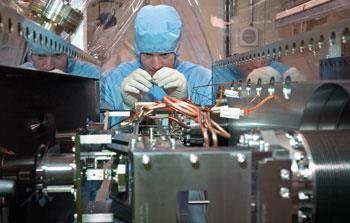 Meanwhile, Sofia Diaz-Moreno is the principal beamline scientist on the versatile x-ray absorption spectroscopy beamline, which gives very fast-recording spectra, allowing reactions to be followed in situ. ’We can look at any samples containing a heavy metal and are interested in following reactions in homogeneous and heterogeneous catalysis,’ she says. One application is in developing catalysts for car exhausts. These generally consist of a matrix with dispersed particles, rather than a crystal. ’We need to know the catalyst’s structure and how this changes with different exhaust gas compositions. This might lead to better methods of synthesis and fabrication,’ says Diaz-Moreno.

Trevor Rayment, professor of physical chemistry at Birmingham University, UK, has a long involvement in Diamond’s development and uses synchrotron radiation to look at processes in and at surfaces involving electron transfer. ’An x-ray beam just above the surface will show how electron transfer changes the structure of a molecule,’ he says.

One application is in the study of pitting corrosion, which can be very damaging. ’We are now starting to get a full and thorough understanding of the environment inside the pit, which has been lacking until now. We want to go on and build a model for the growth of the pit.’

Diamond is a huge investment, but as Materlik points out: ’Science is an investment in all our futures.’ Experiments at Diamond will add to basic science in chemistry, life science, nanotechnology, archaeology and engineering, he adds. ’We expect many high impact publications and there will be spin offs for academic and industrial groups, which the Diamond industrial committee can help bring forward’.

Or as Rayment puts it: ’Diamond is going to be the best facility in the world for structural chemists.’

Susan Aldridge is a freelance science writer based in London, UK.

Australia is the only advanced scientific and industrial nation in the world without its own synchrotron and the government has had to pay for researchers to use facilities in Japan or the US. But that is set to change when the Australian synchrotron opens this spring on the Monash University site in Victoria (see Chemistry World, September 2006, p14). Like Diamond, this is to be a medium energy facility and will serve the research and industrial needs of almost the whole Australian science community - around 1200 users.

The Australian synchrotron will complement lower energy facilities in Thailand, Taiwan and Singapore, which are better suited to research using ultraviolet and soft x-ray radiation. It is expected that reciprocal access arrangements will be made with these facilities. 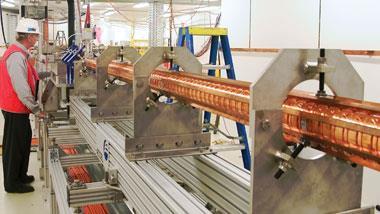 Australia is working towards opening its own synchrotron facility this spring

Scientists in New Zealand will also be closely involved with the Australian synchrotron. An initial 13 beamlines are being planned and there is capacity for up to 30. There will also be provision for remote access, because the Australia/NZ science community is widely spread geographically. Australia already has strength in protein crystallography, so this will be a major application, as will physics, chemistry, nanoscience, agriculture, oil and gas, minerals, and materials science.