Eric Chivian still sees patients. But how many of us can boast that our doctor has been named by Time Magazine  as one of the 100 most influential people in the world, was part of a group that received the 1985 Nobel peace prize, and has published three highly influential books used by policymakers, university students and the public?

Chivian’s mission over the past 18 years has been to involve doctors in efforts to protect the environment, and to increase public understanding of the potential human health consequences of global environmental change. Today he is assistant clinical professor of psychiatry and director of the center for health and the global environment at Harvard Medical School. 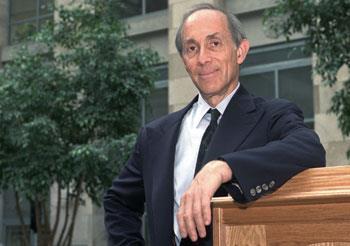 Chivian’s latest book, edited and written with colleague Aaron Bernstein and published in 2008, describes the urgent need to preserve biodiversity by documenting its importance to human health - not least as a vast repository of potential medicines. It attracted accolades from all over the world. Sustaining life: how human health depends on biodiversity, is the first book to examine the full range of potential threats that diminishing biodiversity poses to human health. It argues that our health depends on the health of other species and on the vitality of natural ecosystems.

You know a book carries weight when Kofi Annan, former secretary-general of the United Nations and Nobel peace prize laureate, pens the prologue: ’One of the main reasons the world faces a global environmental crisis is the belief that we human beings are somehow separate from the natural world in which we live... Sustaining life  challenges this widely held misconception by demonstrating definitively, with the best and most current scientific information available, that human health depends.on the health of other species and on the healthy functioning of natural ecosystems.’

Birth of a campaigner

Chivian has made a name for himself as a determined and passionate campaigner. But this aspect of his career still continues to surprise him. ’As a medical student, I never imagined that I would be so involved in the environment and with politics. But as a child of the 60s, I believed that whatever I set my mind to do, I could do. I followed opportunities that have occurred with no idea where they would lead.’

Forty years ago Chivian was starting his career as a doctor in the public health service in Washington, DC. It was here that he experienced events that set him on his own distinctive career path. At that time (1969-71), policymakers were debating whether the US should build a fleet of supersonic aeroplanes to rival Concorde. There were concerns that NOx in their exhausts could damage the ozone layer. Chivian went to hear his former professor Thomas Fitzpatrick, a world expert in malignant melanoma, give testimony to a Senate committee. He argued that a thinning ozone layer would lead to more cases of skin cancer.

This testimony effectively ended the project to build a supersonic fleet, remembers Chivian. ’I was so impressed by someone I knew turning around a matter of enormous importance on health grounds. That started me thinking that environmental issues were public health issues, and, as physicians, we are among the most powerful advocates for protecting the environment.’ So it was that Chivian began to think about organising doctors to educate the public, particularly about global changes.

After a time, his focus narrowed to nuclear issues and he helped to reform a group called Physicians for Social Responsibility. With uncanny timing, the group published an advertisement in the New England Journal of Medicine  outlining their concerns about nuclear power on the same day as the Three Mile Island nuclear accident. Within two weeks, their small group had become a national organisation with thousands of members.

The group reached international prominence in 1980, shortly after the Soviet Union invaded Afghanistan. Now called International Physicians for the Prevention of Nuclear War, it published an open letter to US President Carter and Soviet Chairman Brezhnev in the New York Times  describing the medical consequences of nuclear war. Chivian and his colleagues were invited to the White House and received a letter from Brezhnev. In 1985, the group received the Nobel peace prize.

During the 1980s, Chivian turned his attention to the environment as the threat of nuclear war diminished and the ozone hole in the Antarctic was discovered. ’We realised that global environment changes were "Armageddon in slow motion" - devastating over time, evolving incrementally over decades, perhaps centuries, but still affecting human health and life.’

Chivian, then working at MIT as a physician, attended the 1992 Rio Earth Summit, but was disappointed when the health impacts of global environmental changes were not discussed. Chivian’s group later produced a report for the UN’s Environment Programme (UNEP) on this subject and, in 1993, published a book: Critical condition: human health and the environment. 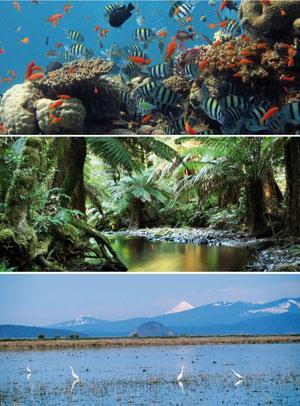 Chivian realised as early as 1992 that people were not as aware of the health impacts of biodiversity as they were of climate change, and this area became of great interest to him. ’Most discussions were about how burning or cutting down tropical rainforests was losing potential medicines. But I thought, what about medicines from other natural sources, such as sea creatures or microscopic organisms? I realised we needed to expand the discussion from the narrow subject of sourcing medicines. Biodiversity and human health was much larger than just medicines. It included infectious diseases, food supplies, and ecosystem services - wetlands, for example, filter water.’

In 1999, the chiefs of UNEP and the World Health Organization (WHO), Klaus T?pfer and Gro Harlem Brundtland, agreed that Chivian and his colleagues should organise scientists to write a report on the relationship between biodiversity and health, and this report became Sustaining life.

It was a mammoth task, says Chivian. ’It took seven years; it was such a huge topic. Every time we wrote something, a new set of papers were published; we were constantly updating, making sure that we covered as much as we could of the peer-reviewed literature.’ The result is a comprehensive review of how human medicines, biomedical research, the emergence and spread of infectious diseases, and the production of food on land and in the oceans, depend on biodiversity. Seven groups of organisms provide case studies to illustrate the contributions they have made to medicine, and those they are expected to make if they aren’t driven to extinction.

The authors wanted the book to be a resource for policymakers and the public, with everything defined and explained, as well as a textbook. But it was very difficult to get scientists and doctors to write in everyday language, Chivian recalls. ’We are in real trouble if scientists are worried but can’t communicate that to the general public. Most people find it hard to grasp the issues relating to biodiversity. Subtle alterations in the global environment seem remote and abstract. So it is important for people to understand these alterations in concrete and personal terms, in easy to understand language.’ Chivian believes that they have accomplished this in Sustaining life  , and it is this aspect of the book of which he is proudest.

But the book also contains a message for the pharmaceutical industry. It describes how 20-30 years ago big pharma started investing heavily in developing new drugs from natural resources. However, Chivian points out that now the focus is mostly on new drug development using combinatorial chemical approaches. While he acknowledges that there are many reasons for this shift, including tighter regulations on exploration and removing resources, as well as restrictions on patents and profit sharing, he urges big pharma to ’keep nature in mind’. 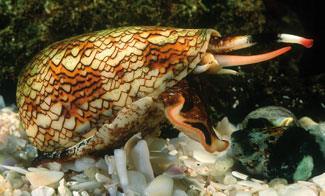 He continues: ’I know it is cleaner and easier for companies to design and make their own drugs, but nature has essentially been a combinatorial chemist for billions of years. Other organisms have to defend themselves against some of the same threats as we do, such as cancer. So we need to look at these compounds. Remember the ones that didn’t work are no longer around or have a different function - as those organisms didn’t survive. It is important to look at nature for clues.’

More than half of all prescription medicines in the US come from natural sources or are patented after compounds based on natural sources, he points out. For example, the cholesterol-lowering statins - the most widely used drug in the world - come from fungi and bacteria; aspirin came originally from willow tree bark; and the AIDS treatment ACT is derived from a marine sponge.

Sustaining life  is full of such examples. Take the pit viper. It produces a toxin in its bite that kills its victims by reducing blood pressure. Researchers isolated the precursor to the toxin and so developed ACE inhibitors, one of the most important groups of medicines for treating blood pressure as well as increasing understanding of the physiology of maintaining blood pressure.

A favourite example of Chivian’s is cone snails. These snails hunt by hiding in coral reefs and shooting out a thin tube whenever fish come near. If a fish tries to swallow the worm-like tube, the snail injects it with paralysing venom, rendering the fish powerless and ready to be eaten.

There are 700 species of cone snail, and each makes at least 100-200 distinct peptide toxins, which appear to bind to every known cell receptor site in the body. While only a hundred of these toxins and six species have been investigated in detail, they have generated 2500 papers on potential uses, and many clinical trials. 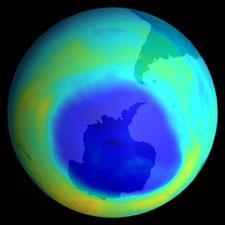 The ozone layer hole prompted Chivian’s focus on the environment

But cone snails’ coral reef habitat is threatened by global warming. ’If cone snails die,’ says Chivian, ’then we may lose one of the great sources of medicines in nature. This loss of biodiversity has a very real potential to affect human health.’

So far, research efforts have led to one drug on the market, a painkiller called Prialt (ziconotide), which, Chivian believes, could rival the opiates as painkillers. Prialt, made by Elan Pharmaceuticals, is based on the structure of a cone snail protein. When scientists began studying how the venom worked, they found that it could do more than paralyse. They discovered that one of its constituent peptides stopped some nerve cells from sending pain signals to the brain. Once scientists understood how the peptide blocked pain, they set to work on developing its synthetic equivalent. Elan claims Prialt is 100 times as potent as morphine as a painkiller, with the benefit that patients don’t go on to develop tolerance. Prialt’s downside is that it is has to be administered into the spinal fluid.

Cone snails are also threatened by people who collect them for their beautiful shells, and by researchers who are not careful of their collection. This raises another issue close to Chivian’s heart: resource exploitation. Some countries have very strict controls but other countries do not, for example, Indonesia. ’Harvesting of natural resources for human medicines or communal uses,’ says Chivian, ’has to be done very carefully and scientifically, and there should be a rapid push to identify the chemicals with biological activity so that synthetic versions can be made, so as not to strain natural resources.’

It was 17 years ago that the Rio Summit raised concerns about global warming. ’If political leaders had listened at that time the world today would be a different place,’ Chivian believes. In the meantime, he’s doing his best to make them listen now and remains convinced that health is the key to making environmental issues real for people.

Maria Burke is a freelance science writer based in St Albans, UK