Wandering through the Laboratory of Molecular Biology (LMB) in Cambridge, UK, it is easy to see how this lab, which is funded by the Medical Research Council (MRC), has produced so many Nobel laureates - fourteen in total, split evenly between chemistry and medicine or physiology. The place hums with activity and every corner is filled with experimental apparatus. I’m visiting the labs just a couple of days after the announcement of the 2009 Nobel for chemistry, shared by the LMB’s Venkatraman (’Venki’) Ramakrishnan; Thomas Steitz from Yale University, US; and Ada Yonath of the Weizmann Institute of Science in Rehovot, Israel; but it’s business as usual in the laboratories, with researchers patiently teasing out the intricate details of the machinery of life. 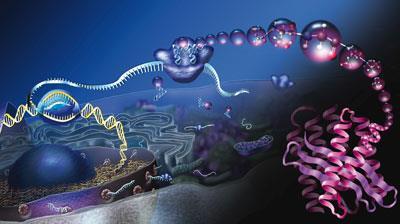 The three winners of this year’s SKr10 million (?880,000) prize are credited with pinning down the structure of ribosomes - the protein factories found in every cell that translate the four-letter genetic code of nucleic acids (DNA and RNA) into the 20 or so amino acid members of the protein alphabet . For this reason, Ramakrishnan explains, ribosomes have been of central importance in biology ever since their discovery in the 1950s. ’Virtually every molecule in the cell was either made by the ribosome or by enzymes that were themselves made by the ribosome,’ he says.

But Ramakrishnan is also quick to point out that, even though the action of the ribosome is centrally important to biologists, deciphering its structure and relating that to its function at a molecular level is just as much chemistry as biology. ’Underlying all of biology are molecules,’ he says, ’and those molecules follow chemical laws, so understanding how those molecules work becomes a chemical problem.’ And the ribosome is certainly no small problem - it has a molecular weight of 2.5 million Daltons and around a million individual atoms to pinpoint. Nearly two thirds of that mass is RNA, and the rest is a complex made up of around 50 individual proteins divided into two subunits, so it’s no real surprise that getting accurate structural data took nearly twenty years.

It was Yonath’s work that really laid the foundation for solving the structure of the ribosome. Shortly after the announcement of the prize, Yonath told the Nobel foundation that her inspiration came from thinking about hibernating polar bears. ’Because of a bicycle accident, I had some free time and I had to recover and I read a lot’ she said. She explained how bears pack away their ribosomes during hibernation to preserve them - otherwise they would degrade and there would be none left to make new proteins when the bears woke up in the spring - and how this picture of close-packed ribosomes inspired her to find ways of crystallising them while preserving their activity.

In the 1980s, Yonath’s group managed to get the first useful crystals of the larger subunit of the ribosome from very robust bacteria. These initial crystals were fragile and prone to damage from the x-rays used to probe their structure, but the group persisted and developed their crystallisation techniques to get better and better resolution x-ray images. One of the biggest breakthroughs at this time was Yonath’s use of cryo-crystallography - freezing crystals to protect them from damaging free radicals produced by x-rays.

But having good quality crystals was only part of the battle - there was still the issue of the so-called ’phase problem’, and this was where Steitz and Ramakrishnan came to the fore. To get enough information to build an accurate molecular map from an x-ray diffraction pattern, explains Ramakrishnan, you need to know both the intensity of the diffracted x-rays, but also their phase - where they sit in the pattern of peaks and troughs that makes up x-ray wave.

The so-called ’central dogma’ of biology, ’DNA makes RNA makes protein’, was formalised by Francis Crick in 1970. It describes how genetic information stored in the form of DNA is converted into functional molecules: ’RNA makes protein’ is where the ribosome comes in.

After DNA is transcribed into messenger RNA in the cell’s nucleus, the mRNA strand travels to the ribosome, where it is clamped between the two subunits, and read, three nucleotide bases at a time. As the ribosome ratchets its way along the mRNA strand, each set of three bases, or codon, is paired up with its complementary anti-codon on a transfer RNA that delivers the appropriate amino acid to the growing peptide chain. Once it reaches a stop signal on the mRNA, the peptide is released and the ribosome falls apart to free the mRNA and find a new one to translate.

Each ribosome can form 10 to 20 peptide bonds per second and has built-in error checking mechanisms to ensure that it only makes on average one mistake for every 100,000 amino acids added to a peptide chain. The whole process is orchestrated by a multitude of helper biomolecules that bind the ribosome at different stages of the cycle, and it is these that much of the current research on ribosomes is now focused on.

The traditional way of solving this problem, explains Ramakrishnan, is to incorporate heavy atoms that diffract x-rays in very defined ways, such as mercury, into the crystal and then compare the diffraction patterns with and without these heavy atoms. ’This technique of isomorphous replacement was originally used by Max Perutz and John Kendrew here at the LMB to solve the structures of haemoglobin and myoglobin, for which they received the 1962 Nobel prize for chemistry,’ he adds, ’but to begin with it wasn’t clear that this would work for the ribosome.’

Steitz and Ramakrishnan took slightly different approaches to solving the phase problem. Steitz looked at refining the heavy atom cluster techniques used by Yonath, and got the first really credible phase information for the larger subunit of the ribosome. On the other hand, Ramakrishnan focused on the smaller subunit and explored anomalous scattering - a new idea made possible by the advent of synchrotron radiation, which gave researchers access to tunable wavelengths of x-rays that would interact more specifically with lanthanides or other special atoms introduced into the crystals. ’We used heavy atoms to get going,’ says Ramakrishnan, ’and in the end [Steitz’s group] used anomalous scattering as well, so it all seemed to converge.’

With three groups working to solve the structures, there was inevitably an element of competition. Ramakrishnan describes the informal race between the groups working on the two different subunits in quite friendly terms, but he remembers 1999 to 2000 as a ’tense and actually rather unpleasant’ period when his own group was in almost direct competition with Yonath’s to solve the smaller subunit structure. He adds that it is important to make sure that competition doesn’t detract from scientific progress, saying ’My attitude was to stick to the science - I have some misgivings about these awards in general, because they can make people behave unprofessionally and cause divisions among people who really should be the best of friends and collaborators.’

The target of all targets

Because of its crucial role in the survival of cells, and the differences between bacterial and human versions, the ribosome is an important target for antibiotics. About half of all antibiotics discovered so far target the bacterial ribosome. In 2000, Steitz and Ramakrishnan teamed up with a group of colleagues, including Peter Moore and Harry Noller, to found spin-out company Rib-X Pharmaceuticals.

Susan Froshauer, a molecular geneticist who left Pfizer to head up Rib-X, told Chemistry World  how important the high-resolution structure of the ribosome is in the fight to overcome antibiotic resistance in bacteria. ’We call the ribosome the target of all targets,’ says Froshauer, ’and the crystal structure provides us with a wealth of three-dimensional chemistry to help us understand where known antibiotic classes act on the ribosome, and then to design something new that would be more active against drug-resistant ribosomes.’ Rib-X is developing a new oxazolidinone antibiotic, radezolid, which is currently performing well in Phase II clinical trials, she adds.

This is the second time in three years that the chemistry Nobel has been awarded for the crystallography of a protein molecule. Roger Kornberg, who won the 2006 prize for his work on the structure and function of RNA polymerase - the enzyme responsible for transcribing DNA into RNA - told Chemistry World  that this year’s award only serves to further underline the importance of chemistry as the basis for biology. ’It calls attention to the importance of structure for understanding both chemistry and biology - particularly atomic structure,’ he says.

Kornberg also recognises that the work done by this year’s winners, particularly Yonath, is not just relevant to the ribosome. ’Yonath undertook this long before anyone believed it was feasible, and the contributions she made are important for the technical basis of their work, ours and what many other people do today.’ He adds that it was Yonath who recommended to him the appropriate heavy atom clusters to use to solve the structure of RNA polymerase.

On the shoulders of giants

Since the number of winners for any Nobel is limited to three, there are many researchers who have made seminal contributions to our understanding of the ribosome who might be considered to have missed out. In a press conference shortly after the prize announcement, Steitz was quick to laud the work of his long-time collaborator at Yale, Peter Moore. Ramakrishnan points to a series of lower resolution ’snapshot’ structures produced by Harry Noller from the University of California, Santa Cruz; and the cryo-electron microscopy work of Joachim Frank from the Wadsworth centre in Albany, New York, which helped to visualise how the ribosome changes shape as it works.

Both Ramakrishnan and Kornberg also point out that technological advances played a large part in their success - and Ramakrishnan notes how fitting it is that Willard Boyle and George Smith of Bell Laboratories in New Jersey received the 2009 physics Nobel for their invention of the charge-coupled device (CCD) sensor, as it was this that really pushed the power of x-ray detection, allowing data to be collected digitally and making it much easier to analyse and visualise such complex structures.