Asymmetric aldol reactions play a crucial role in the drive to create synthetic versions of biologically active natural compounds. Chemists are using the reactions - which create carbon-carbon bonds with tight stereochemical control - to synthesise complex biomolecules, many of which have potential as new drugs, and to reach a deeper understanding of biosynthetic pathways.

The aldol reaction fits in easily with nature’s chemistry. As John Cornforth, winner of the Nobel prize for chemistry in 1975 for his work on asymmetry and enzyme action, said: ’Nature, it seems, is an organic chemist having some predilection for the aldol and related condensations.’ 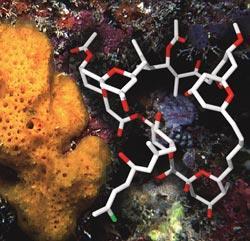 Reactants such as alkali-metal, silicon, and boron enolates and new types of catalyst, including transition metal and enzyme catalysts, have led to more stereospecific ways of carrying out the aldol reaction and hence to an increase in the number of applications, particularly in natural product chemistry. For example, the reaction has been used to synthesise carbohydrates, the antibiotic erythromycin, and the anticancer drug epothilone.

-carbon reacts reversibly with the carbonyl carbon of another aldehyde or ketone to give an aldol or ketol. An aldehyde or ketone can react with itself or, alternatively, two different carbonyl compounds can be used in a crossed reaction that tends to give a mixture of four possible products.

In an aldol condensation, the initial aldol adduct loses water to form an

-unsaturated ketone or aldehyde. The intramolecular aldol condensation of dialdehydes, ketoaldehydes and diketones can be used to synthesise five, six and seven membered rings. A famous example is its use in Robert Woodward’s total synthesis of cholesterol in 1952.

The intramolecular aldol condensation is also an important step in the biomimetic synthesis of polyketides, which occur in a wide range of organisms including bacteria, fungi and plants. The compounds often have desirable pharmaceutical or agrochemical properties and are playing an increasingly important role in medicinal chemistry.

All aldol reactions are potentially stereogenic; that is, with certain combinations of enol or enolate and carbonyl they will create two asymmetric (or chiral) centres in the products. ’The aldol reaction, above all others, is the one where you will tend to obtain the greatest number of asymmetric centres in the products,’ comments Rainer Mahrwald, of Humboldt University, Berlin, Germany, and editor of Modern aldol reactions. ’In former times, this was a big limitation because of the number of isomers obtained. But with new methodologies, stereochemistry can now be planned and predicted. With this selectivity, the aldol reaction has now become one of the most productive in organic and natural product chemistry.’

Modern synthetic chemistry, particularly in pharmaceutical applications, frequently requires enantiomeric purity. Asymmetric aldol synthesis was made possible by the introduction of pre-formed enolates (rather than those generated in situ in the classical aldol reaction) in the 1970s. These are generated by the reaction of lithium diisopropylamide and related soluble, strong, nucleophilic bases, with the enolisable component in an irreversible reaction that also allows useful control of regioselectivity in the enolate product.

This was followed by methods for making magnesium, sodium, lithium, boron, tin, titanium, and zirconium enolates. Lithium and magnesium enolates in particular are highly reactive and can be added to aldehydes at low temperatures; they have found widespread application because they are easy to handle and can be used on a large scale.

The stereochemistry of the aldol reaction depends on which enolate reactant isomer is used. In general, E enolates lead to anti stereochemistry in an aldol product and Z lead to syn aldols, although the actual ratio depends upon the nature of the enolate substituents.

Aldolases are a group of enzymes used in nature to form carbon-carbon bonds. Several of these are now commercially available on a scale large enough for preparative chemistry and they are being applied increasingly as chiral catalysts for in vitro synthesis of asymmetric compounds. They have the advantage of reacting under mild conditions, which often allows a synthesis to be simplified by eliminating the need for protection and deprotection of functional groups.

Moreover, as the trend towards green chemistry grows, the aldolases are finding favour as environmentally benign alternatives to chiral transition metal catalysts for aldol reactions. For example, dihydroxyacetone phosphate (DHAP) aldolase has proved a particularly useful tool for generating two different asymmetric centres at the termini of new carbon-carbon bonds. There are four unique aldolases of this kind, complementary to one another with respect to the stereochemistry around the carbon-carbon bond in the product. From one aldehyde substrate, a set of four possible diastereomeric products is available. Moreover, DHAP has a rather wide substrate specificity and has been used to generate libraries of monosaccharide and related compounds for bioactivity screening. Meanwhile, a better understanding of the structure and function of aldolases is leading to the design of engineered enzymes with improved properties and catalytic performance.

Antibodies, many of which are aldolase antibodies, are also being used as biocatalysts in aldol reactions. Immunising animals with substrates such as diketones has generated a number of catalytic antibodies whose substrate specificities differ from those of enzymes, thereby extending the potential range of aldol reactions. These antibodies have been used in pro-drug activation studies in cancer therapy and to synthesise complex natural products such as the pesticides frontalin and brevicomin.

The aldol reaction is especially relevant to natural product chemistry, where the new reagents and techniques can determine the stereochemistry around individual atoms in a complex molecule.

The reaction’s selectivity has taken it into the field of glycobiology. David MacMillan at the California Institute of Technology, US, has used the reaction to develop a two-step synthesis of three different hexose monosaccharides with high stereochemical purity. The molecules can modify the function of a protein and play an important role in many biological processes such as cell signalling and immunity.

The Mukaiyama aldol addition can be used to help synthesise carbohydrates

The difficulty of the stereospecific synthesis of the compounds had long hampered their study. ’We were interested in carrying out an aldol reaction between two aldehydes - something that had been talked about since about 1969 but not really advanced,’ says MacMillan. ’We knew that lots of bioactive molecules are made of chains of repeating aldehyde units so this would be a rapid way of building this kind of bioarchitecture.’

The first step in MacMillan’s hexose synthesis involves the stereoselective aldol dimerisation of a protected  a -oxyaldehyde, catalysed by the amino acid l-proline. ’We wanted to use organocatalysis instead of transition metal catalysis and proline proved a good choice because the products do not undergo further aldol reactions.’

In the second step, the product undergoes a Mukaiyama aldol reaction with an enol silane to give an isomer of glucose where each oxygen atom in the ring has defined stereochemistry. Similar reaction schemes allowed highly stereospecific syntheses of mannose and allose.

Glycobiology groups in both academia and industry are already using MacMillan’s new reaction. ’Our reaction can dramatically accelerate the production of complex molecules,’ he concludes.

Asymmetric aldol reactions are also being used to synthesise and study potential new anticancer agents. ’The most important natural product application of the aldol reaction today is probably to the polyketides found in marine organisms, such as sponges,’ says Mahrwald.

Until now, the lack of a realistic synthetic route has limited the pharmaceutical development of these compounds. But Ian Paterson and his group at Cambridge University, UK, are investigating the synthesis of complex sponge molecules such as dictyostatin, which has a similar mechanism of action to Taxol, a widely used cancer therapy.

’In our laboratory we have used asymmetric aldol reactions to design and complete short and efficient synthetic routes to a variety of biologically active natural products, particularly those that are promising anticancer agents isolated from marine sponges, such as discodermolide, dictyostatin and spongistatin,’ says Paterson.

’During this work, we developed highly successful new methods based on the boron-mediated aldol reaction to control stereochemistry as the carbon and oxygen skeleton of the target molecule is assembled. Such a reliable and systematic approach is generally useful for the synthesis of many complex natural products and analogues.’

He adds that useful as the aldol reaction has proved, there is still plenty of scope to improve it further - to make it easier to use, especially on an industrial scale.

Meanwhile, aldol reactions have also been used to synthesise epothilones, a class of macrocylic compounds with anticancer activity, also similar to that of Taxol.

The search for Taxol alternatives is being driven by the drug’s less than optimal properties - low solubility, necessitating the use of a formulation vehicle, and the emergence of resistance.

Epothilones come from myxo bacteria, which are a rich source of diverse natural products. The compounds exhibit cytotoxicity in cancer cells by interfering with their ability to divide and replicate. ’The most efficient way of making epothilones with the right stereochemistry is to employ aldol reactions,’ says Mahrwald.

The first total synthesis of Epothilone A was published by Samuel Danishefsky at Columbia University, US, in 1996, shortly followed by independent routes from K C Nicolaou at the Scripps Research Institute in La Jolla, California, US, and Dieter Schinzer at the Technical University of Braunschweig, Germany. All three syntheses involved different asymmetric aldol reactions to make highly stereospecific carbon atoms within this complex molecule.

It would seem that nature’s predilection for the aldol reaction is making it hugely valuable to today’s natural product chemists.

Susan Aldridge is a science writer based in London, UK

A major advance in the area of asymmetric aldol reactions came in the 1970s from Teruaki Mukaiyama, one of Japan’s leading organic chemists and a pioneer in the field. He is now an emeritus professor of chemistry at the University of Tokyo.

In the eponymous aldol addition reaction, a silyl enol ether is used instead of a conventional enol and the reaction is catalysed by a Lewis acid such as titanium tetrachloride. The trimethylsilyl (TMS) group acts as a sterically demanding hydrogen equivalent that can activate the enol and trap the aldol hydroxyl, thus controlling the stereochemistry of this centre.

Whether the products are syn or anti depends on the size of the substituents and on the nature of the Lewis acid.