Curiosity to take off

When Nasa's latest Mars rover is launched into space later this year, it'll carry the most advanced analytical instruments ever sent to the planet. David Pittman reports

When Nasa’s latest Mars rover is launched into space later this year, it’ll carry the most advanced analytical instruments ever sent to the planet. David Pittman reports 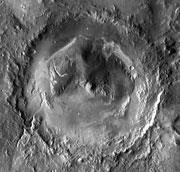 Curiosity will land in the 96 mile wide Gale crater, suspected to have held water at one point

Designing analytical instruments for space exploration takes lateral thinking to a whole new level. They must be able to withstand the shock and vibration of launch and landing, operate consistently under freezing and low atmospheric pressure conditions, and above all be small and light.

It is hardly a surprise then that Nasa has spent nearly $2.5 billion (?1.6 billion) designing the latest Mars rover, due to launch between 25 November and 18 December this year. This rover - officially named the Mars Science Laboratory, but better known as Curiosity - will carry out the most comprehensive look at Earth’s neighbour to date when it lands on the planet in August 2012.

When fully operational, Curiosity will be able to examine a Martian rock and study its mineralogy, its elemental and isotopic composition. It may even be able to answer the big question - were conditions that could support microbial life ever present on the planet?

Nasa has sent six rovers to Mars on scientific missions since the 1970s, but none has been as advanced as Curiosity. The science robot carries a dozen different imagers, remote sensors and spectrometers - packing 84kg of science payload onto its Mini Cooper-sized frame. Previous rovers fitted on much smaller frames, carrying around 7kg of analytical instruments.

Curiosity is also the first rover able to bring samples of rocks and soil into its body for further analysis. Past Nasa rovers were only able to take pictures, and carry out spectroscopy, from afar.

The most recent rovers, Opportunity and Spirit, both launched in 2003, carried an  a -particle x-ray spectrometer (APXS) and various other cameras and imagers. Curiosity holds the same, but improves on the APXS’s detection and adds for the first time an x-ray diffraction/x-ray fluorescence (XRD/XRF) instrument, a gas chromatograph-quadrupole mass spectrometer (GC-MS) and laser-induced breakdown spectrometer (LIBS). ’All three of those components together make for something that’s going to be very, very complex to use on the surface of Mars. It really makes this mission much more like a mobile laboratory,’ says Nasa’s John Grotzinger, head of Curiosity’s science components (based at the Nasa Jet Propulsion Laboratory in Pasadena, US). ’They provide you with all the same approaches that we would normally use to analyse rocks here on Earth.’

’The [earlier Mars rovers] were kind of like field geologists,’ explains David Blake of Nasa’s Ames Research Center (Moffett Field, US) and head of the team that designed the XRD/XRF instrument. ’The Mars Science Laboratory is like a field geologist carrying around its own analytical laboratory.’

Curiosity, as with previous Mars rovers, will be controlled by Nasa scientists on Earth. It will be programmed in advance with a set of actions rather than joysticked live, owing to the the radio delay between Mars and Earth. Grotzinger’s team will programme a day’s worth of work for Curiosity and send it to the robot each morning, after reviewing data it radioed back from the previous day. 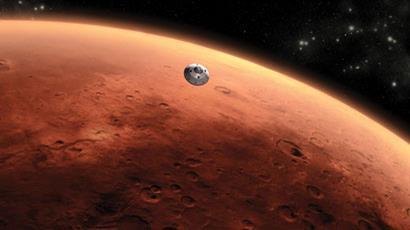 The seventh Mars rover should land on the planet next August

A potential area of interest will be initially selected using onboard cameras and satellite images, and the rover driven closer. The rock will then be blasted with a pulsed laser to vaporise samples for LIBS analysis. The laser ’can briefly pack the energy of a million light bulbs into a spot the size of a pinhead’, says Roger Wiens of the US Los Alamos National Laboratory and head of the LIBS design team. The atoms hit by the laser beam first reach an excited state, then relax and emit light that’s collected by a small telescope and fed into a spectrometer. ’With the calibration of that data, we can determine the abundance of the different elements present,’ Wiens says. Knowledge of the rock’s elemental composition will allow scientists to quickly assess if an area warrants further investigation.

The LIBS instrument, dubbed ChemCam for the mission, is arguably the most exciting machine onboard the rover. It can analyse samples up to 7m away, allowing it to study a much larger number of samples than could possibly be assessed by the other instruments onboard. ChemCam can also analyse lighter elements, including hydrogen, than any of the instruments on previous rovers. Evidence of hydrogen, of course, could mean water was once present. 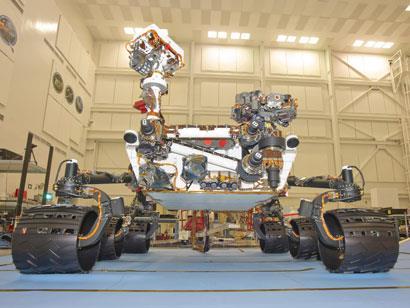 Additionally, because the LIBS technique can analyse spots less than half a millimetre wide, it can study the fine features of rock coatings; determining how thick the coatings are, their composition and how they handle the atmosphere on Mars. Curiosity can also use the same laser to tunnel away at various layers of rocks to take a deeper look inside if required.

Once a scientifically interesting area has been identified using LIBS, Curiosity will be moved closer. Its robotic arm will be extended and the rock measured with APXS. The device blasts the rock with  a  -particles in situ, and maps the spectra of x-rays that are emitted. This provides extra elemental composition information about the sample’s salt-forming elements.

If the data reveals more investigation is warranted, the rover can drill into the rock and extract a powdered sample. The sample will be brought inside Curiosity and divided in two. The first half will be analysed with CheMin (the mission’s name for the XRD/XRF instrument) to obtain mineralogy information. CheMin will be able to identify and quantify the minerals in rocks and soils. Finding hydrated minerals will be particularly exciting as it would suggest that habitable conditions once existed. ’If you know the minerals present there, then you know the conditions under which they were formed,’ explains Blake.

The second half of the powdered sample will be assessed using GC-MS, to obtain the compositions of organic compounds at the parts per million level and isotope ratios of key elements. Isotope ratios will provide clues to understanding the history of Mars’s atmosphere and water. ’There’s a whole series of isotope measurements [we want to take] that may tell us something about the history of the atmosphere and how the climate might have changed from an earlier, perhaps heavier atmosphere, to what it is now: very thin and the surface is very cold,’ explains Paul Mahaffy, chief of planetary environments at Nasa’s Goddard Space Flight Center, Greenbelt, US.

While that’s happening, ChemCam and the rover’s other imagers will be constantly looking at surrounding areas for its next potential target. 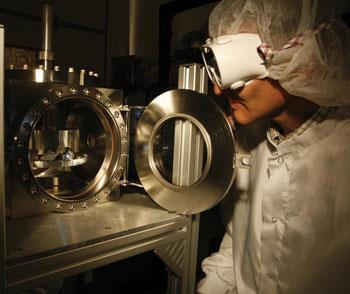 And the science doesn’t stop there for Curiosity. Multiple cameras will provide the most detailed high resolution pictures of the Martian surface to date. A radiation detector will assess the  cosmic rays and radiation on the planet. Other sensors will detect Mars’s surface wind, air and ground temperature and humidity.

Curiosity, while twice as long and five times as heavy as past Mars rovers, still couldn’t fit the various instruments on board without them being shrunk to fit. And compacting down these highly complicated machines may be one of the most impressive parts of this mission so far.

Grotzinger estimates that if standard sized instruments were placed in a typical academic lab, with students and postdocs to handle the samples, three or four rooms would be needed to hold the equipment. Instead, it is all packed on the body the size of a small car.

Blake first started work on miniaturising an x-ray diffraction instrument in 1989, and after more than two decades of developments it has been shrunk from a machine the size of an American fridge into 25cm3. This portable machine has also been used for more down to earth purposes such as searching for natural gas on Earth and identifying fake drugs (see Beyond Terra firma, Chemistry World, March 2010, p50; linked below).

Mahaffy’s team also spent several years cramming all the GC-MS components - which includes 54 valves, two pumps for each helium tank for the GC, six chromatograph columns and hundreds of metres of wiring - into a microwave-sized box. Effectively squashing it to a quarter the size of a typical instrument in an academic lab.

Curiosity offers Nasa scientists the ability to obtain significantly more scientific information about Mars than ever before - meaning the mission has potential to uncover many of the planet’s secrets.

’By going to the field with a quantitative instrument, you can change the direction of your observation and investigation on the spot,’ Blake says. ’If you discover that it’s not really what you think it is, you can start doing something different right there.’

With all the gadgets working together, Nasa scientists will be searching for signs of a habitable environment for life: water, energy and carbon. Microbes need the water and energy for metabolism and the carbon to build life forms as we know it.

The 96 mile wide Gale crater near the Martian equator has been selected as Curiosity’s landing site because satellite data shows the shape and makeup of minerals and rocks strongly suggest water was present there at one point.

’We know that sunlight reaches the surface, we know that there is chemical energy present in the forms of the minerals we see from orbit, so really the one outstanding question is whether or not we’ll find evidence of organic carbon,’ Grotzinger says. ’That’s a very tall order.’

But the reasons for picking Gale crater - the high chances of finding signs of water in the past - may also make it difficult to discover evidence of past life. The water can provide an oxidant to dissolve organic matter that may have once existed. Signs of life may not be preserved in the rock record.

Additionally, during the mission Nasa will gain data about the Martian water and sulfur cycles that’s never been taken before. Nasa and its scientists hope to collect data for approximately two years.

While Nasa works to bring Martian rocks back to Earth on missions later this decade, Curiosity still represents the furthest advancement to learn more about the possible signs of life on our closest neighbour.

David Pittman is a science writer based in Washington, DC, US