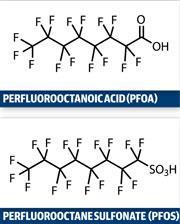 Most of us probably have trace levels of manmade fluorinated chemicals in our bloodstream. In the past decade, chemist Scott Mabury has identified fluorinated compounds just about everywhere he has looked, from Arctic polar bears to human blood samples from around the globe. He is now working hard to build understanding of reactive intermediates that form in the body when we breathe in or ingest particular fluorochemicals. ’We think the reactive intermediates may have biological activity that could be important,’ he explains.

Fluorinated chemical production continues to increase as consumers and industry the world over clamour for the performance characteristics that they provide, thanks to their incredible stability and liquid repellency. You can bet your bottom dollar that the best non-stick, non-stain products in your home contain fluorochemicals.

They are both so ubiquitous that in Mabury’s lab, at the University of Toronto in Canada, background levels of fluorinated compounds were making accurate measurement of trace chemicals nigh on impossible. ’We had a real problem with contamination,’ he recalls. Paper products were some of the worst offenders. ’There’s no reason in my view to have the little white cardboard boxes that hold lab supplies coated with a very expensive fluorinated surfactant, and yet we get very high signals from those,’ says Mabury. When he realised that even ’clean’ pipette tips were contaminated there was only one solution, albeit an expensive one - a C$1.3 million (?830,000) clean lab.

Mabury’s team needed the clean lab rather urgently. The researchers had just got their hands on over 400 blood samples spanning three decades from the German Environmental Specimen Bank. Every year since 1981 the bank had taken blood samples from 10 people in two locations in what was East and West Germany. Mabury needed to be able to measure minute concentrations of fluorochemicals and so armed the lab with an ultra performance liquid chromatography-tandem mass spectrometry system.

Fluorinated chemicals in packaging materials can migrate into food

The diesters - diPAPs - are thought to break down in the body or in microbes to form perfluorinated carboxylic acids (PFCAs), including the well-known perfluorooctanoic acid (PFOA), an eight chain carbon compound used to make a range of fluoropolymers. Together with perfluorooctane sulfonate (PFOS; once used in 3M’s Scotchgard stain protector), PFOA has long been a focus of regulators because of health concerns. PFOS and PFOA do not break down in the environment and have a tendency to bioaccumulate in animals including humans. Researchers have measured similar levels of PFCAs and perfluorosulfonates in human blood samples from North America, Europe and Australia. 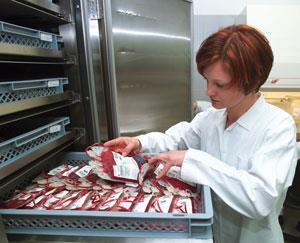 PFCAs composed of chains eight or more carbons long tend to be more bioaccumulative than those with seven or fewer. In tests on rodents, PFOA increased the incidence of hepatic, pancreatic and testicular tumours. High blood levels of PFOA and PFOS are suspected to be related to thyroid disease and higher cholesterol levels in humans.

It is still difficult to say for sure what the health effects of exposure to high concentrations of the compounds are. Indeed, investigations of people exposed to high levels of PFOS and PFOA through their work have given inconsistent results.

’It is going to take a while before we accumulate the evidence that will allow us to determine whether there are significant health effects associated with these materials,’ says Andrew Lindstrom, a research physical scientist at the US Environmental Protection Agency (EPA). ’The fact is that the materials are present in ng/ml concentrations in almost all of the world. The half-lives of these materials are generally very long - years. If there is any toxicity associated with them that is potentially a significant concern.’ The EPA has issued provisional limits for PFOS and PFOA in drinking water of 200ng/l and 400ng/l respectively.

In 2002, US chemical company 3M fully phased-out production of PFOS. And in 2009, the compound and its precursors were listed as persistent organic pollutants under the Stockholm Convention, a global environmental treaty tackling these compounds. 3M is also one of eight US firms to sign up to the 2006 EPA Stewardship program, which is aiming to eliminate PFOA and its precursors from emissions and products by 2015. Another signatory is US company DuPont, which produces the non-stick Teflon product range and uses PFOA to make some of its fluoropolymer products. 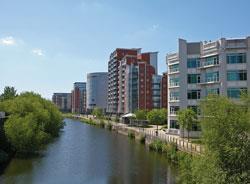 Fluorochemical levels in the Aire river, near Leeds, UK, have been monitored

If fluorochemicals such as PFOS and PFOA are released during the manufacture of these products they can be transported through water systems. Meanwhile, their volatile precursors - such as alcohols - can travel in the atmosphere before degrading elsewhere to form the acids. (This acid formation can even happen when precursors metabolise in the body.) Researchers in the field still dispute whether most environmental contamination comes from direct acid release or whether the acids predominantly form from the breakdown of other compounds.

PFOS and PFOA are very happy in water. In a project sponsored by the UK Department for the Environment, Food and Rural Affairs, Andrew Sweetman, a chemist at Lancaster University, has studied PFOS levels in both the Aire and the Calder rivers. ’The story for both rivers is the same,’ he says. ’You start with very low levels upriver then as you pass through cities, such as Leeds, concentrations increase.’

Sweetman is particularly interested in what happens to fluorinated compounds when they pass through sewage works. ’There is some suggestion that there is a large pool of polymer out there which may be degrading to form PFOS during the sewage treatment process,’ he says. He intends to study this next. ’If anything is partitioning to sewage sludge we need to know that as well,’ he says. ’There’s a good reason to know what is in the sludge: in the UK over 60% of sewage sludge is used in agriculture as a fertiliser.’

Gang Pan from the Chinese Academy of Sciences in Beijing has also monitored the compounds in water systems. In a recent study of Lake Taihu, one of China’s largest lakes used for drinking water, he identified relatively low levels of both short chain PFCAs and PFOS, with total perfluorinated chemical concentrations of up to 299ng/l. The PFOS and PFOA levels are low, he explains, because the lake effectively cleans itself when the fluorinated compounds adsorb on to particles in the water. 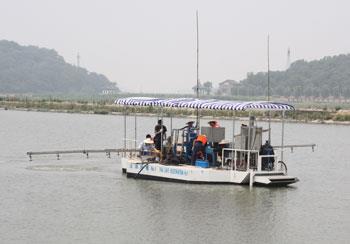 Pan has also found that PFOS is far more likely to adsorb to sediments in salty water than in fresh water. In a 2010 study of the Yangtze river, he saw a ’striking’ difference between PFOS levels in the river and in its estuary. In the freshwater parts of the river, PFOS levels were relatively high in the water but low in sediment. This reversed in the estuary area of the river, where PFOS levels became low in the water but high in sediment, explains Pan.