Scientists at the Centre for Science at Extreme Conditions in Edinburgh, UK, are subjecting crystals to immense pressures, with surprising results. Simon Hadlington reports

Scientists at the Centre for Science at Extreme Conditions in Edinburgh, UK, are subjecting crystals to immense pressures, with surprising results. Simon Hadlington reports

Crystallography is one of the cornerstones of modern science and crystallographers have been at the heart of some of the most important discoveries in molecular chemistry. Now, researchers in the school of chemistry at the University of Edinburgh, UK, are taking the technique into uncharted waters to observe previously unseen phenomena.

Simon Parsons, Colin Pulham and David Allan practise extreme crystallography. They are investigating what happens to crystals when they are subjected to massive pressures - up to 100000 times atmospheric pressure. Their discoveries have wide-ranging implications, from shedding light on how biological molecules can function under huge pressures in the deep oceans to understanding how different crystal forms of pharmaceutically active compounds convert between each other. 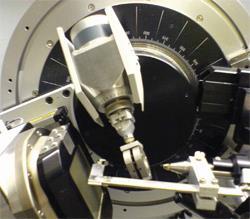 High pressure places strain on a crystal structure to the point where its supramolecular configuration becomes thermodynamically unsustainable, inducing a phase change to a more stable configuration. This structural rearrangement causes a polymorph - a crystallographically distinct form of the same compound - to form. The research team, based at the Centre for Science at Extreme Conditions, is discovering a range of novel polymorphs in a variety of molecular systems.

Diamonds are for pressure

The team borrowed its key piece of apparatus from Earth science, where it has been used for over 30 years to study the effects of pressure on minerals. The cell consists of two diamond faces positioned either side of a hole - which contains the sample - drilled in a tungsten gasket. The hole is around 0.2 mm across and of a similar depth. A screw-operated clamp forces the diamonds towards each other, inducing pressures of up to 10 GPa (around 100000 atm) within the cell. The apparatus can be mounted on a standard x-ray diffractometer, as well as on other instruments such as spectroscopes.

Crystals of samples that are solid at room temperature can be placed directly into the cell. Liquid samples, however, require a more delicate treatment. First, the pressure is raised until the sample ’freezes’. This polycrystalline phase can then be warmed gently until only one tiny crystallite remains. On cooling back to room temperature, a single crystal grows to fill the whole cell (see fig, below).

The team has developed a new process for looking at compounds that are soluble in common solvents such as water, alcohols, and chlorocarbons. Compressing the solution first forms a polycrystalline precipitate, then nucleation around a single crystal.

This method, which is essentially recrystallisation from a solvent under conditions of high pressure, extends greatly the opportunities for discovering not only new polymorphs but also new solvates - materials in which the solvent crystallises with the solute. ’With these three combinations we can cover almost the whole range of molecular crystals,’ says Allan.

The group’s research has strayed into biology, with a study of how pressure affects single crystals of amino acids. These already have well-characterised crystal structures, giving a good grounding to the work.

Because certain organisms live in deep sea trenches under high pressures, the effects of pressure could have significant biological relevance. As Parsons explains: ’Biologists are keen to understand how some proteins can retain their function under such conditions while others denature. Interactions such as hydrogen bonding are crucial for the structure and function of proteins and we wanted to understand how they respond to high pressures.’

Little experimental work had been done on compressing amino acids, but the researchers suspected that high pressure would shorten hydrogen bonds throughout the structure.

Parsons and his team subjected a range of single-crystal amino acids to pressures of up to 10 GPa and demonstrated that in fact pressure principally impinges on the voids within the crystal lattice. As the pressure increases, the voids become smaller. Where hydrogen bonds span the voids, some are shortened but others in the structure may stay the same or even lengthen.

Parsons explains why this happens: ’Within the structure some bonds reach a minimum distance beyond which they are thermodynamically unstable. The minimum attainable distance can often be estimated from a survey of the Cambridge structural database [UK]. If the pressure increases further, the structure transforms suddenly to relieve the stress, rearranging into a more stable configuration for that extreme environment, giving rise to a new polymorph’.

In this way graduate student Stephen Moggach has generated previously unknown polymorphs for cysteine and serine, in which the side groups are rearranged. In the simplest amino acid, glycine, the molecular orientations and hydrogen bonds can be altered under pressure to form two new high-pressure polymorphs.

Meanwhile, Pulham and student Francesca Fabbiani have been examining the effect of pressure on drug molecules such as paracetamol to see if it is possible to create new polymorphs and solvates of the drug.

The Edinburgh researchers believe that the pressure cell is a powerful way of finding more polymorphs of a given compound.

’Our early work on direct compression of crystals of paracetamol grown under ambient conditions was a failure,’ Pulham concedes. ’There are two known forms of paracetamol, but to get from one form to the other many hydrogen bonds need to be formed. The kinetic barriers are too great for pressure to induce cleanly and easily the switch from one form to another.’

A second approach was to grow crystals from melts under pressure. Under normal conditions paracetamol melts at 170 ?C, but applying pressure raises the melting point to over 250 ?C, explains Pulham. ’Because these are organic compounds, you get polymerisation and decomposition under these conditions, and essentially you end up with something resembling toffee in the pressure cell.’

The third approach was to grow the crystals under pressure from solution. ’In this way we removed the kinetic barrier to molecular rearrangement and we succeeded in forming new solvates of paracetamol,’ Pulham says. The solvent molecules were incorporated into the lattices of the new crystals and they discovered that one molecule of paracetamol can be induced to incorporate two of water or one molecule of methanol. ’These are completely novel solvates that have never been made at ambient pressure,’ Pulham says.

With typical chemists’ inventiveness the researchers wanted to see if ethanol could solvate with paracetamol. The team joked: ’Would we get the ultimate designer drug - something that causes intoxication but also contains the hangover remedy?’

The experiment had a significant result and produced a metastable orthorhombic form of paracetamol, which is extremely difficult to make under ambient conditions, says Pulham. ’This was a really exciting finding because it opens up a whole way of discovering and isolating new polymorphs and solvates of pharmacologically active compounds,’ he says.

But could the process be scaled up into a feasible synthetic regime? ’Clearly these experiments are carried out using only tiny quantities of material in a diamond anvil cell,’ Pulham concedes. ’But we have started work on scaling things up and have succeeded in carrying out these processes in reaction chambers that are two or three cubic centimetres in volume and have produced compounds in quantities of around half a gram, which could form the basis for larger-scale work.’

The group has also grown crystals of the Alzheimer’s drug piracetam under a range of pressures. This produced not only the three previously recognised polymorphs, but also a new polymorph and the first ever hydrate of the compound.

Commercial interest in the work is gathering momentum. ’We have had significant interest from the pharmaceutical industry with several contracts for high-pressure screening under negotiation,’ says Parsons.

Beginning to understand what happens in the molecular solid state at high pressure has opened up the possibility to target functional systems where pressure changes might affect properties significantly. For example, the group has been funded to look at single molecule magnets with the aim of tuning their properties with pressure.

Parsons believes that pressure could have a significant role to play in chemistry in the future. ’The past hundred years of chemistry have been largely about making new molecules,’ he says. ’The next hundred will be about how arrays of molecules can be made to interact in useful ways, and I think pressure will have an important part in this.’

Simon Hadlington is a science writer based in York, UK