A discouraging chemistry teacher and a failed rock band just made Harren Jhoti all the more determined to succeed. Sarah Houlton meets the 2008 Chemistry World Entrepreneur of the year

A discouraging chemistry teacher and a failed rock band just made Harren Jhoti all the more determined to succeed. Sarah Houlton meets the 2008 Chemistry World Entrepreneur of the year 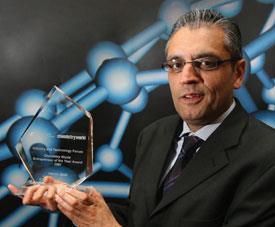 Harren Jhoti gained his love of science at an early age. ’I remember the Eureka moment, when I was at junior school,’ he says. ’It was a very sunny day and it struck me what a beautiful blue colour the sky was. I asked my teacher why it was blue, and she couldn’t answer - it turns out to be a very complex question.’

Such lifelong curiosity, allied with determination, has led Jhoti to his current position as founder and chief executive of Astex Therapeutics, a biotechnology company with a new approach to drug discovery: using high-throughput x-ray crystallography to screen small molecule ’fragments’ which are then optimised into drug candidates.

Jhoti’s scientific interest was encouraged by his father - Christmas and birthday presents consisted of chemistry sets and microscopes - and a couple of inspirational teachers at secondary school. But whilst his biology teacher was a conventional inspiration, encouraging his enthusiasm for science, his chemistry teacher’s influence was unusual. ’He told me I shouldn’t take chemistry as I was really poor at it,’ he recalls. ’Being quite belligerent, I figured that was a challenge, and took it anyway just to show him he was wrong.’

He decided to study biochemistry at Queen Mary College in London, UK - the location largely driven by his love of music. ’I formed a band, Emperor’s Clothes, with some other students, and we took a year off to try and make it big,’ he says. ’Our tutors expected never to see us again, but we were realistic and figured that if it wasn’t going to happen in a year, then it probably never would.’ His bass-playing exploits did give him a first taste of entrepreneurship, and, sadly, the rejection that goes with it. ’I soon learned not to take knock-backs from record companies too hard, which made it much easier to deal with being told "no" when I was raising money to start the business.’

The music industry’s loss was biochemistry’s gain, and Jhoti’s third year research project piqued his interest in science again. ’I realised a PhD would mean I could avoid getting a real job for a bit, and I spotted an ad in New Scientist  for an MSc at Birkbeck, London, in x-ray crystallography of biological molecules. It intrigued me - the thought of seeing something so small in 3D.’ He hadn’t realised when he signed up that Birkbeck was then a leading light in structural biology, and that was when he first encountered Tom Blundell, then head of department, and now head of biochemistry at Cambridge - and another of Astex’s founders.

This led to a PhD with Peter Lindley, where he was part of a team that determined the 3D structure of transferrin, a protein that carries iron around in the blood. ’They’d first grown crystals of it back in 1972,’ he says. ’My big contribution came when I spotted a new approach to solving protein structures at a conference in Australia. Everyone was sceptical when I suggested it, but we got the software and it opened up a lot of opportunities for determining structures more quickly.’

From an early period, even at Birkbeck, Jhoti was intrigued by the idea of applying crystallography to drug design in an industrial setting. But there were few industrial jobs going in the late 1980s, so he went to do a postdoc at Oxford with David Stuart. ’I turned down an offer from the Scripps Institute in San Diego - I must have been mad to say no to the sunshine and surfing.’ The project, in the cancer field, was funded by the UK’s Wellcome Trust, and he spent a couple of months in their labs in Beckenham, which convinced him that industry was the life he wanted.

He secured a job at Glaxo in Greenford in 1991, helping build a structural biology and crystallography group to assist in the design of a new generation of drugs. ’It was all new territory,’ he says. ’And I learnt a lot - the structural biology group at Glaxo became one of the best in the industry. But there was still more to be done, and I began to be intrigued by the concept of applying fragments to drug design.’

This was fundamentally different from what was being done in industry at the time - the vogue was to generate very many compounds, with the ’numbers’ game overriding much rational design. ’There was a sense that intellectual thinking was leaving drug discovery and, to an extent, that was true - everything was being done in a high throughput manner, without properly thinking about what we were doing,’ he says. ’The concept of using small fragments to look at protein binding was being used elsewhere, but applying x-ray crystallography was new.’ 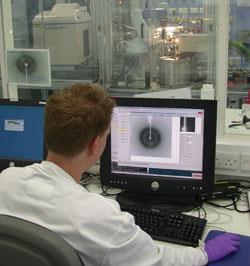 He faced a tough decision - whether to do it within GlaxoWellcome (GW), or leave and set up on his own. ’We’d just had our second daughter, and the risk of not having the money to feed two babies was scary,’ he says. But he took the leap and went it alone. ’My father thought I was tremendously stupid to leave a permanent, secure position, and was astonished that I was setting up my own company. The thing that really got him was that I’d have to return my company car.’

So he left GW in 1999 and set up Astex Therapeutics, along with his old mentor Tom Blundell, and Chris Abell from the Cambridge chemistry department. A fourth person, Roberto Solari - former head of cell biology at Glaxo - had helped Jhoti shape the business model, and by then he was working at investment fund Abingworth, who (along with Oxford Biosciences) provided the initial seed funding for the company of about ?800,000.

The initial plan was to fund postdocs at Cambridge to carry out proof-of-concept experiments in fragment screening. ’The question was whether, if you took a protein crystal and immersed it in a solution of fragments - small molecules with a molecular weight of 100-150 - you would be able to see any of the fragments binding to it,’ he says. ’Because they’re very small, the fragments would have low affinity, but the ligand efficiency is often better than for larger molecules. But could we pick up millimolar binding to the crystal structure? We found that you can see it very clearly, and crystallography is a very smart way of filtering out non-specific binding - if you see electron density for the fragment it can’t be randomly orientated.’

These experiments convinced the investors, and a larger investment round in 2001 brought in ?28.4m, which meant they were able to find proper premises. Jhoti had been operating out of a room in central Cambridge for the first few months, but once the experiments started working, the hunt for proper labs began. They moved onto the Cambridge Science Park, and he spent the next two or three years recruiting and building the company up. ’I was pleasantly surprised we didn’t just attract people from big pharma who wanted to try working in a smaller set-up, but some really bright graduates from academia, too,’ he says.

He also recruited Jose Cosme from Scripps in San Diego who had been working on cytochrome P450s all his career. ’We wanted to build a fantastic team in this area, and I managed to persuade him to come to us. And that led to our landmark work on P450s, which was published in Nature  and Science  - we were the first people to determine the 3D structures of the human isoforms of these enzymes. Jose had realised his life’s ambition - and in industry rather than academia. I’m very proud of that, and it really put us on the scientific landscape.’ 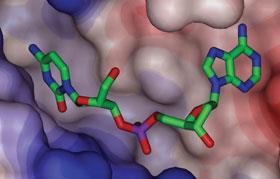 Astex now has more than 70 scientists, and has signed deals with various pharma companies, including AstraZeneca, Mitsubishi Pharma, Fujisawa (now astellas) and Aventis (now Sanofi-aventis) around the P450 work, and Boehringer-Ingelheim, Schering AG (now Bayer Schering Pharma), Novartis and AstraZeneca for fragment drug discovery technology. ’We recruited chemists who learnt how to expand these fragments into drug leads using structural biology and iterative medicinal chemistry,’ he says. ’We take the protein target, crystallise it, identify fragments that bind, and elaborate them into active compounds that would be interesting leads for development.’

They also started their own drug discovery programme in oncology. ’This is going really well,’ he says. ’In the past four years we’ve identified five candidate drugs. Two are now in patients, and we’re seeing interesting early clinical activity. One we’re going alone with, and the other Novartis has an option on. It’s really gratifying when people want to license our compounds - at the start I met many companies, and I might have been speaking Klingon as they had no idea what we were saying. They couldn’t get their heads around why we’d want to start with a compound with only millimolar activity when we need nanomolar compounds as drugs. But the whole point is that, by using simpler compounds, we can sample chemical space more efficiently. We’ve developed high-throughput crystallography to do it, and used it to develop some very interesting leads.’

This year, they’ve added another therapeutic area to the portfolio - antivirals. ’Our approach lends itself to any area as long as there’s a protein structure to work with. We’ve started a couple of programmes, and we’ve already had some interesting results. And I’m particularly proud that three of the 10 most cited papers in the Journal of Medicinal Chemistry  last year were from us.’

So what’s next for the company? Jhoti says they contemplated floating on the stock market last year, but the climate wasn’t good. He is now convinced they made the right decision in holding back, as the share price would have plummeted in the current market turmoil. ’We’re going to stay private for a while now,’ he says. ’We’ve raised ?64 million in venture financing thus far, and revenues are coming in from our collaborations, so we’re in good shape.’

He’s not done badly for someone whose chemistry teacher told him he’d never succeed at the subject. ’I still don’t really classify myself as a chemist - more a structural biologist,’ he claims. ’I like to think that this has been an advantage - I can come up with ideas that true chemists might think silly, and some of them have actually worked!’