Monsters from the deep preserved

Finding and then raising historic ships wrecked centuries ago is challenging business - but it's just the first part of the rescue process, says Elisabeth Jeffries

Finding and then raising historic ships wrecked centuries ago is challenging business - but it’s just the first part of the rescue process, says Elisabeth Jeffries

In February of this year, a discovery was made at the bottom of the English Channel: the remains of the HMS Victory - predecessor to the ship from which Nelson won the battle of Trafalgar. If, as many experts believe, she had four tonnes of gold on board when she sank in 1744, the treasure seekers who found her will be keen to get their hands on the ship’s remains as soon as possible. 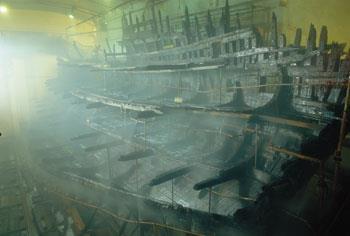 The find is not as rare as it may seem. Experts are aware of thousands of undersea wreckages in northern European waters. Yet most of the time they remain beyond the reach not just of fortune hunters but also of archaeologists. The expense of lifting, treating and finding a suitable home for these submerged historic treasures, and doubts as to the exact whereabouts of the wreck, mean that most are left alone. But there is also a third, more surprising reason: the ships may be better preserved if left where they are.

The dilemma of whether to raise the carcass or keep it in place for future, better equipped generations has been faced by many a museum curator. ’Present day conservation methods are not optimal - in some cases it might be better to leave it for the future,’ says David Gregory, a scientist at Denmark’s National Museum. For now, a major challenge is to ensure that rescued ships do not disintegrate. This is despite the fact that the last few decades have seen the steady development of a new science - marine heritage conservation and archaeology - which is going through the painstaking process of learning how to deal with these artefacts on land.

In the UK, the raising of the Mary Rose - Henry VIII’s warship, which sank off Portsmouth in 1545 while battling the French - is probably the most notable example of a ship’s resurrection. Yet more than 25 years after the event, curators will have to continue battling in the longer term if they are to succeed in displaying her for decades to come. By 2012 they want to house the Mary Rose in a new museum alongside the artefacts that were contained in it. And by 2016 they want the public to be able to view her in a dry, completely treated state.

’The aim is to remove the water and transform the ship from an unstable to a dry, stable state,’ says Poul Jensen, an expert at Denmark’s National Museum. However, simply removing the water from the timbers isn’t an option. ’Waterlogged wood has lost a substantial part of its mass so is not as strong as normal wood. Due to the loss of mass, air drying causes shrinkage and then collapse,’ explains Jensen.

During the first 12 years of the Mary Rose preservation project, the ship was sprayed almost constantly with chilled fresh water while the team of archaeologists carried out cleaning and reconstruction work. The water kept the wood in its saturated state, while washing out some of the salts and sediment. Chilling the water minimised bacterial and fungal growth. 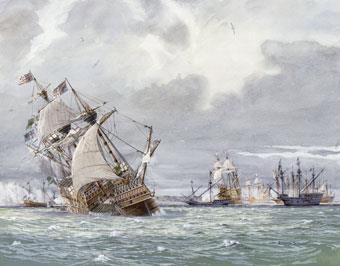 The Mary Rose, which sank in 1545, was said to be Henry VIII’s favourite warship

However, the water also kept air away from the structure, helping the conservation team avoid a major problem encountered by another great ship, the Vasa in Sweden, which is also undergoing long-term treatment. Both suffer from the problems typical of wooden shipwrecks, with significant amounts of sulfur compounds in the lignin of the wooden cell walls. The Mary Rose timbers contained iron sulfides, which had built up when the ship was lying on its starboard side in anaerobic sediment dating from Tudor times. Their presence was probably due to the corrosion of guns and a few metallic nails - though most of the ship was held together by wooden pegs.

’If the ship had been held together by iron bolts, they would have corroded so there would have been nothing to hold it in position,’ says Mark Jones, head of collections at the Mary Rose Trust. Thanks to the fact that it was held together by the pegs, the starboard side of the ship, which was buried in the seabed, was lifted in one piece. The exposed port side had been eaten away by wood-boring shipworms and other creatures.

Once exposed to oxygen, the iron sulfides could have formed sulfuric acid - a problem that may be exacerbated by sulfur-metabolising bacteria - which would inevitably rot the structure. The judicious use of sodium carbonates to neutralise it avoided this problem.

Following the water treatment, the ship’s structure was stabilised by spraying with polyethylene glycol (PEG) for several years - a now well-established technique for preventing shipwrecks from falling apart. This waxy, water soluble polymer infiltrates cavities in the wood, displacing the water and steadying the structure. It would be very difficult to freeze- or air-dry any wooden ship without prior treatment of this kind, says Jensen.

Mary Rose scientists have so far successfully managed the delicate, step-by-step process of conserving the ship and succeeded in avoiding the build up of sulfuric acid, introducing antioxidants to prevent further oxidation. But this conservation work is full of unknowns, and it is difficult to predict what challenges could come up in future.

Operating in a different environment, scientists working on the Vasa in Sweden, which was raised in the 1960s, came up against an unexpected problem relating to acidity. The ship, built in the 1620s and sunk on her maiden voyage, started to ooze a yellow substance in the early part of this decade while on display at Stockholm’s Vasa museum. The scientists had not allowed for the effect of humidity in the museum’s climate, which was too high. Subsequent investigation revealed that the humidity had triggered off the conversion of methyl sulfides into sulfuric acid. 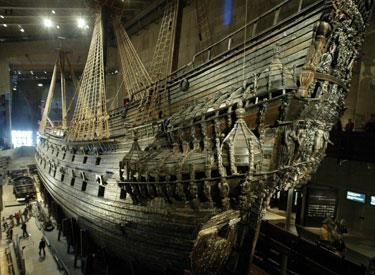 The Vasa sank on her maiden voyage in 1628

’In the year 2000, humidity levels were unstable and, as a result, chemicals were transported in and out of the wood. But now the situation is stable. It doesn’t look as though we’ve had any new salt formations during the last two years,’ says Magnus Olofsson, head of the Vasa conservation unit. The team halted the progress of acid build up by installing a new climate control system.

They were, however, more fortunate than the Mary Rose team in that they have not had to deal with the conditions present in the English Channel. The low salinity of the Baltic means that fewer wood-boring organisms are present, and the ships in the region are more fully preserved.

In the US, scientists are tackling similar problems, though in this case with a metal structure. The Hunley - a submarine used in the Civil War, which sank in 1864, shortly after becoming the first submarine in history to sink an enemy ship - was found in waters off South Carolina in 1995 and salvaged in 2000. The team have had to deal with a range of materials, including cast iron, wood, brass, glass and rubber. As in the case of the Mary Rose and Vasa, the vessel was immediately treated using fresh water once it was out of the sea. It had been subjected both to concretion (a cover of hard matter) and corrosion (varying in extent in different parts of the submarine) processes while under water.

The most pressing concern is to remove chlorides from the artefact. Typically, scientists treat artefacts using electrochemical methods in a caustic solution and extraction in alkaline sulfite, a repetitive process which may take up to 10 years, in order to minimise the corrosion within the metal caused by these salts. ’However, once put on display, corrosion may start up again after a few years and is sometimes severe,’ says Michael Drews, director of the Clemson Conservation Center where work is being carried out on the Hunley. 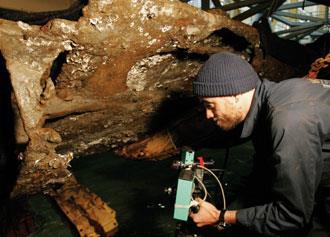 To counter this problem, Drews developed a new method that could be used for treating the vessel, which they have tested on smaller artefacts. The scientists believe that akaganeite, a ferric mineral present in marine artefacts, may be one of the most important factors responsible for the active corrosion observed before and sometimes after treatment, and that it is certainly a potential source of future chloride release. Any successful treatment involves minimising the chloride inside the artefact, they think.

Experiments have shown that after iron samples from a marine environment have been dried in air, some of the chlorine can no longer be removed through immersion in a caustic soda, although all of it could be removed if the samples had not been exposed to oxygen. They have concluded that a chlorinated phase is triggered off by exposing the metal to oxygen and humidity. Drews and his colleagues have therefore developed a technique that involves using subcritical water alkaline solution at up to 230?C. They have found that after this treatment (in smaller objects), very low levels of chloride remain. However, they cannot predict yet whether this treatment will be appropriate for the submarine as a whole.

Managing salvaged vessels is a finicky business and potentially more destructive than keeping them underwater. ’When you bring it out of the sea, the clock starts ticking straight away. The archaeological work is such that it disturbs an artefact that has reached an equilibrium,’ explains Paul Mardikian of the Clemson Conservation Center. Hence there is plenty of work ongoing to better preserve ships in situ. The advantage of leaving a wreck in place is that microbiological activity reduces if the ship is buried at least 10cm under the sea bed, and so this may be a better short or medium term place to preserve it. Some ships have even been reburied after being salvaged, to better preserve them.

Of course, things may change in future and the technology will improve. Scientists at the University of Cambridge say they hope to develop an improvement to the PEG treatment, using a new technique that could have far reaching implications in other fields too. Oren Scherman, alongside colleague Jonathan Nitschke, says he is developing self-assembling polymeric materials that he hopes may offer a new method of protecting waterlogged wooden artefacts excavated from marine environments - though the research is in the early stages. 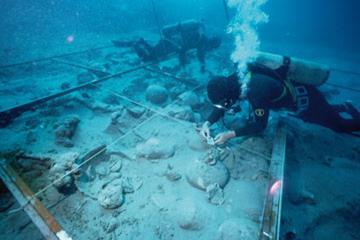 Collecting artifacts from the sea floor demands an organised approach

The technique would involve impregnating the artefacts with an aqueous solution of ’functional precursors to self-assembling materials,’ says Scherman. These will be designed to react with iron and sulfur species present within the wood, leading to ’a densely cross-linked polymeric network’ which would sequester the iron and sulfur species and prevent them from accelerating degradation processes in the wooden artefact. At the same time, it will also mechanically reinforce the wood. Scherman likens the process to inserting ’macaroni noodles’ whose ends find each other and fall into line, rather than trying to insert long spaghetti strands that only permeate the wood after years of spraying.

All the scientists working in the area are dealing with complex problems and operate in uncharted territory, since there is little experience in the field compared to other, more established chemical and archaeological fields. ’For example, is PEG the best impregnation material?’ wonders Gregory ’And in the case of freeze drying - are there other methods which are more cost effective? There is plenty that needs to be improved,’ he concludes.

Elisabeth Jeffries is a freelance science writer based in London, UK