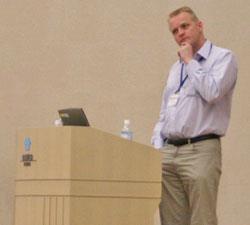 Tom Welton knows his solvents. In particular Welton knows more than your average chemist about room temperature ionic liquids, a class of chemicals being touted as the solvents of choice for environmentally friendly chemical reactions.

Welton, currently the head of the chemistry department at Imperial College London, UK, has worked with these strange liquids made from two salts, which melt together at room temperature when they come into contact, for most of his academic career.

The hope for ionic liquids as green solvents comes from their lack of vapour, and their ease of recycling. Researchers around the world have spent years investigating the properties of these liquids, and doing chemical reactions in them.

Yet for many of those years something didn’t seem right to Welton. He was uncomfortable with the notion that reactions done in these special solvents performed differently as a direct, general, consequence of the ionic liquid. As far as Welton could see, after an exhaustive trawl of the literature, there was no such thing as a general ’ionic liquid effect’ and no quantitative evidence that such an effect existed.

’I spent years saying there was nothing special,’ says Welton. But he needed proof that ionic liquids didn’t alter reactions more than a conventional, molecular solvent would. That quest for proof would force Welton to eat his words, and show that ionic liquids are more special than even he had imagined. 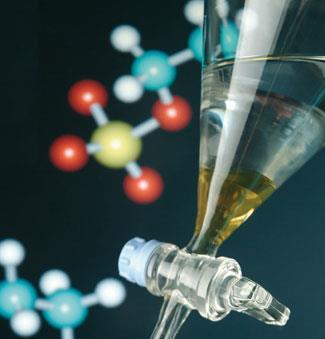 In a plenary lecture at the 2nd International Congress on Ionic Liquids, in Yokohama, Japan, in August 2007, Welton told the audience of his hunch - that there was no such thing as an ionic liquid effect.

Meanwhile, one of Welton’s students was laboriously working to prove this by following the speed at which reactions progress when taking into account concentrations of the reacting molecules. The reaction Welton chose was a nucleophilic substitution reaction, a well known organic reaction where one chemical group rich in electrons (the nucleophile), replaces another group by attacking a molecule’s weakest, electron poor part (the electrophile).

Welton wanted to test different chemical combinations, in different solvents both molecular and ionic liquids. If the graphs following the reaction rates and concentration of reactants that were plotted all turned out to have the same shaped line, this would show that the reactions were all following the same trend, and Welton would finally have proof that the ionic liquid effect does not exist.

Welton was pretty pleased with himself, sure that he had proven himself right. All that was left was to check the final reaction: a negatively charged nucleophile, a chloride ion, with a positively charged electrophile, a sulfonium salt. Welton was convinced that this last test was a mere formality. ’We’d done three quarters of the way through,’ recounts Welton. ’I said to the student, "just do a couple of these because we need to do it for completeness, then once you’ve done that we’ll move onto something more interesting".’ 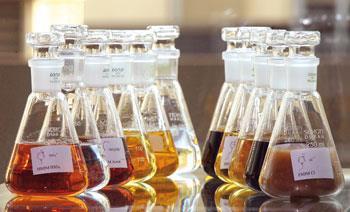 But in this final reaction something different happened. The graphs for the reaction in the ionic liquids and in conventional solvents no longer looked the same.

’Famous last words,’ says Welton of his previous instructions to the student. ’We were seeing a unique behaviour.’ For this reaction of charged reactants, in all the molecular solvents such as acetone, butanol, dichloromethane, the rate during the course of the reactions followed the same kind of path. But for all the ionic liquids, those graphs were a startlingly different shape, the reaction rates all followed another kind of path, and were much slower.

After years of proclaiming there was no such thing as an ionic liquid effect, Welton’s attempt to prove it had outdone him.

Ken Seddon, from Queen’s University Belfast, UK, and one of the first researchers to suggest performing chemical reactions in ionic liquids, was impressed by this proof of an ionic liquid effect, if not too surprised that it exists. ’It’s a very important demonstration,’ says Seddon. ’Tom has done what somebody should have done years ago, which is a proper serious study, and he’s got very good results.’

But in ionic liquids these ion pairs weren’t forming. The ionic liquid was somehow shielding the ions from one another. This changes the behaviour of the reaction significantly. ’In the ionic liquid the same reaction happens so you get the same product out, but now instead of the reactive anion and the reactive cation being stuck together in this ion pair that then goes on to react, they only react when they happen to bump into each other in the normal manner,’ says Welton. 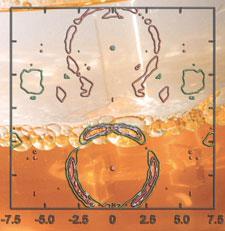 Theoretical chemist Ruth Lynden-Bell from the University of Cambridge, UK, has worked with computer models of ionic liquids for some time, and she was intrigued by Welton’s observations.

Lynden-Bell stepped in to help explain what Welton was seeing. She performed molecular simulations of two charged spheres, one negative and one positive, dissolved in an ionic liquid, and then measured the forces between those charged spheres.

And these shells, formed by the ionic liquid, keep those charged spheres apart - they don’t form the ion pairs that are seen in molecular solvents. ’What really surprised me was not that there was some of this screening that destabilised the ion pair, but how strong it was,’ says Lynden-Bell.

With the shielding effect worked out by Lynden-Bell on a basic system, other researchers, including Patricia Hunt also at Imperial College London, are now performing calculations on more realistic systems, including the species that Welton used in his reactions. 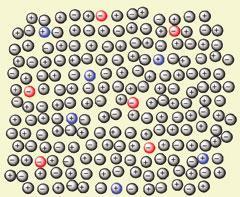 But molecular simulations take enormous amounts of computing power, so for a first stab at the problem, Lynden-Bell’s simple approach is a sensible one, Seddon adds. ’It’s very difficult to get a very precise study,’ he says. ’You’d have to be sure why you wanted to spend that amount of computational time. To model on a discreet ion pair is a much simpler job.’

Even without proof that ionic liquids can have a general effect on reactions, they were still being widely used. For example, organic chemist Steven Ley, from the University of Cambridge, has used ionic liquids as solvents in his total synthesis chemistry. And Seddon showed in 2004 that the reaction of toluene and nitric acid in three different ionic liquids gives three different products. Seddon also says that certain organic reactions, like the Friedel-Crafts reaction, zip along much faster when performed in an ionic liquid, because of the specific ionic intermediate that is made in the process of the reaction.

But those are all one-off examples, not proof of a general phenomenon. ’What [Welton] has shown is much more general, and therefore more important,’ says Seddon.

Welton is still looking at the special properties of ionic liquids and has come up with a system that could be used as a simple diagnostic for ionic liquid-like behaviour.

That system is the salt of a dye that contains an iodide ion and a pyridinium ion. When this dye salt is dissolved in a solvent, its absorption can be measured by UV spectroscopy. Different solvents affect the extent at which the dye ions are associated - paired together - or dissociated - nowhere near each other. This dissociation/association behaviour is in equilibrium in the solvent.

Welton investigated how the concentration of the dye changes the intensity of the absorption in different solvents, which is related to the equilibrium. A graph of concentration and intensity gives a straight line only if the ions in the salt are always completely dissociated, and no energy is needed to rip them apart. And this only happens in ionic liquids, where the ionic liquid’s ions surround the dye ions.

It could be that mixing dyes in ionic liquids, measuring their absorption and looking for this simple straight line could be used as a diagnostic for ionic liquid behaviour. It could even be used to calculate how much ionic liquid might be needed in a mixture with conventional solvents in order to get the benefits of an ionic liquid effect in a reaction, says Welton.

Welton is now looking at the behaviour of ions of different sizes, and continuing to investigate the basics of how ions interact with each other. He thinks that the understanding of ion pairs will need to be refined in light of his discoveries, with practical consequences. ’There is a huge number of processes where ion pairing is important,’ Welton says. Ionic liquids could alter how those processes are controlled. ’It’s forced us to be a bit more precise about what we mean when we say ion pair.’

So Welton’s stance about the ionic liquid effect has been completely reversed. He remains philosophical about this, and reflects on how close he was to uncovering the truth when he stood up in Yokohama in 2007 and renounced any ionic liquid effect: ’It can only have been a matter of months before the first results started to come in that ended up showing that I was wrong,’ he says. ’Typical!’

Katharine Sanderson   is a science writer based in London, UK