Sweets for my sweet

Do you take sugar? One lump or two? Or is it a case of sucralose or aspartame? Many of us opt for sweeteners and diet drinks but they are rarely as satisfying as the full-sugar alternative and some people complain of a lingering bitter aftertaste. Since the discovery of the tongue’s sweet and bitter receptors, researchers have been hard at work masking bitterness and enhancing the sweetness of sweeteners. 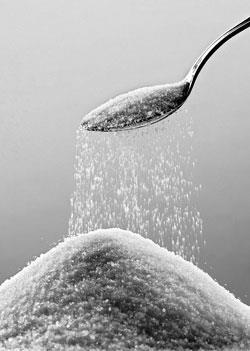 Launching a new sweetener is a difficult business. First, regulatory approval is notoriously hard to come by, and second, even when a product has been approved it will almost inevitably come up against consumer safety concerns. Take aspartame, for example, which gained EU-wide approval in 1994 and was approved for use in all foods by the US Food and Drug Administration (FDA) in 1996. Despite numerous studies proving its safety, hundreds of webpages still warn of its ’dangers’ and even of ’aspartame poisoning’.

It took almost 30 years for UK company Tate & Lyle to take sucralose from the lab to market in the EU. The tale of sucralose’s serendipitous discovery is a popular one. In 1975, an Indian postdoc called Shashikant Phadnis was working on a Tate & Lyle-sponsored project at Queen Elizabeth College (now King’s College) in London. Phadnis misheard a telephone request to prepare a sample of a sucrose derivative for testing, he thought they were preparing it for tasting. ’He found that, rather surprisingly, it was very sweet,’ recalls Leslie Hough, who led the team. The discovery paved the way for sucralose, which is 600 times sweeter than sucrose (table sugar) and sold by Tate & Lyle as Splenda.

Most of the sweeteners launched in the 20th century were discovered by chance, mainly through sloppy lab practices that would be unthinkable today. Take cyclamate, for example. It was discovered by a student at the University of Illinois, US, working on antifever medication. When he put the cigarette that he was smoking down on the lab bench it picked up some cyclamate, giving it a distinctly sweet taste. Or so the story goes. 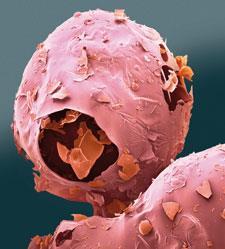 Crystal of the artificial sweetener aspartame

At the time of sucralose’s discovery, cyclamate had been banned by the FDA over cancer fears and saccharin was expected to be next on the list. ’There is an urgent requirement for a safe, low or non-caloric sweetener,’ wrote Hough and his Tate & Lyle collaborator, Riaz Khan, in a 1978 Trends in Biochemical Sciences  paper. At the time the world was producing a huge excess of sugar, recalls Hough. So there was plenty spare to be adapted into a new type of sweetener. ’It seemed reasonable to assume that we could make derivatives of sucrose and perhaps find an application.’

As part of the Tate & Lyle project, Hough’s team was systematically replacing sucrose’s eight reactive hydroxyl groups with halogen atoms, starting with chlorine. The original plan had been to use this as a simple, initial reaction step, later replacing the chlorine atoms with something else. But after Phadnis’s discovery, Tate & Lyle set up a taste panel, at the University of Reading in the UK, to test vast numbers of sucrose compounds containing chloro groups. Phadnis had tasted a four chloro sucrose compound, but substituting just three of the OH groups with chloro gave a sweeter compound, which was later named sucralose.

Sucralose was first approved in Canada in 1991. Subsequent approvals came in Australia in 1993, New Zealand in 1996, the US in 1998, and the EU in 2004. According to Tate & Lyle, Splenda is now used to sweeten over 4000 different food and drink products around the world and held 25 per cent of the global artificial sweetener market in 2008-2009.

The sucralose story doesn’t stop there. By adding a new molecule called an enhancer, sucralose can deliver more of a sweet hit in the mouth. One such enhancer, developed by Senomyx, a US flavour ingredient company based in San Diego, promises to allow food and drink manufacturers to cut sucralose concentrations and so deliver a more realistic sugar taste.

Splenda (sucralose) is used by the US soft drinks industry

Enhancers have no taste but ’modulate’ sweet receptors to respond to a lower concentration of sweetener, explains Don Karanewsky, senior vice president of discovery at Senomyx. The company has built itself around the science of receptors. It was co-founded by Charles Zuker, who led the US team credited with identifying and characterising our sweet, sour, bitter and umami (savoury) taste receptor cells in 1999. The researchers at the University of California, San Diego, US - as part of a collaboration with the US National Institutes of Health - identified the genes that encode taste cell proteins called G protein-coupled receptors (GPCRs). Every taste bud on the tongue contains 50 to 150 taste receptor cells, each armed with the protein receptors which bind to taste substances, recognise them, and switch on the taste cells which then transmit information to nerve cells and into the brain.

Sweet tastes are recognised by a group of GPCRs called T1R receptors. Each of these has a section resembling a Venus fly trap, which snaps shut when a sweetener binds. The enhancers apparently bind near the fly trap opening, helping it to stay shut once the sweetener has struck. ’They don’t bind to the same region of the receptor as the sweet receptor agonist - they bind to an adjacent allosteric site,’ explains Karanewsky.

Senomyx discovers new enhancers by screening thousands of potential compounds using human taste receptor assays based on Zuker’s original work. The assays use molecular biology to over-express the sweet receptor GPCRs in mammalian cells. When a sweet compound activates a receptor, calcium levels increase. This increase is picked up by a calcium-sensitive dye, which fluoresces when hit by a laser.

The company screens an ever-growing collection of molecules, currently standing at over 400 000 synthetic compounds and around 200 000 natural extracts. The synthetic compounds are chosen for their food-friendly nature, and tend to be relatively simple, with a low molecular weight, good solubility and heat stability. ’We add to the library every year,’ says Karanewsky. ’We are now generating our own fractionated extracts from plant materials, biasing our natural library towards plant species that are known to have particular flavour characteristics.’

Once the potential sweet enhancers have been picked up by the assays, they are optimised by Senomyx chemists, who fiddle with the chemical structure to enhance activity and improve physical properties such as stability and solubility. Then it’s on to an external panel for taste tests.

Senomyx’s sucralose enhancer is licensed to Swiss fragrance and flavour company Firmenich, and is likely to be launched later this year, as an ’artificial flavour’ effective at parts per million concentrations.

Firmenich has also taken on Senomyx’s sucrose enhancer, which the company claims will allow manufacturers to halve the number of calories in a standard soft drink. Senomyx is now focusing on developing fructose enhancers to help soft drink manufacturers cut the levels of the calorific high fructose corn syrup in their products.

Senomyx hopes that the enhancers will help manufacturers to rid sweetened products of aftertaste, simply by cutting sweetener concentration and enhancing sweetness. Another way to deal with a sweetener’s shortcomings is to use it in combination with other sweeteners. Reading Scientific Services Ltd (RSSL), which offers contract services to the food industry, is an old hand at combining sweeteners. ’We have a good understanding of the taste profile elicited by different sweeteners. Some might have a delayed sweetness onset, some might have sweetness in the aftertaste, while some might have bitterness,’ explains Sarah Marshall, technical manager at RSSL. ’The idea is that you select different sweeteners so that they complement each other’s taste profile.’

There’s also a wide range of flavouring materials which can have an impact on the taste of sweeteners. ’By careful selection of things like acids and bases, you can adjust the taste profile of sweeteners,’ explains Marshall. Adding malic acid, lactic acid or tartaric acid can have a big impact on how you taste sweetness. ’Something sweetened with aspartame will taste very different to something which has citric acid and aspartame,’ adds Marshall. 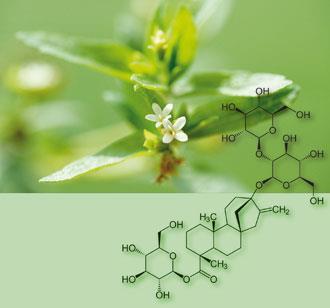 RSSL is currently working on a number of projects on natural sweeteners extracted from a herb native to Paraguay called Stevia rebaudiana  (or sweetleaf). It was first described in 1899 by Swiss botanist Mois?s Bertoni and in the 1930s chemists isolated two of the steviol glycosides that give Stevia  its sweet taste: stevioside and rebaudioside. Its leaves taste over 30 times sweeter than sucrose, and its sweetest glycoside - rebaudioside A (reb A) - tastes 300 times sweeter.

Stevia  has been used as a sweetener in Japan since the 1970s and is also grown and used in other Asian countries. China, for example, is a major Stevia  exporter. Steviol glycoside extracts have been available as tabletop sweeteners in Australia and New Zealand since 2008. In the US, the FDA accepted the GRAS (generally recognised as safe) status of reb A in December 2008, and of a mixture of steviol glycosides in September 2009. Then, this April, EU approval for reb A came a step closer, with the European Food Safety Authority issuing a positive opinion on the safety of steviol glycosides. Final EU approval is expected next year (France has already approved reb A under a two-year trial). 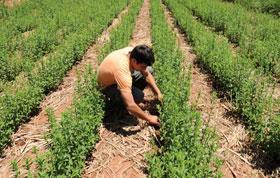 A Stevia plantation in Paraguay

Givaudan is reported to have discovered bitter taste receptors triggered by reb A, but remains tight-lipped about the research. As part of its ’receptor-based discovery programme’ it is working on incorporating masking and enhancing compounds into flavours designed to accompany Stevia  -based sweeteners.

Some studies suggest that Stevia  may have added health benefits. For example, researchers at the Indian Institute of Chemical Biology in Calcutta suggest that Stevia rebaudiana  may be a good source of natural antioxidants. They have isolated and characterised a series of flavonoids from Stevia  and are currently ’in negotiation with two/three Indian companies’ interested in the plant’s antioxidant properties, according to group head Sharmila Chattopadhyay. Meanwhile, research on mice by a team led by Benjamine Geeraert at the Katholieke Universiteit (KU) Leuven, Belgium, suggests that stevioside can help prevent hardening of the arteries by increasing ’antioxidative defence’ in vascular walls. Stevioside also appeared to increase insulin sensitivity in the mice and the researchers have called for more work to be done into how stevioside might prevent the insulin resistance that can accompany obesity and which can cause type 2 diabetes.

Jan Geuns, from the functional biology lab at KU Leuven, has spent decades working on Stevia  and is president of the European Stevia  Association. He set it up, with the help of a number of companies wanting to use Stevia  in their products, to help fight what he saw as ’the big sugar lobbies’. Now that Stevia  is achieving regulatory approval in countries around the world, he is working on developing techniques to measure the purity of steviol glycosides. This is crucial because many of the regulatory approvals specify percentage purity of Stevia  compounds. Measuring the concentrations of the steviol glycosides is very tricky, says Geuns.

After years of defending Stevia  against suggested health concerns, its supporters celebrate a growing acceptance by the world’s regulatory authorities. It’s over 30 years since steviol glycosides were first commercialised as a sweetener in Japan. Another 30 years will perhaps take us to the stage where we can no longer spot sweeteners in a blind tasting. Could we even give up sugar altogether? No, perhaps not.