Are you the only chemist in your family? For many of you the answer is yes. But scientific dynasties are certainly not unheard of, with famous examples including the consecutive generations of Nobel prize winning Curies, Braggs and Bohrs, and the numerous Darwins and Huxleys invited to become fellows of the UK Royal Society. Another notable scientific family are the Perkins. 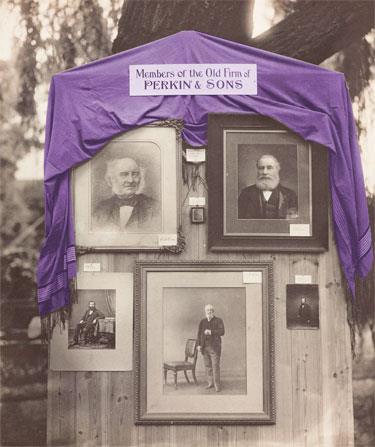 Englishman William Henry Perkin and his three sons contributed significantly to the advancement of both industrial and academic chemical research during their professional lifetimes. William Sr (1838-1907) is best known for developing the first synthetic mauve dye, while his eldest son William Henry Jr (1860-1929) was the most famous of the children, leaving his lasting legacy in the way chemistry is taught in universities.

When William Sr was born, his family were moderately prosperous but still lived in a run-down riverside neighbourhood in London’s east end, close by the sailors’ grog-shops of Cable Street. However, he received a good education at the City of London School, and contemplated training as an architect until a friend pointed him in the direction of chemistry. As William Sr explained during a speech in 1906: ’when I was between 12 and 13 years of age, a young friend showed me some chemical experiments and the wonderful power of substances to crystallise in definite forms. I immediately commenced to accumulate bottles of chemicals and make experiments.’ 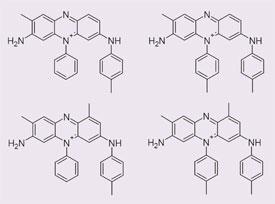 Perkin’s mauve dye was eventually found to be a mixture of four different, but closely related molecules

In 1853, aged 15, William Sr enrolled at London’s Royal College of Chemistry. For his professor, August Wilhelm von Hofmann, training chemists was not sufficient - he also wanted to make discoveries with industrial applications. Recognising William Sr’s ability, Hofmann hired him as an assistant in 1855. Hofmann was fascinated by coal-tar, a gasworks waste product containing many poorly understood substances. He thought one of these substances - allyl toluidine - might produce quinine (an alkaloid being used in the treatment of malaria at the time) if oxidised with potassium bichromate, as the empirical formulae of the two compounds suggested the following reaction could occur.

Hofmann could not have known this combination was impossible - all molecular structures were then conjectural at best, and quinine’s was not determined until 1908.

During the Easter vacation of 1856, William Sr tried the experiment in his home laboratory, but instead of a valuable medicine he obtained an unpromising brown precipitate. On applying the bichromate oxidation to a simpler coal-tar product - aniline (in a sulfate solution) - he noticed that the resulting black sludge left purple stains on a cloth used for wiping the laboratory bench. William Sr and his friend Arthur Church were already looking for potential dyestuffs and this seemed a likely prospect. In June 1856, William Sr sent samples of silk coloured with a purified extract of the black residue to a Scottish textile manufacturer. The response encouraged him to leave the college and establish a dye factory in Greenford Green, Middlesex. 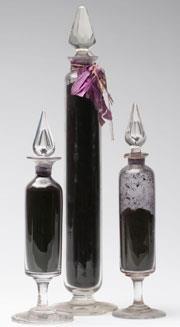 Hofmann opposed the plan, fearing William Sr lacked the experience to develop his discovery industrially. (Another of Hofmann’s assistants had died in a benzene fire while pursuing a manufacturing project.) But 18-year-old William Sr, supported by his family, overcame all the difficulties of scaling up his process. These included securing supplies of pure ingredients, acquiring robust reaction vessels, and finding suitable mordants to bind the dye firmly to textile fibres. Another tough task was persuading customers to try the product - initially marketed as ’Tyrian purple’, it soon became known as ’Perkin’s mauve’.

Fortunately, the time was ripe. In 1857 the Empress Eug?nie (wife of the French emperor Napoleon III) adopted a shade of purple which the French called ’mauve’ for her new outfit, and where Paris led, London followed. Perkin’s mauve was cheaper than traditional purple dyes extracted from natural products, and less subject to fading by sunlight or washing. It became so popular that English humorists joked about ’mauve measles’ and ’mauve mania’. Though not the first synthetic dye - a few precursors had found niches in the market - it was the first to be mass-produced. Other manufacturers adopted the process, while chemists (including William Sr himself, and several of Hofmann’s other pupils) discovered more dyestuffs in a multitude of colours. A thriving industry existed when William Sr, still only 36, sold his business and retired from manufacturing.

Gentlemanly leisure was not his aim. Throughout his career William Sr had continued working in his private laboratory, but now research was his main occupation. In all, he published 90 papers in the journal Transactions of the Chemical Society. Among his achievements were the ’Perkin synthesis’ for unsaturated organic acids, the first synthesis of coumarin, and the synthesis of cinnamic acid from benzaldehyde. He also carried out pioneering work on the effect of magnetic fields on the optical rotatory power of organic compounds. William Sr became a fellow of the Royal Society in 1866, earning its Royal Medal in 1879 and Davy Medal in 1889, and was president of the Chemical Society and the Society for Chemical Industry. He was knighted in 1906, the year before his death.

William Sr married Jemima Lisset in 1859, and they had two sons William Henry Jr and Arthur George. Jemima died of tuberculosis in 1862, and in 1866 William Sr married Alexandrina Mollwo. They went on to have a son, Frederick Mollwo, and four daughters - Helen, Mary, Lucie and Annie. The entire family were accomplished musicians, often playing together as a nine-piece chamber orchestra. William Sr had been proficient enough as a violinist to consider forming a professional string quartet with his own brother and two sisters, William Jr was an excellent pianist, while Arthur played flute in the family ensemble (and later, first bassoon in a Yorkshire amateur orchestra). 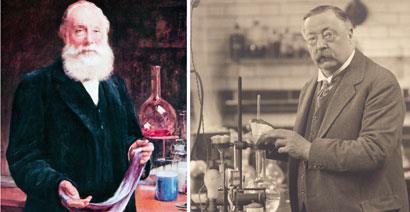 All three sons succeeded as chemists. The youngest, Frederick, published original research and a respected textbook. The middle son Arthur managed a dyeworks, became a professor at University of Leeds, and in 1924 won the Royal Society’s Davy Medal. But it was William Jr who had the most distinguished career. Like his father, he attended the City of London School and the Royal College of Chemistry (by then absorbed into the Royal College of Science), while acquiring research skills in the family laboratory. He also studied in Germany, gaining a PhD at W?rzburg with Johannes Wislicenus in 1882, and working as assistant to Adolf von Baeyer at Munich.

In 1887 William Jr became professor of chemistry at Heriot-Watt College, Edinburgh, and in 1890 he was elected as a fellow of the Royal Society. After taking the chair of organic chemistry at Owens College (now University of Manchester) in 1892 he developed a world-class research centre, with laboratories funded by the philanthropist Andrew Carnegie. His graduates included the future Nobel prize winners Robert Robinson and Norman Haworth. While pursuing his academic agenda William Jr maintained close relations with local industry, developing numerous research projects with commercial applications.

In 1912 when he moved to the University of Oxford, to become the Waynflete Professor of Chemistry, the chemistry department there was in decline. Reforms were urgently needed, but the decentralised power structure of a collegiate university permitted vested interests to obstruct them. However, William Jr was a convivial host who kept a good wine cellar, and he gained allies at high tables. After encouraging Sir William Dyson Perrins (of Lea and Perrins’ Worcestershire Sauce) to fund the first stage of his new laboratory, he manoeuvred the university into paying for its completion in 1922. 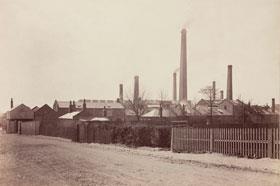 New facilities were not

the only changes instigated at Oxford by William Jr. He also introduced a DPhil (the equivalent of a PhD) degree in chemistry, and added a substantial laboratory component to the undergraduate programme. These changes, and the stimulus of his practical teaching, dramatically increased the department’s research output.

William Jr’s own research focused on the analysis and synthesis of natural products - particularly terpenes, alkaloids and dyestuffs. He had many successes, despite shunning the new physical methods of analysis in favour of well-tested bench techniques (and the structural intuition developed during years in the laboratory).

Theoretical debates had little interest for him, though he made a decisive contribution to one while in Germany. Many chemists then believed that rings composed of fewer than five carbon atoms were impossible. William Jr proved them wrong by synthesising cyclopropane and cyclobutane derivatives, preparing the way for the ’strain theory’ developed by his mentor, von Baeyer.

Like his father before him, William Jr was awarded the Royal Society’s Royal Medal (in 1904) and the Davy Medal (in 1925), and served as president of the Chemical Society.

In 1887 he married Mina Holland, who survived him. The union was childless, but to generations of students William Jr was known affectionately as ’Pa Perkin’.

He remained active and in robust health until shortly before his death in 1929.

William Sr’s aniline experiments launched a cluster of industries based on organic chemical syntheses. Dyes were followed by medicines, explosives, synthetic rubber, plastics, food additives, detergents and many other products.

However, the chemists and chemical engineers needed to service these industries (and develop new ones) required formal training. Experience in the workplace remained vital, but learning by trial and error, as William Sr had done at Greenford Green, was no longer sufficient.

On the other hand, graduates brimming with theoretical knowledge were of limited utility unless they had spent time grappling with genuine research problems. Enabling them to do so meant designing courses with a more substantial practical component. This in turn required more expensive laboratories, compelling professors to become diplomats and fundraisers as well as inspirational research supervisors. William Jr was one of the most successful practitioners of these skills of his time, and many of his pupils passed them on when they in turn joined the professoriate.

Today, William Sr’s pioneering industrial processes are only of historical interest. And William Jr’s approach to academic politics would appear amateurish inside the managerial machinery of a modern university.

But their eagerness to cross the frontiers of chemical knowledge and bring home trophies from the other side has passed down the generations. Wherever that enthusiasm survives, their legacy endures.

Mike Sutton is a visiting fellow in the department of humanities of Northumbria University, UK