Three years have passed since beekeepers in the US recognised the current wave of disappearing honeybees as a widespread problem and started to call it Colony Collapse Disorder, or CCD for short. By the spring of 2007, other countries, including the UK, Germany, Spain, Italy, Canada and Taiwan, had also reported unusually severe losses of bee colonies, although it is far from clear whether the problem is the same one in all these places.1 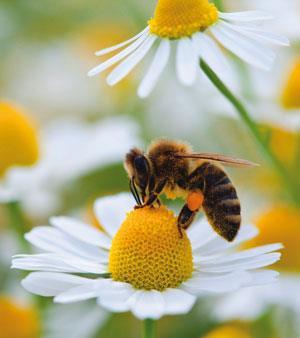 The ’classic’ CCD phenomenon as described in the US implies that beekeepers find a hive deserted by adult bees, but with food provisions and brood, and with no obvious indication of anything that might have driven the bees away. Typically, there are no dead or diseased bees near the hive either.

As the phenomenon garnered attention around the globe, people started to suggest a wide range of potential causes, ranging from mobile phone signals (which might confuse the bees so they don’t find home) through to new variants of old pathogens, and to new insecticides. While some of the wilder theories (including the one about mobile phones) were soon dismissed, insecticides, and especially the neonicotinoid group soon came under closer scrutiny.

The idea that insecticides from the neonicotinoid group, such as imidacloprid, are fatal to bees has the longest tradition in France, where some neonicotinoids were banned for certain uses in 1999. By mimicking the neurotransmitter acetylcholine (ACh) without being recognised by the enzyme that normally inactivates ACh signals, these chemicals expose the central nervous system of insects to a permanent bombardment with false signals. Thus it is entirely plausible that they may confuse bees to an extent that they don’t find home.

Clothianidin is one of the insecticides under suspicion

Standing against the hypothesis, however, is the observation that the bans introduced in France left no significant mark on the bee mortality statistics. Either the French farmers found a way of bypassing the ban, or the banned substances weren’t causing that much harm after all. Due to the inefficiency of the ban in France, manufacturers including Germany-based Bayer (who make imidacloprid) are hoping to have it lifted very soon.

On one occasion, however, a massive loss of bee colonies could be directly linked to the use of a neonicotinoid pesticide. This was a regional die-off that happened in southwest Germany in the spring of 2008, when 700 beekeepers reported the loss of 11,500 colonies. Official investigations linked the problems to the pesticide clothianidin, produced by Bayer under the trade name Poncho Pro.

2 million (?1.8 million) compensation to the beekeepers affected, but insisted that it was not the chemical as such that was to blame. According to Bayer, inappropriate procedures used in the production of one batch of maize seed impregnated with the chemical were the root of the problem. Combined with the wrong type of seeding apparatus and strong winds, this fault allowed the pesticide to be dispersed widely and to affect bees.

The German government had initially banned clothianidin for use on maize and rapeseed, but the bans were lifted after the problem was resolved. Thus, this case doesn’t hold the answer for the problems observed in the US and other countries either.

However, beekeepers in the UK and elsewhere are still suspicious of the insecticides. The recent documentary The vanishing of the bees2 has highlighted the uncertainty surrounding these products. The film was supported by the UK ethical company, The Co-operative Group, which simultaneously launched its Plan Bee initiative, including various outreach activities and a ?150,000 grant for research into bee health.

The British Beekeepers Association (BBKA) has also emphasised the need for more research, and has continued to ask the government for more funding for research into bee health and specifically into the safety of insecticides. Commenting on the loss of 20 per cent of the UK’s colonies in the winter of 2008-09, BBKA president Tim Lovett said: ’It underlines the need for research into the causes and remedies for disease in order to ensure that our principal economic pollinator, the honeybee, can survive the onslaught of the threats it currently faces.’

Is it the lifestyle? 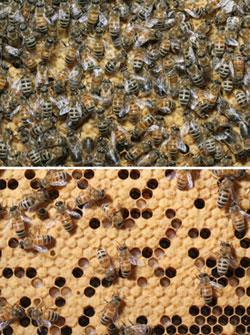 In their 2008 book A world without bees,3 journalists and amateur bee keepers Alison Benjamin and Brian McCallum describe how, in the US, large monocultural areas are serviced by beekeepers who ferry their colonies around the country in truckloads. For instance, a 400 mile stretch of California’s central valley has almond trees and nothing but almond trees. Each year in February, peripatetic beekeepers come there with 40 billion bees for a week-long pollination stint, the best paid work they can get for their insects.

The authors and many other environmentalists have suggested that this stressful lifestyle may play a significant role in CCD. US beekeepers counter that they have been trucking beehives across the continent for five decades now and it has always worked fine. That argument, however, doesn’t rule out the possibility that stress is one of the factors making bees more susceptible to other problems, such as pathogens and insecticides.

Mike Edwards, a field ecologist who studies native wild bee species with the UK’s bee conservation group Hymettus, thinks the lifestyle is definitely a big part of the trouble. ’The major problem with the honeybees is domestication,’ he says. That includes the loss of genetic diversity in industrially produced and employed bee colonies, and the poor diet they get when forced to work large monocultural surfaces.

However, Edwards is unimpressed by the beekeepers’ worries, as he thinks that some of their pollination work would be done more efficiently by wild insects anyway. ’The honeybee isn’t even a very good pollinator,’ he says, ’because it only wants the nectar and only spreads a little bit of pollen accidentally’. Natural pollinators such as solitary bee species could actually do a better job for crops such as melons, Edwards maintains.

But these pollinators are also threatened by decline. ’Wild bee diversity in many landscapes in the UK is lower now compared to the 1960s and 1970s,’ says Koos Biesmeijer, an expert in bee behaviour from the University of Leeds, UK.

’Even though there are more wild bee species declining than increasing, some species thrive in our modified urban and rural landscapes. The bees that still thrive tend to be generalists in habitat or diet. This indicates that suitable habitat and floral resources are important factors underlying bee declines and shifts,’ Biesmeijer says, summarising the findings of his recent research.4

Thus, by providing a rich habitat with a variety of flowering plants, farmers and gardeners could encourage natural pollinators. ’The trouble is’, says Edwards, ’that many farmers don’t even know these pollinators exist’.

From 2005 to 2008 Edwards was involved in an industry-sponsored project aiming to bring back bumblebees and other natural pollinators to agricultural land. Launched in 2005 by the Swiss-based agrochemical company Syngenta and later also backed by the UK supermarket chain Sainsbury’s, Operation Bumblebee, encouraged farmers to create conditions favourable for wild bee species. Within the first year the project could celebrate the return of the Bombus ruderatus, a rare bee species which had not been seen for 50 years.

The bugs and the bees

Meanwhile, researchers looking into honeybee pathogens claim that they, too, could play a role in the current crisis. Mariano Higes and colleagues at the Bee Pathology Laboratory in Marchamalo, Spain, have investigated colony losses suffered by two professional beekeepers, and concluded in both cases that infection with microsporidia (single-cell fungi) of the species Nosema ceranae  was the root cause.5 The researchers suggest that treatment with the antimicrobial fumagillin may banish this particular threat.

Another notorious bee parasite that is under suspicion of contributing to the problems is the varroa mite (Varroa destructor  ), which is now affecting bee colonies around the world except in Australia. Once mites have entered a hive, they hijack the breeding cycle of the colony, so their larvae develop alongside the bees and leave the cell with them, feeding on their ’blood’(haemolymph) and thereby spreading viral infections. Untreated, a varroa infestation is likely to kill off the colony within a few years. While there are chemicals designed to protect hives from the mites, the correct application of these has also come under scrutiny in the context of CCD. 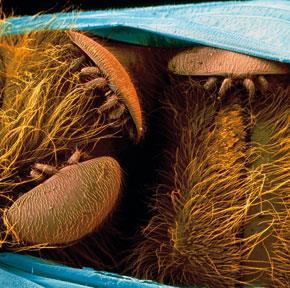 Varroa mites (shown above, about 2mm wide, on the surface of a bee) can kill off a colony in a few years

Surprisingly, however, the first systematic study comparing gene expression in bees sampled before and after the arrival of CCD failed to detect upregulation of the immune response, which one would expect in case of a major parasite threat or fungal infection. The work conducted by May Berenbaum’s group at the University of Illinois at Urbana-Champaign, US, made use of the published genome sequence of the honeybee and used microarrays to study the expression of thousands of genes by analysing the messenger RNAs, ie the working copies of a gene which the cell produces as a template for protein synthesis.6

The main difference that the researchers found was the presence of RNA from the ribosome, the cell’s protein factory, in the CCD samples, which they interpret as hallmarks of ribosome degradation. Freshly made ribosomal RNA should not have shown up on the arrays at all, as it doesn’t carry the kind of label that identifies messenger RNAs. Whether this label can be attached to ribosomal RNA during degradation remains to be confirmed.

If ribosomes get degraded, the culprit may be found in a group of viruses known as picorna-like viruses (from pico-RNA, as in very small RNA genomes). Among the RNA transcripts they analysed, the researchers also found genes of such viruses, including Israeli Acute Paralysis Virus, which had also been fingered as a possible culprit in an earlier study. They also detected genes of Deformed Wing Virus, another picorna-like virus, which British researchers have recently linked to colony losses in the UK.7

’In the absence of functional ribosomes’, Berenbaum concludes, ’bees would be hard pressed to respond to any of the multiple stresses to which they are subjected in 21st century apiculture - pathogens, pesticides or nutritional deficiencies.’

While her findings don’t suggest an immediate cure, she expects that the diagnostic presence of ribosome fragments will help researchers find out whether colony losses in other parts of the world are related to the CCD phenomenon in the US or not.

Simultaneously, a descriptive study of the phenomenon published by Dennis vanEngelsdorp and coworkers at Pennsylvania State University, US,8 also came to the conclusion that ’CCD involves an interaction between pathogens and other stress factors’. Biesmeijer agrees: ’the interactions between several causes have been rarely assessed, but might well be the real explanation for bee declines.’

A world without bees?

So what can be done to save the bees? If colony losses and the decline of wild bee species are as complex and multifactorial as they appear right now, this means that there is no single measure that can cure the malady. Habitat improvement measures like Plan Bee and Operation Pollinator can help a bit.

But the overwhelming impression one gets from descriptions of the industrialised pollination practices, as in A world without bees, is the image of a single clone of plants being pollinated by a single clone of insects. The loss of genetic diversity makes both sides of the equation extremely vulnerable to all kinds of threats.

In their book, Benjamin and McCallum come to the conclusion that ’nothing less than a transformation in our treatment of honeybees will avert disaster.’

Michael Gross is a freelance science writer based in Oxford, UK