Carbon dioxide and depleted uranium both put to good use

European scientists have synthesised uranium complexes that take them a step closer to producing commodity chemicals from carbon dioxide. 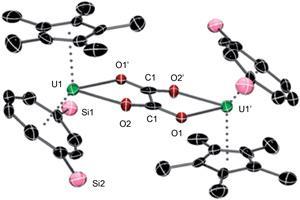 Widespread fossil fuel depletion and concerns over levels of climatic carbon dioxide are motivating research to convert this small molecule into value-added chemicals. Organometallic uranium complexes have successfully activated various small molecules before. However, there were no reports of an actinide metal complex that could reductively couple with carbon dioxide to give a segment made from two carbon dioxide molecules – an oxalate dianion.

Not only has this now been achieved, but simply changing the alkyl group on the cyclopentadienyl ring of the uranium(iii) sandwich complex has a remarkable effect on carbon dioxide activation, enabling selective tuning of the resulting reduction products.

Geoff Cloke’s group at the University of Sussex, UK, and computational collaborators at the University of Toulouse, France, found that a small methyl group gives both bridging oxo and oxalate complexes; intermediate ethyl and isopropyl substituents give bridging carbonate and oxalate species; while bulkier tertiary butyl gives only the bridging carbonate complex. The oxalate formation is particularly important as it involves making a C–C bond directly from carbon dioxide. This is a fundamentally important but seldom reported transformation.

Uranium(iii) lends itself to small molecule activation for a number of reasons: it is a strong reducing agent with a U(iii)/U(iv) redox couple electrode potential of around –2.5 V and, unlike transition metals, it is not constrained by the 18 electron rule and overall has pretty unique reactivity. These characteristics do however make handling such extremely air sensitive and reactive compounds challenging. While the chemistry is still far from large-scale production for industrial applications, Fang Dai, a chemical engineer at General Motors, US, points out that it ‘provides a solid basis for further exploration of both chemical activation of carbon dioxide and corresponding organo-actinide chemistry’.

Finding an alternative use for depleted uranium – which has almost negligible radioactivity and is in plentiful supply – to its typical use in military applications is certainly desirable. What’s more, controlling the selectivity and establishing different mechanisms and key intermediates of reductive activations could lead to reductive coupling of more than one type of small molecule. Cloke raises the ‘fantastic’ example of creating a dicarboxylic acid uranium derivative by reductively coupling carbon dioxide and ethene: ‘Dicarboxylic acids such as adipic acid are used in making nylon, so to make them directly from carbon dioxide would be very attractive. Although making a catalytic system would undoubtedly be challenging, demonstrating this idea is the next, very important, step.’