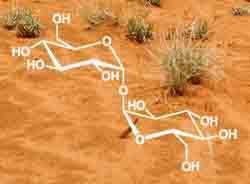 Salvatore Magazu and colleagues at the University of Messina, Italy, have used a specialised spectroscopic technique to examine interactions between molecules of trehalose and water.

The results could explain the unique biological properties of trehalose, said the researchers, which are not shared by other sugars with identical chemical formulae.

Trehalose (C12H22O11) is a common component in the cells of many plant and animal groups. It protects desert species from damage during periods of drought and can promote survival in extreme heat and cold.

Several theories have been proposed as to why trehalose exerts far greater protective effects than other disaccharides like sucrose and maltose. These include suggestions that its special properties are due to a higher glass transition temperature or that it forms direct hydrogen bonds with lipids in cells, replacing similar bonds with water molecules.

The data show that trehalose creates a more crystalline formation with neighbouring water molecules than that created between water molecules and the two similar disaccharides. Trehalose modifies the structural and dynamic properties of water, forming a unique entity with water molecules which makes it better able to protect biological structures, Magazu explained.

’It’s a nice experiment,’ said Jane Vanderkooi, professor of biochemistry and biophysics at the University of Pennsylvania, US. ’They showed that a trehalose-water complex is more rigid than other sugar complexes. This rigidity would protect against high temperatures. But looking at the water itself, the water molecules next to trehalose are more flexible than bulk water. This would protect biological molecules against cold, because it would be harder to form ice.’ John Bonner