A breath of fresh water

Semi-aquatic animals can smell their surroundings under water 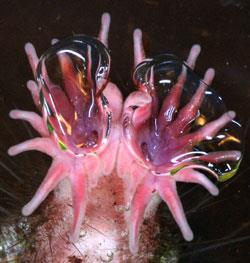 Some semi-aquatic animals can smell their surroundings under water, report US researchers. The news overturns received wisdom that underwater olfaction is impossible - because a sense of smell relies on the ability to sniff air - and raises the possibility that subaquatic odour detection might be a widespread skill.

Sniffing under water is, of course, not to be recommended. But Kenneth Catania and colleagues at the Vanderbilt University, Tennessee, have found that some diving mammals can do just that. Catania’s team noticed that star-nosed moles and water shrews exhale a continuous stream of bubbles as they dive down after food. They noticed, on further examination with a high-speed video recorder, that the animals were continuously emitting and re-inhaling the air.

The volumes of air expired and re-inspired (60-100 microlitres), the cyclic frequency (about 10 times a second), and the fact that the animals are doing this while hunting for food, convinced the researchers that this was underwater sniffing.

Odorant molecules are all water soluble - otherwise they wouldn’t be picked up along the damp lining of the nose - so the smells are down there even if we humans can’t pick them up. 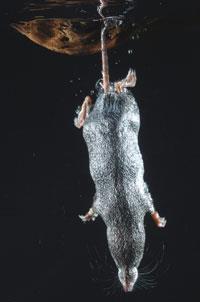 Water shrew sniffing its way to the next meal

Catania’s team tested the hypothesis that the aquatic shrew/mole phenomenon they had measured performed a sensory role. They put food on the floor of an aquarium, and watched the animals sniffing it out. They ruled out the possibility that the star-nosed moles were using their super-sensitive appendages to detect food by putting the food source behind bars. The grid left gaps big enough to let the moles’ air bubbles through, but small enough not to let their amazing nasal appendages through.

’The question is, what other semi-aquatic mammals do this?’ asked Catania. ’Do animals like otters and seals do anything similar, or is there a size limit and it only works for smaller mammals?’ He hopes the study will prompt other researchers to set about answering these and other questions surrounding this newly discovered branch of olfaction.