A foaming protein from the horse’s mouth

Structure of latherin solved, suggesting a novel mode of action for the foaming protein

Proteins that act as surfactants are extremely rare. One of the very few examples is latherin from the sweat and saliva of horses, which can also trigger allergies in humans. Researchers in the UK have solved the structure of this protein, yielding tantalising hints to a novel kind of surface activity and to evolutionary connections to other examples.

Biochemists know that a protein solution beginning to foam is always bad news – it means the protein is losing its structure. Very few proteins are naturally meant to foam, the best studied being the components of foam nests produced by frogs.  But horses produce an unusual foaming protein, known as latherin, in their saliva and sweat. Researchers assume the protein first arose in the saliva to help mastication of large amounts of dry food and was then co-opted into wetting the horse’s pelt. 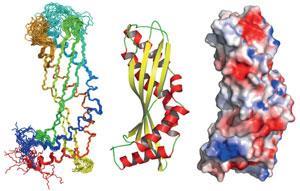 The groups of Brian Smith and Malcolm Kennedy at the University of Glasgow have now solved the structure of latherin in solution after several years of study by NMR spectroscopy.1 ‘The unusually high leucine content made it particularly challenging to link NMR signals to specific amino acid residues,’ explains co-author Alan Cooper. A separate technical paper provides details of how the authors overcame that challenge.2

Latherin turns out to possess a cylindrical shape with an architecture, while not new, is relatively rare. Based on comparisons of the shape of the protein in solution with parameters for the protein when it forms foams,3 the researchers suggest that the cylinder may split open lengthwise and unfurl to flatten out on the water–air interface. In its soluble, monomeric form observed by NMR, the protein doesn’t have an obvious amphiphilic character, but flexible areas in the structure would allow the cylinder to open, making the protein it flat and amphiphilic.

Vania Melo, who investigates biofoams at the Federal University of Ceará, Brazil, welcomed the advance, as providing ‘insights into the intriguing mechanisms responsible for the surfactant activity of latherin.’  In comparison to the frog foams, she adds that although the different proteins do not share significant similarities in sequence or structure ‘the conformational change seems to be the common feature between them.’

As latherin is also the culprit in some but not all horse allergies, knowledge of its structure may also help to shed light on that condition.  In addition, determination of latherin’s structure has also enabled the Glasgow team to suggest structures for the PLUNC family of human proteins (palate, lung, and nasal epithelial carcinoma associated proteins) whose structures have not yet been determined experimentally.