A green and salty chiral catalyst

An efficient, chiral, salt-based hypervalent iodine catalyst has been discovered by Japanese chemists that could replace toxic metal catalysts without generating the waste or explosion risks associated with hypervalent organo-iodine complexes.

Oxidative coupling reactions, where two molecules (or parts of the same molecule) are joined together by oxidising one of the partners, are useful synthetic transformations - especially when they can be done with control over which chiral form of the final product is produced. However, most current methods involve toxic or rare transition metal catalysts.

Environmentally benign hypervalent iodine reagents (containing oxidised iodine I=O bonds) are attractive alternatives. But as Kazuaki Ishihara from Nagoya University explains, organic versions - where the iodine is bonded to an aromatic ring - are often shock sensitive explosives and need to be regenerated using oxidants like meta-chloroperbenzoic acid (mCPBA), which generates a lot of waste.

To try and make these reactions a bit greener, Ishihara’s team took the radical step of swapping iodine bonded to carbon for an iodite (IO2-) or hypoiodite (IO-) anion as the oxidant, which can be generated from iodide (I-) by simple oxidants like hydrogen peroxide - the only waste being water. To solubilise the inorganic iodite in organic solvents and provide a chiral environment to control the geometry of the reaction, the team coupled the (hypo)iodite with a chiral quaternary amine counterion. Similar salts have been used to carry acidic or basic ions from aqueous phases into organic solutions, but never with redox reactions. 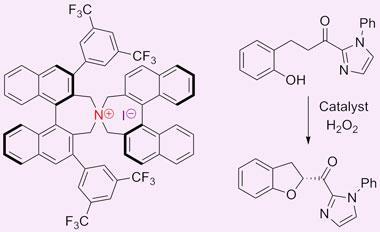 The ammonium salt catalyst is cleaner, greener and more efficient than other hypervalent iodine or transition metal catalysts

The salt catalyst worked spectacularly well. ’This is the highest selectivity with the lowest catalyst loading ever seen in asymmetric hypervalent iodine catalysis,’ said Ishihara. However, he admits that the group doesn’t really understand quite how the chiral ammonium ion exerts its control over the reaction geometry.

Andrew French, from Albion College in Michigan, US, is excited by the work. ’These are relatively simple chiral aromatic ammonium salts,’ he says, ’so by tweaking the aromatic groups you can tune the reagent - you don’t have to worry about long syntheses.’ He adds that the salts should be recoverable at the end of the reaction and should make work-up and purification easy as they will be water soluble.

Ishihara is keen to expand the scope of the discovery. ’We believe that a variety of oxidative coupling reactions can be controlled by these salts in place of transition metal catalysts,’ he says. One of the team’s primary goals is to make an intermolecular version - joining two molecules together rather than reacting two sites on the same molecule. ’But this is much more challenging,’ Ishihara adds.