A MOF that goes off with a bang 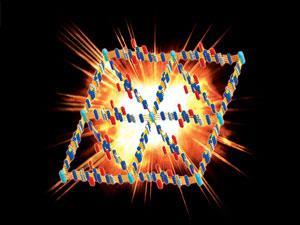 The versatility of metal–organic frameworks (MOFs) has been explosively demonstrated by chemists in China who have synthesised highly energetic three-dimensional MOFs. One of these MOFs has a heat of detonation significantly greater than any similar metal-based high energy compound. The researchers suggest that the work could lead to a new family of metal–organic explosives with a three-dimensional architecture.

Linear metal-containing polymers have been made which are highly energetic, but are unstable because of the floppiness of the molecular structures. Two-dimensional MOFs are relatively stable, but less energy can be packed into the sheet structures.

‘Energetic materials and systems with substantially enhanced performance, reduced sensitivity and controlled energy release are critical enablers for the development of future capabilities,’ says Siping Pang of the Beijing Institute of Technology, a member of the research team. ‘In existing explosives the requirements of insensitivity and high energy are quite often contradictory to each other.’

The Chinese researchers resolved this conflict by creating rigid, three-dimensional high energy MOFs. The new MOFs are based around the nitrogen-rich heterocycle 4,4’-azo-1,2,4-triazole and nitrate anions coordinated by either copper or silver atoms, which stabilise the complex. ‘The 3D energetic MOFs have high nitrogen content, super high heats of detonation, since they contain the nitrogen-rich heterocyclic ligand, energetic anions and 3D high-strain frameworks which can be released as additional energy upon detonation,’ says Pang. The copper-containing MOF has, says Pang, the highest heat of detonation of any known metal-based energetic compound. 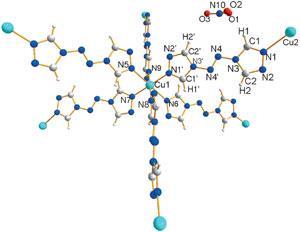 The co-ordination structure of the explosive MOF

In addition, says Pang, the new compounds exhibit good thermal stability, low impact sensitivity and low sensitivity to friction and electrostatic discharge. ‘It is probable that the strong structural reinforcement in the 3D frameworks facilitate the rigidity of the molecule,’ he adds. ‘The sensitive nitrate anions and metal ions are encapsulated within the 3D structure, resulting in low sensitivity.’ Pang says the MOFs are relatively simple and inexpensive to synthesise, with all the materials being commercially available and with water as the reaction solvent. It should be possible to extend this family of explosive MOFs by using different ligands and metals, he says.

Fraser Stoddart of Northwestern University in Illinois, US, an expert on molecules with novel 3D architectures, says: ‘Although the more sinister part of our world needs another high explosive like a sore head, there are fields of human endeavour where there is room for their improved performance. This report of research into 3D high-energy materials is destined to influence the next generation of explosives, given their enhanced heats of detonation and significantly decreased impact sensitivities when put alongside conventional energetic materials.’ Stoddard adds: ‘I worry, however, about latter day Guy Fawkes.’