Australian and US chemists have re-shaped our understanding of an important photochemical reaction that defies classical transition state theory and proceeds via multiple barrierless ‘roaming’ pathways. 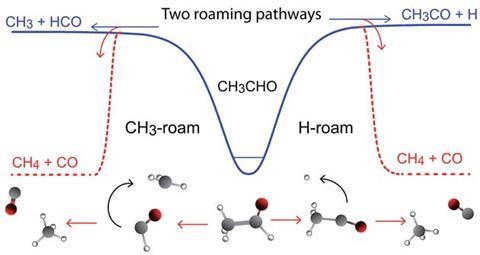 Traditional teaching has it that chemical reactions proceed from reactants to products via a transition state, and must overcome an energy barrier associated with bond breakage in the reactant species. In recent years, a new class of reaction pathway known as roaming has emerged. Roaming reactions do not follow such a clearly defined pathway, and can be thought of as ‘barrierless’. Although the concept was first observed with CN and O2 in 1993, it was later conclusively demonstrated for hydrogen atoms in the photodissociation of formaldehyde. Developing products do not have sufficient translational energy to fully separate, causing the insipient hydrogen atom to ‘roam’ around the formyl radical (CHO) until an abstraction reaction results in the formation of carbon monoxide and hydrogen gas. Similar behaviour was later observed for methyl groups in the acetaldehyde photodissociation reaction, however, ambiguity about the extent of roaming in this reaction has always remained.

Scott Kable, at the University of New South Wales, Australia, and international collaborators, probed the rotational and translational distributions of acetaldehyde photolysis products methane and carbon monoxide to settle the matter. To their surprise, two roaming pathways were found: methyl radicals (CH3) roaming about the formyl radicals and hydrogen atoms roaming about the acetyl radicals. Remarkably, the group found no evidence for the classical transition state pathway.

But why is this relevant? Acetaldehyde is a principal component of photochemical smog and is produced in the atmosphere when volatile organic species, originally released by plants, degrade. ‘Understanding acetaldehyde photochemistry remains an important topic for atmospheric chemists and its decomposition pathways are of real interest,’ notes Andy Beeby, a photochemistry expert at Durham University, UK.

It is widely believed that the most important reactions in atmospheric systems comprise bond-cleavage reactions which involve roaming channels. ‘The issue for atmospheric and combustion chemists is that there is no tractable theory for roaming reactions, so pressure, wavelength and temperature-dependent rates cannot be calculated,’ Kable tells Chemistry World.

The team are employing a number of experimental and theoretical approaches to further understand the roaming pathways for other atmospherically-relevant molecules to develop the kinetic theory of roaming reactions to the same level as traditional transition state reactions.