Across the barrier for tumour imaging

A probe that can cross the blood-brain barrier to allow high sensitivity brain tumour imaging has been made by Chinese scientists. The probe could be used to pinpoint the location and extent of a tumour before an operation and be used for image-guided tumour removal.

Establishing the position, extent and structure of brain tumours is crucial for their successful removal. But, current tumour imaging agents used in magnetic resonance imaging are limited by short circulation lifetimes, non-targeted specificity and poor blood-brain barrier permeability. The results of these limitations are that low grade tumours and 20-30 per cent of advanced brain tumours with an intact blood-brain barrier go unnoticed. 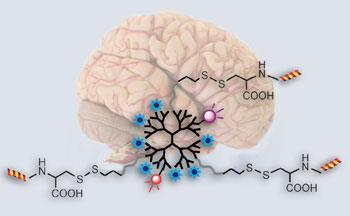 Cong Li from Fudan University, Shanghai, and his team made the probe starting with a dendrimer - a branched molecule with a long circulation lifetime - and attached functional groups with different tasks. One such group, a lipoprotein ligand angiopep-2, helps to deliver the probe across the blood-brain barrier and targets the lipoprotein’s receptors, which are present in increased amounts on tumour cells. High-resolution images can be generated thanks to imaging reporters, including fluorescence dyes, attached to the dendrimer.

The team tested the probe in mice given a human brain tumour graft and they found that the probe displayed high targeting specificity, high sensitivity and low systemic toxicity in comparison to a control probe.  ’The nanoprobe holds promise to non-invasively delineate the brain tumour boundary, especially for low grade or early stage tumours with uncompromised blood-brain barriers,’ says Li.

’Functionalised nanoparticles are hugely topical as medical imaging probes, but this dual modal dendrimer-based system offers a fascinating alternative motif,’ says Nick Long, an expert in bioimaging from Imperial Collage London, UK. ’Its chemical tenability, alongside efficient brain tumour visualisation and a clever way to circumvent the blood-brain barrier make this a most interesting and important contribution.’

Li’s team plans to improve the biocompatibility of the nanoprobe and promote its clinical use in the future.